Well, I was going to answer comments from my Assassin’s Creed 2 review, but it seems all anyone wants to talk about is how my voice sounded different, and how this apparently reduced the entertainment value by a significant percentage. OK then.

Basically, it’s been a bad week for lovers of my voice. I’ve had my usual dose of the seasonal flu for the last couple of weeks and it’s just moved into the wonderful phlegmy phase. And on top of that, the morning of the video’s recording, my headset mic stopped working. I had to record using a Guitar Hero mic plugged into the USB port.

I used that original headset to record every single episode of ZP up ’til now. That mic put up with two years of full-bodied swearing.

Let’s take a moment to remember a faithful friend.

The headset was bought for $2.50 from a cheapo store in Annerley, south Brisbane, because the ear buds I was using at the time were causing waxy buildup that was frankly quite horrific. But when it came time to record voices for a new video series, who could have guessed that a headset mic from such humble origins could produce a sound quality that could only be described as “adequate?” Indeed, some months later I even bought a considerably more expensive headset, because the ear padding on the originals was getting a bit tatty, but the recording from the newer device sounded like a dog with its head stuck in a big tin bucket.

The $2.50 headset was faithfully supportive for over two years, but was satisfied with a career out of the spotlight. Its moment of glory came, however, during the live-action section from the Uncharted 1 review. My hat had unexpectedly fallen ill from myxomatosis and an understudy was required at very short notice, but the headset stepped up to the plate and did us all proud, to absolute viewer indifference.

So this one’s for you, defunct cheapo $2.50 headset mic. May you have many great days ahead of you at your new home in the kitchen bin. As for the rest of you, I’ve now had time to buy a new headset, so expect normal service to be resumed next video. Sound quality should be even better. This one cost five bucks.

“It’s obviously not Yahtzee. It’s not just that he sounds different, he even pronounces words differently. Let’s hope this is a one time thing.”
–Kariodude, from the Assassin’s Creed 2 comments

This was the gist of quite a few comments last week, people assuming we’d pulled a fast one and used a stand-in. No. Just to confirm, I had a bit of the summer flu and was using a different mic. No substitutes or alien body snatchers.

It does make me wonder about people who genuinely believed this, though. What sort of arrangement do you think this is? Do you think I have the resources to go out and hire some kind of perfect voice double at a moment’s notice, while most of the people in the world who share my accent live 12,000 miles away? No. Sorry to disappoint, but my entire production crew is me, a headset, a laptop, and a desk in the corner of my bedroom. My morning work commute consists of walking about three feet, discounting detours for a shower and some raisin toast. If I ever become completely incapable of speech you’ll know about it, because I will use a voice synthesizer and the video will sound like it’s being guest presented by Stephen Hawking. 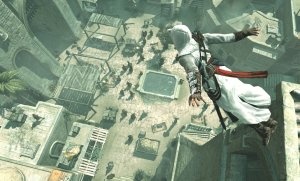 “It’s not actually different; this is how he originally sounded, back around the middle of ’07. He didn’t speed up his vocal track back then, or at least not as much. So, to anyone wondering, his voice sounds higher-pitched in the majority of reviews because he sped it up a bit (hence how he also talks so fucking fast. You’d have thought most people could figure that out).”
–CuddlyCombine

I’m quite impressed by people who can affect such an authoritarian tone when reciting facts they’ve blatantly pulled out of their arse. I have never artificially sped up my voice. I’ve only ever cut out pauses for breath, because no-one wants to hear me panting like an overworked horse after every third sentence. My early reviews were a little lower and slower because I was still settling into a groove. In fact, funnily enough, my very first review for The Escapist (Heavenly Sword) was also beset by a sudden onset of flu. So, shut your fat face.

Alright, enough about my sodding voice. Ask me something about the game.

“So what…is the game worth buying or not? It was a decent review, but I still don’t know if I should pick up the game or not. Yeesh.”
–Neesa, from the Assassin’s Creed 2 comments

Thank you. Yes, do pick up the game. It’s probably going to end up hovering somewhere around my Top 5 for 2009. As I’ve frequently said before, it’s my nature to find criticism, and everything about the experience I don’t directly reference is probably A-OK. While it does take a while to get going (you don’t even assassinate anyone until about an hour or two in) and it carries a lot of vestigial features, there’s more than enough good in there that stays largely untainted by the bad.

As for whether Assassin’s Creed 3 will be worth checking out, I’m a little cautious. It’s fairly heavily implied that the next one will be about the antics of Future Desmond, having learned all he can learn from his two ancestors in Screed 1 and 2, but while exploring the shiny white byways of a future city Screed-style does hold some appeal, I found all the non-Ezio bits of Screed 2 rather dreary. The branching storyline is getting lodged just a little bit too far up itself, and I pretty much gave up trying to understand it around the point I was being lectured at by some glowing lady who looked like something Captain Kirk might get his chubby little leg over at the end of a Star Trek episode.

Plus, while Altair was naïve but determined, and Ezio was hot-headed but dutiful, Future Desmond just comes across as, well, a bit of a smarmy ponce who I don’t relish having to put up with for an entire game. Plus, his girlfriend looks like a frog.