E3 2010 was disappointing, to say the least, and as pathetic and infuriating as watching a beaten spouse run back to their tormentor to ask for more, to say the most. The biggest elephant in the room – that only the most determined fun-killers seemed to want to point out – was that both Microsoft Kinect and PlayStation Move are legendarily shameless follow-the-leader corporate knock-offs that want Nintendo’s fat market share so bad it burbles like foam about their champing teeth. Kinect’s controller-less aspect may earn it some interest from the gimmick crowd but I want it on record now that I prophecize definite doom for PlayStation Move, if not both of them.

I am grateful to E3 for helping me get my thoughts together and realize exactly what it is about motion controls that I find so distasteful. It’s not the Wii’s hardware issues. Even if a motion controller had instantaneous 1:1 in-game effect and could register every possible movement right up to holding it outside a window with the end stuck up a cat’s arse, it’s a problem with the concept as a whole. It’s an attempt to cobble together an aspect of the hypothetical future of gaming that misses the point completely.

See, the hypothetical ultimate model of gaming is total immersion. The whole Matrix thing. Plugging your brain into a virtual world that you see with your own eyes, feel beneath your own feet, and commit genocide upon its inhabitants with a napalm launcher in your own hands. Technology is still a long, long way from this, though. I’m talking about a direct neural interface here, something that plugs into your spinal cord and diverts the signals from your brain to the computer avatar, so your own body doesn’t move, but the one in the game does. You think “do a hip thrust,” your own body stays still and Captain Jockbugger on the Planet Killtron debases himself for the enemy.

What this is is the shortest possible connection between intention and in-game action. “Shoot that guy,” think you, and lo is that guy shot. Thought → action. That’s what technology should be working towards. Standard controllers have a far shorter brain-action delay than motion controls. The movement of our actual, physical bodies is minimized to the tiny finger-jerks it takes to press a button. Thought → tiny movement → action. You can’t yet put your mind wholly into the game, but you can channel it through your thumbs while the rest of your body lies as dead and motionless as it would in our hypothetical future Matrix containment tubes. It takes a little while to get used to it, and figure out what buttons apply to what actions, but hey, it took a while for you to learn how to read, too.

Motion controls, meanwhile, are thought → large movement → however long it takes for the console to register that movement → action. It’s not immersive, it’s going in completely the opposite direction to being immersive.

I’m not particularly big on films, but I do love hearing from film critics, because, hey, we’re all in roughly the same trade. Roger Ebert I already said I like, and I always put Mark Kermode’s radio show on when I’m working on ZP. And both those critics have expressed dismay for the rise of stereoscopic 3D in films. I’m beginning to see that motion controls are to me what 3D is to Ebert and Kermode. A desperate gimmick being overplayed in lieu of any lasting innovation, which sufficiently impresses Joe Tosspot but leaves the critics – the actual thinkers and philosophers of the industry, the ones concerned with the cultural substance of it all – waving their arms trying to get everyone to see just how shallow it really is. 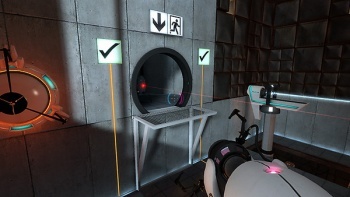 “I think that 3D games could be very immersive. Imagine if you are in the middle of a battle and bullets and grenades and all types of projectiles are flying past your ears, and really see the depth of a game. I think 3D gaming could be one of the most immersive ideas ever.”
– ActionDan

If you actually believe that the Nintendo 3DS is going to be like this, then you’re probably the sort of person who ordered X-ray specs out of the backs of comic books as a kid. I haven’t seen how it works myself – there’s that advertising problem I mentioned, it’s impossible to tell from photos or video – but I assume it’s going to be a similar effect to the stereoscopic 3D that the movie studios trumpet. And stereoscopic 3D is in the same boat as motion controls: It’s a crude imitation of a hypothetical future technology that gets us nowhere. The ultimate future of the TV screen would be some kind of holographic output, where the viewscreen perfectly resembles an actual window into the world beyond, rather than an animating 2D image. Stereoscopic 3D is just a parlor trick. It’s an interesting effect that is an unusual quirk of humans having two eyes. It’s not a step towards that possible future, any more than a cardboard cut-out of Henry VIII is a step towards the invention of time travel.

But moving on. Regrettably, in my last video, my ongoing antipathy to technology innovation left me with little room to talk about many specific game titles from E3, with one fairly notable omission:

“How did he not mention Portal 2? I thought we’d finally get a “Woohoo!” out of him…”
– fairinheight

Portal 1, regular viewers will remember, is the only game in my entire career that I couldn’t think of any criticism for off-hand (bar the length, maybe, but at least it didn’t outstay its welcome). Regular viewers will equally be aware that I don’t buy into hype in any of its forms. I never play demos and the teaser videos have changed my opinion on Portal 2 as much as any preview video does: not in the slightest. Because I don’t have an opinion, and won’t have one until I actually play the thing. The proof of the pudding, friends, is in the eating. Admittedly, the resume of the chef making this particular pudding is impressive enough that one might reasonably expect a decent feed, but I’ve been burned before by such assumptions.

Some people asked me if it was actually me doing the voice of the robot sidekick in the most recent gameplay video. I can now put on record that it is most definitely not. Not that I’d be unwilling to do so if you’d be willing to pay for the flight out again, Valve.