First of all, I’d like to return momentarily to the subject of Mario Galaxy 2. I have to say I’ve really been given cause to reconsider my position on that game, thanks to the arguments of correspondent Chris E., whose eloquent email deserves to be reprinted in full:

You are a faggot. You suck the penis of over 100 different species of animal. You enjoy being raped up the bum by old, hairy men. Your dick is smaller than an average 12 year old’s. All you do is say stupid things on teh internet for a living. You have a fetish for grandmas. Go and fuck yourself. Super Mario Galaxy 2 is the best.”

What a debater. He should take it up full time. That way we could legitimately describe him as a mass-debater.

As a follow-up to my Singularity review (in brief: too much like various other, better games; and yet in many ways not enough like them) I thought I’d take the opportunity to give a little retrospective on games throughout history that have used time travel as a central theme. And I solemnly swear not to bring up Prince of Persia: Sands of Time again. Nor indeed will I bring up the even more time travel-centric Prince of Persia: Warrior Within. Although I guess I just did.

Incidentally my research was aided by this Wikipedia page, which was very convenient. Almost serendipitous, really. Like someone went back in time and informed the world of the past that some day a videogame journalist would quickly need a list of time travel videogames. Perhaps so that he could then knock off work early and be in time to get in front of a bullet intended for the Queen.

I confess this will be a rather incomplete digest, limited to the games I feel like talking about. Bonus points will be given to games that integrate time travel into the gameplay mechanics, rather than just using it as an excuse to run around shooting vikings.

Absolutely dreadful point and click adventure by French developers Delphine Software (who would later create the superlative platformers Another/Out of This World and Flashback) in which a window cleaner discovers a working time machine that exposes him to a conspiracy of extremely indirect aliens that spans the history of mankind. I include it here mainly for cathartic reasons.

I owned the game on my Amiga as a kid, and was stuck for many months on the very first room, in the time before GameFAQs, when dinosaurs ruled the earth. I had a little flag pin. I had a map. I knew I had to stick the flag pin into the map. But the game wouldn’t let me just Use Pin On Map, I was expected to use it on a one-pixel-sized little hole in the map. I wouldn’t mind so much, but why the fuck would there already be a hole, Future Wars? Surely the pin would make a hole for itself? Fuck you, Delphine Software.

Time Travel Analogy: Like Quantum Leaping into the body of Joan of Arc as she burns horrifically to death in terrible agony while onlookers jabber in poorly translated French. 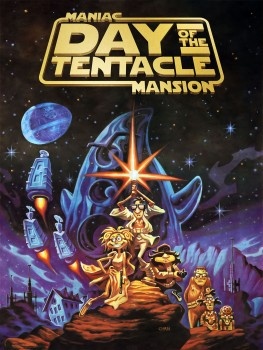 Take note, Delphine Software, this is how you do a time travel adventure game. One of Tim Schafer’s early games for LucasArts back when that company actually tolerated creativity and independent thought within its walls, which was thoroughly infused with his characteristic sense of humor. You control three characters in three different time periods, and a lot of the puzzles involve making alterations to the past to affect the future and finding ways to transfer objects between the cast, often with typically bizarre adventure game logic. There’s a hamster-powered generator in the future but the hamster is in the present, so obviously you should stick the hamster in an ice machine to cryogenically freeze it. But once it’s thawed out in the future it’s too cold and soggy to work, so back in the present you need to put a jumper in a tumble dryer and insert 300 quarters, so that by the time the cycle is finished in the future it’ll have shrunk down to hamster-size. Or perhaps just turn the bloody generator by hand.

Time Travel Analogy: Like pumping helium at Abraham Lincoln during the Gettsyburg Address, basically just for a laugh.

It’s probably one of the most critically panned games in history, but that was largely due to reviewer bias after the overlong development time and lead developer John Romero’s promise to bitchify each and every one of us.

Going by its actual merits, the game is merely atrocious. Mainly because of overambition; for each of the different time periods you visit, a whole new set of weapons and enemies were created, which was no small task in the Quake era. And, incidentally, what the hell use is a shotgun that can only fire 6 times in quick succession, unless you only intend to be fighting enemies who are all lodged in elevators together? However, after Romero left to make his woefully over-imaginative magnum opus the rest of Id Software went on to make Quake 2, a game with the opposite problem of being as dull as a bucket of tiling putty in a wool cardigan, so maybe those guys needed each other, like Lennon and McCartney.

Time Travel Analogy: Like smoking the contents of Timothy Leary’s sink trap and trying to commit suicide by repeatedly banging your head against Hadrian’s Wall.

I mentioned this in the Singularity review and may have implied it was a better game, but thinking about it they’re probably more like even-stevens. Both are fairly generic first-person shooters that want to be Half-Life 2 so hard I could taste it in my thumbs. You’re a scientist in a magic, performance-enhancing suit fighting the oppressive armies of an evil world-conquering scientist you used to work with – sound familiar?

The main difference being that Timeshift actually sticks to its guns and features some amusing time-based gameplay mechanics, including slow motion and reversal (eat that, Singularity), plus the ability to freeze time in place. The problem with that one is that it’s hard to tell if you’ve hit a frozen enemy enough times to kill him, but if Timeshift knew anything about science then the slightest physical tap in frozen time would surely be enough to explode any physical matter and probably also yourself. On the other hand, the evil bad guy looks a lot like Gandhi, which is pretty ironic.

Time Travel Analogy: Going back in time to 2004 and playing Half-Life 2 again.

Why not use the comments to discuss your favorite games with time travel premises, and which effectively use time travel as a gameplay mechanic? You could even bring up Legend of Zelda: Majora’s Mask and no doubt gain the approval of Chris E.