The fairy-tale-meets-real-world series is back for season 4 and doing what it does best: exploring its villains’ eternal struggle with redemption.

Once Upon a Time (Sundays at 8pm on ABC) isn’t just a fairy tale soap opera. It’s evolved into a complex and enjoyable exploration of the struggle for redemption. In between the “heroes” who mostly commiserate about their dysfunctional relationships until the finale when they put aside their personal drama to save day and the “villains” who drive the action until the heroes get their act together, there is the most fascinating characters of all: the villain trying desperately to be a hero. The showrunners know this and spend most of the enjoyable premiere episode focusing on just that. Plus, they really delivered on the Frozen goods teased at the end of last season.

Before we get too far into it, let’s quickly cover where we left off with the denizens of Storybrooke: The Evil Queen’s sister, the Wicked Witch of the West came to town with a plan to open a time portal to stop their mother from giving her up as an infant. But Regina discovered she could perform white magic as well as dark and used it to disrupt her sister’s spell allowing our heroes to capture the green witch. However, the time portal still opened and sucked in Emma and Hook, dropping them into the Enchanted Forest during the time when Snow White was a fugitive and Regina was at the height of her Evil Queen phase. With the help of Rumplestiltskin, the two lovers managed to make it back to the present, but they brought two things with them: Robin Hood’s long-lost wife and a jar that opens to release Elsa, the Snow Queen of Arrendale from Frozen.

Looking to catch up on Once yourself? You can watch the first three seasons on Netflix and catch season 4 on ABC Sunday nights — or watch online at ABC.com or Hulu.

Now, on to the premiere review.

As I mentioned above, the villains seeking redemption are the best characters on the show. Regina, played by the wonderful Lana Parilla, bounces back and forth between scheming murderess and loving mother. Rumplestiltskin, aka Mr. Gold, played by Robert Carlyle, also expertly zig zags between raving all-powerful sorcerer and loving husband and father struggling to do what’s right for his family. At the end of the last season, both of them ended in a good place with Regina embracing white magic and in love with Robin Hood while Mr. Gold had married Belle and gave her the magic dagger that is the source of his power allowing anyone who wields it to control him. But they quickly fall back into old temptations in the premiere.

When Emma had inadvertently brought back Robin Hood’s dead wife from the past, she shattered Regina’s future relationship plans with the Earl of Locksley. This throws Regina in a tailspin and plunges her in self-doubt about whether villains such as herself ever get a happy ending. It doesn’t help that the Maid Marion repeatedly reminds Regina of her past as the Evil Queen. Even some of the town’s residents aren’t convinced that she has turned over a new leaf. When Snow White asks if Regina is ok, Prince Charming snarkily replies “Well, no one has been incinerated so that’s a good start.”

Later, Robin visits Regina to tell her that though he loves her, he has to be true to his vows to his wife, because what is a robber without a code of honor? I love the set design in this scene. It’s at Regina’s house where everything, absolutely everything, including her clothes, are either white, black or grey, but placed in the foreground is bowl of very, very red apples representing her evil past. After being rejected by the love of her life, she reverts to her wicked ways and enlists the aid of her unbalanced magic mirror (played by Giancarlo Esposito recently of Revolution and Breaking Bad). She knows she can’t kill Marion outright to get Robin back as she would be the number one suspect, but she wants the mirror to show her when she met Marion in the past so she can time travel to that point and kill her to eliminate the rival from her present. There is wonderful little humorous aside in this scene where Regina admits she doesn’t remember Marion because she had imprisoned and killed so many people during her reign of terror that she can’t be expected to remember them all.

The mirror shows that during the time when Regina was The Evil Queen (™) on the hunt for Snow White who was living in the Enchanted Forest as an outlaw, she sentenced Marion to death for not revealing Snow’s location. But instead of gleefully acting on this information to go back in time and off Marion, Regina instead sees herself as she was, an unrepentant monster, and isn’t sure she wants to go back to that again.

At the end of the episode an ice ogre (see below) has knocked our heroes unconscious and is preparing to stomp the life out of the helpless Marion. Regina appears, but to watch the death of her rival or save her? There is a moment of delicious tension and then Regina disappears. Her evil ways have won. Or have they? She appears behind the beast and destroys it with a blast of magic. Marion finally admits that Regina may have changed from the Evil Queen she was back in the day. Instead of acknowledging unequivocally that she is good now, Regina tells her “Maybe I’m not a monster. Welcome to Storybrooke, Marion.” Oh snap.

So Regina has chosen to sacrifice her own happiness and is a hero now right? Well, maybe not so much. In the final scene she consults with her mirror and decides the thing that is stopping her from getting her happily ever after is the book of fairytales that tells the fairy tale stories of all the residents of Storybrooke. All she has to do is find the writer and make him change her story. I’m sure that won’t have any long term consequences…

Rumplestiltskin fares no better in his quest to be a good person. Though he has promised to be a good guy to his new wife Belle, the death of his son last season by hands of The Wicked Witch drives him to break that vow. He switches out the knife in Belle’s possession with a duplicate and later uses it on a strange box they find on their honeymoon that transforms the box into…Merlin’s Hat? We’ll see. Disney fans get thrown a bone when Belle and Mr. Gold reenact the dancing scene from Beauty and the Beast complete with Belle’s yellow dress, the Beast’s formal attire and the theme song playing softly in the background. Rumple is being driven to old ways, too, though Regina clearly has the spotlight in this episode. What Rumple plans to do to avenge his son’s death (he already killed The Wicked Witch) is unclear. Either way, lying to his new wife about switching out the dagger is sure to cost him his marriage by season’s end. Though I’m interested to see what trouble he is going to cause with Merlin’s Hat. 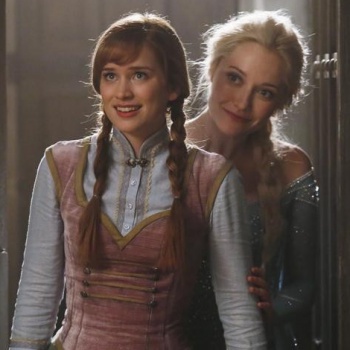 Finally, we get to the Frozen part. I have to give the show credit, they promised you characters from the movie and they delivered on every front but Olaf the snowman. We get Anna, Elsa, Kristoff, the parents and even Sven the moose. In a bit of revisionist history, it turns out that Anna and Elsa’s parents weren’t on a diplomatic mission when their boat sank in a storm. They were on their way to Enchanted Forest because of some unsaid concern about Elsa. Elsa takes this news to mean they were fleeing from her because she is a monster, which fits nicely into the theme of this episode that includes Regina and Rumplestiltskin wrestling with their own monstrous feelings.

In flashbacks we see that though Anna is preparing to get married to Kristoff, she takes off to the Enchanted Forest by boat to find out why her parents were headed there. This sets up a number of mysteries to be explored this season for the Frozen characters. What happened to Anna? What mysterious note did the parents put in a bottle and throw overboard before their ship went down? And how did Elsa end up trapped in a jar in Rumplestiltskin’s vault in the first place?

In present day Storybrooke, Elsa has escaped her jar prison thanks to Emma’s actions at the end of the last season, but finds herself disoriented in modern America. She is almost hit by a car (who the hell thought it was a good idea to let the narcoleptic dwarf drive??) and is so overwhelmed by residents of the town that she summons the ice monster from the movie to protect her from Emma and Hook who discover her hiding. She sends the ice monster to the nearby forest as a distraction when she sees a newspaper front page story about Mr. Gold and Belle’s marriage. She heads to his pawn shop and finds what she saw in the newspaper photo: a snowflake necklace she had given her sister as a wedding gift. Mr. Gold knows something about Anna and Elsa is going to find out exactly what.

Elsa is presented as neurotic, driven and still not fully in control of her ice powers. She is dismissive of those that don’t do what she says in true Ice Queen fashion and is way out of her comfort zone but is determined to find her sister. She has all the makings of another great powerful villain who really is a misunderstood hero, though I don’t think she will be the Big Bad for the season. She’s no unrepentant villain like Peter Pan or The Wicked Witch. She may turn out to be more like a troubled person that turns into an ally a la Hook. And that begs the question, who is the big bad this season? I’m looking forward to finding out while watching Regina, Rumplestiltskin and Elsa work out their own demons.

Bottom Line: A strong start to the season with The Evil Queen and The Dark One slipping back into their old ways and many new mysteries set up around beloved Frozen characters. All the show needs now is a big bad to really get things going.

Recommendation: Another strong season looks like it’s in the works. If you missed this week’s premiere, definitely check it out on your cable’s VOD offerings or online at ABC.com or Hulu.