Episode 9 does a good job tying up loose ends as it barrels toward next week’s season finale.

Here’s what you missed on last week’s Orphan Black: 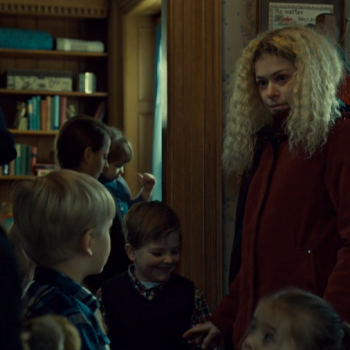 This week’s episode has a heavy dose of Helena at the Prolethean farm. It features Sarah’s struggle with her daughter’s involvement in Cosima’s increasing ailment and also follows Donnie and Alison Hendrix as they deal with Donnie’s misstep regarding Aldous Leekie. Definitely worth a watch, episode 9 ties together plenty of loose ends and simultaneously ramps up for the upcoming finale this Saturday.

Catch the season finale of Orphan Black Saturday at 9/8c on BBC America.

Now, episode 9. This episode opens up with the dark comedy-of-errors that is Donnie and Alison’s attempt to transport Leekie’s body from their car. After wrapping Leekie in a frilly shower curtain and securing his body with pink duct tape, they hide the body in their freezer until they can form a plan for disposal.

Helena is back with the Proletheans and is being walked through the process of her own insemination, step by step, from Henrick. It’s very obvious again that Helena has zero knowledge of her own body when she asks Henrick to explain to her specific parts of her anatomy, though this lack of knowledge isn’t surprising with the way she was raised.

At Dyad, Rachel and Delphine regroup on the state of Cosima’s health, and it’s not looking good. The growths in Cosima’s uterus and lungs have spread further and are now present in her kidneys, esophagus, and epithelial tissue. Rachel continues to push Delphine to bring Kira in, both for Cosima’s health and the long-term health of the other clones. Rachel promises that the promotion she’s giving Delphine to director of the cloning program is not a bribe for Kira, but it’s fairly clear that it is. However, it’s interesting to see the different tactics Rachel uses to obtain her necessary results. She treats Delphine very differently than she did Leekie, with a more gentile nature and more outward kindness toward the scientist, and it works long enough for Delphine to head to Sarah with a plea for help. With Kira’s bone marrow, they could save Cosima and buy some time to allow Ethan Duncan to begin working on a therapy of his own. Delphine tries to reason with Sarah by admitting that even she doesn’t trust Rachel’s intentions, and Sarah calls a clone regroup with Cosima and Alison prior to making her decision. 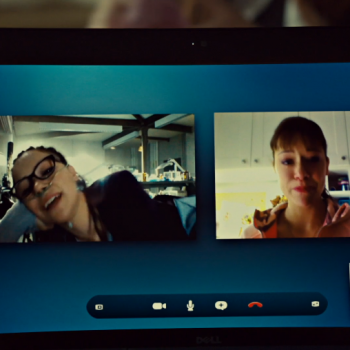 A three-way Skype chat serves as a good refresher of what each clone is going through, from Cosima’s illness to Sarah’s issues with Kira to Alison’s marriage concerns with Donnie. Alison uses the chat as a way to pull information on the official news of Leekie’s death, which remains death by heart attack. With no mention of a murder and even less so of Donnie Hendrix’s involvement, the estranged couple crafts a plan to dispose of Leekie’s body for good: bury him in cement under their garage floor.

Helena gets a chance to venture into the actual society at the Prolethean commune, allowing Helena a chance to meet the children and begin forging the bonds of real familial relations. Meanwhile, Henrick pulls Mark aside for a man-to-man chat where he essentially arranges a marriage between his daughter Gracie and the glorified errand-boy.

Mrs. S comes out of the woodwork with another of her mysterious connections, this time a pediatrician who could perform the procedure to obtain Kira’s bone marrow. Mrs. S and Sarah have a strange conversation with Kira where it’s further shown that Sarah, although with intentions to be a good mother, gets caught up in the fear of losing her clone sister and somewhat pressures Kira’s decision. Having to ask an eight year old to toughen up and give up her bone marrow through a scary procedure is a crappy situation, but again Mrs. S seems to be the only one who is really looking out for Kira’s state of mind by telling Kira that she does not have to go through with it. In the end, Kira bites the bullet and agrees to the procedure, to save her “Auntie Cosima” from possible death. 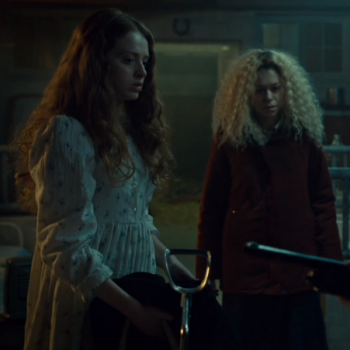 As if Alison and Donnie don’t have it hard enough with the dead body of a prolific scientist in their garage, Vic returns to complicate matters and brings Angie Deangelis along with him. Understandably, the Hendrix’s are fed up with this level of harassment and Donnie finally takes action by confronting the detective. During his “fuck you” monologue, he snaps a photo of Angie and Vic to use as blackmail should they continue their harassment. It’s been nice to see Donnie’s get some of his mojo back by embracing this badass father and husband role, but it’s still concerning that he only got his shit together after he accidentally murdered someone.

Meanwhile, back at the farm, the Proletheans continue to redefine creepy. (Warning, these scenes are intense and include forms of non-consensual acts, so be prepared.) Remember the threat from Henrick that Gracie would carry Helena’s children? Seems like they weren’t bluffing after all. In a double-whammy of creepiness, Gracie confirms that Henrick, in fact, did fertilize Helenea’s eggs…which just so happen to be the same eggs he inseminated his own daughter with. Helena learns from Gracie that it was always Henrick’s intention to impregnate another woman with Helena’s embryos, that way the Proletheans would always have access to Helena’s miraculous genes. The clone decides to leave the Proletheans and, in another swift turn of events, Gracie joins her. The two attempt an escape but are confronted by Henrick, who locks Gracie away in a barn stall. Mark shows to save his intended and Helena attacks the Prolethean leader while the young couple flees the scene.

Helena finally gets her revenge on the Proletheans. She straps Henrick to a gynecologist’s chair and inflicts the same torture upon him as he has done to so many women on the commune. She escapes the farm with what appears to be the rest of her embryos, just in time to watch it burn down thanks to her handiwork.

Meanwhile, all is not as it seems back at the Dyad. Delphine discovers that Benjamin, Mrs. S’ henchman, has been working for the Institute all along. She rushes to tell Sarah about the turncoat, but Rachel beats her to the hospital. She infiltrates Kira’s hospital room dressed as Sarah, knocks out Felix, and kidnaps Kira before taking her to an undisclosed, assumedly-Dyad location. Rachel has obviously put a lot of thought into this because the room Kira wakes up in is decked out for an eight year old girl. Kira asks about her mother and Mrs. S, but Rachel refuses to answer her pleas and instead promises that Kira “may even grow to like it here, just as [she] did”.

The fact that Rachel has kidnapped Kira isn’t all that surprising, but what is new is that she’s seemingly planning to turn Kira into the next Rachel. Every villain needs a legacy and, as the only offspring from the clones, Rachel obviously wants Kira as her own. Now, every person in the Dyad’s employ will undoubtedly be looking for Sarah, possibly even with orders to take out the mother clone, and with only a sickly clone, her doormat of a Monitor, and two geneticists on the inside, it’s not looking good for Sarah and company.

What we need is Helena to come back, guns blazing, and kick Dyad square in the teeth. It’s been established from the first season that Helena views Kira as a member of her own family, so when she gets wind that the miracle daughter has been taken I’m sure it won’t be long before we get round two of Helena’s retribution.

Overall, this show continues to please. The characterization is strong, the pacing leaves no time for fluffy wasted scenes, and Tatiana Maslany’s prowess just keeps growing. This episode was a strong ramp-up for the upcoming finale and did a good job of tying up the majority of loose ends so that we can focus on what’s really important in the next episode: The clones vs. Rachel.