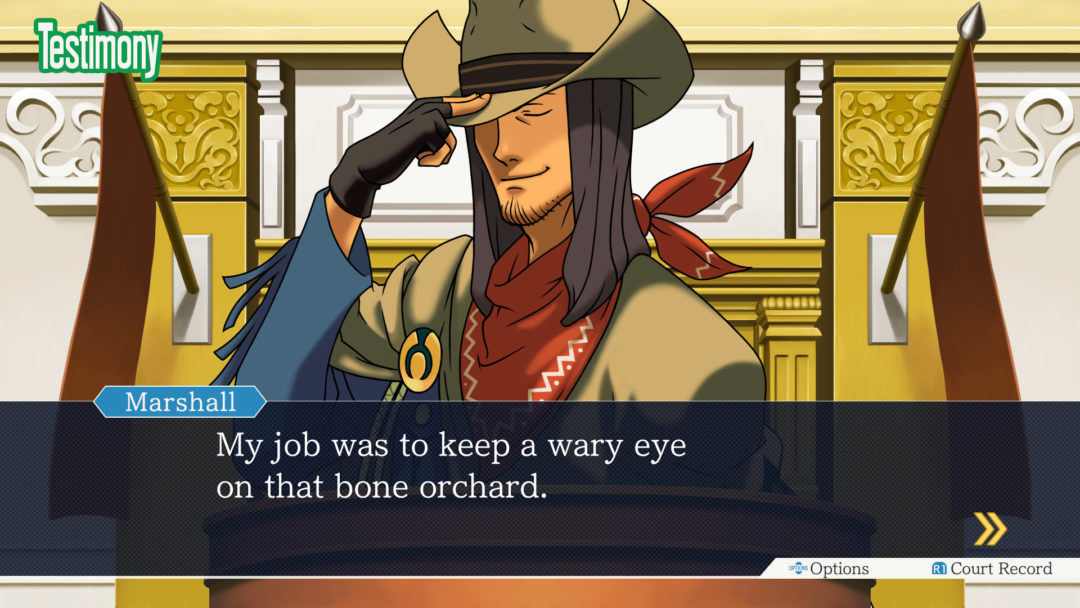 I can actually pinpoint the second I fell in love with Phoenix Wright: Ace Attorney Trilogy on the PlayStation 4. Deep into the first game, there is a moment when you are forced to cross-examine a parrot that (allegedly) was involved in a murder. That’s nuts. But that’s not what did it for me. Hilariously, murder-witnessing parrots are not unprecedented. In fact, there was a murder case just a few years ago, where a parrot was the only potential witness. Hilariously, that case took place in 2016, over 15 years after Ace Attorney was first released for Game Boy Advance. Kudos to the game’s developers for predicting such an absurd fact pattern. No, the moment I fell in love with Phoenix Wright came just after the parrot. As I was recovering from the previous absurdity, I found myself performing a surprise cross-examination of the opposing prosecutor by pulling out an old-timey metal detector from … somewhere, scanning the prosecutor, and proclaiming, with a grand gesture that he was the one that did it.

The entire scenario was so delightful, and so completely over the top, that I couldn’t help but sit back, chuckle, and applaud myself for being a complete and utter genius.

When I started Ace Attorney Trilogy, I wasn’t entirely sure what to think. Since I am a practicing attorney, it felt a little strange to finish an 8- or 9-hour workday, only to spend several additional hours on fictional cases. My feelings were vaguely reminiscent of the rock stars who were unable to play their own songs on Guitar Hero. As it happened, my skepticism disappeared pretty quickly.

The game is a cross between an attorney simulator, a choose your own adventure story, and an episode of Scooby-Doo. You play as Phoenix Wright, a rookie defense attorney with a heart of gold and everything to prove. The games play out over a series of cases dubbed “episodes,” each of which involves a murder. The gameplay is simple: read some text to learn about the murder, investigate the murder by interviewing witnesses and hunting for clues (both of which involve reading more text), and defend your client at trial by identifying contradictions in witness testimony (delivered, once again, through text) and then confront them with the evidence that undermines their assertions.

On the surface, the game doesn’t sound like it would be much fun but there are several aspects that make it rise above its rudimentary gameplay. First, and most importantly, the game’s writing is exceptionally clever. That’s absolutely essential since the visual novel game is played almost entirely through written text. The cases themselves feel like they come straight out of a Sherlock Holmes novel. Each case can stand on its own, but there is also a narrative arc that extends across cases, tying everything together with the perfect amount of charm. Each of the game’s characters has a distinct, fully developed personality that immediately comes across in your interactions with them. This is not an easy feat, considering that the games have well over two dozen characters.

Each character has a distinct appearance and unique animations that match and help define their personality. Several of the characters also have unique speech patterns. For example, one character talks really fast, so her “speech” — which is really just written text — scrolls across the screen very quickly, making it hard to keep up. The game’s music is also fantastic and helps tie everything together. There are themes for each case, for each of the main characters, and for each kind of game action (e.g., investigating or confronting a witness at trial). Almost all of them are catchy, and they do a great job of setting the mood, helping to control the pacing and keeping the game from feeling like just reading a book on a screen.

This is not to say that the Ace Attorney Trilogy is perfect.  There are several aspects of the game that are downright infuriating. The largest problem is the cumbersome process of identifying contradictions in witness testimony. The game requires you to identify a specific line of text and then confront the witness with a particular piece of evidence from a list of several possible choices. The problem is that the game lacks one-to-one mapping between evidence and incorrect statements. Sometimes, one line of the witness testimony will conflict with multiple pieces of evidence. Other times, one piece of evidence will conflict with multiple lines of testimony. The Ace Attorney Trilogy, however, is hyperlinear and will only accept one solution to each problem. This wouldn’t be a big deal, except that if you provide the wrong answer three or four times in a trial, you lose the case and have to restart from the beginning. There is no excuse for a modern game — especially a remastered edition — not to have reasonable save points.

The other problems are not quite as disruptive. The Ace Attorney Trilogy suffers from a Chekov’s gun problem with almost every piece of evidence uncovered during the investigation being used in some way at the trial. This takes away some of the game’s mystery since you can use the process of elimination to figure out which piece of evidence is relevant. The pacing can also be frustrating at times, since the game requires you to backtrack, seemingly at random, to advance the story.

As far as the platform-specific issues go, there isn’t anything to write home about. The Ace Attorney Trilogy features updated graphics, but they weren’t really lacking in the previous versions. If I were forced to choose, my preferred platform for the trilogy would probably be the Nintendo 3DS since the Phoenix Wright games would be great to play on the go.  But if you don’t have a 3DS, or if you plan to play at home, the updated graphics don’t hurt.

Phoenix Wright: Ace Attorney Trilogy is a delightful adventure worthy of your time and attention.  While the game isn’t perfect, the clever stories, charming characters, and legal theme make you feel like an unstoppable high-powered attorney. The only problem now is that I have to figure out how to win my real cases without catchy tunes, character animations, or metal detectors. It’s going to be a long day…