This freshman drama, based on a series of books by Diana Gabaldon, is off to a good start — but can it keep up the pace?

In the year 1945, Claire Randall (Caitriona Balfe) has just finished her five-year stint as a nurse on the front lines of World War II. During a second honeymoon in which she hopes to reconnect with her husband Frank, who also played a part in the war, she touches some ancient rocks and is transported to 1743, a realm without streets, iodine, or anything resembling the kind of gender equality of the 1940s. The series premiere of Outlander was a beautiful, welcoming introduction to Diana Gabaldon’s imagination. I truly enjoyed it, and I think you will too. You can catch episodes of Outlander on Starz every Saturday, Starz On-Demand, or on the Starz mobile app, though excepting the premiere, episodes won’t be available online for free. You can watch the first episode online now or catch it tonight on Starz at 9PM.

Full disclaimer: I’ve never read Diana Gabaldon’s books on which Outlander is based. Was the show good enough to want to pick the books up? Quite possibly. Let’s take a closer look into what the premiere has to offer.

The Scottish Highlands are a place of history and ghosts. Giant rocks soar over meadows and dells. Tiny towns still adhere to the pagan rituals of years past. It’s the sort of place one would expect to be transported back in time, to catch a glimpse of an actual ghost, or have lots and lots and lots of sex, just as Claire and Frank do in the first thirty minutes of tonight’s episode. In fact, I counted: In the show’s first thirty minutes, they do the nasty four times in half an hour. Remember, though, they’ve been away from each other for five years, and as Claire narrates sex is their bridge back to each other. I get it, Claire. Frank is a devilishly good looking, with those aristocratic lines all over his strong-jawed face and his natty suits.

Claire and Frank are the focus of the first half of the episode. Their relationship isn’t so much strained as it is complicated by too much truth and time spent away. They’re both smart as hell, what with Frank exploring his own genealogy (the reason they’re up in Scotland) and preparing to be a teacher, and Claire, having mastered the gruesome task of medical aid during wartime, now turning her sharp mind to the world of botany. They take interest in each other’s work, sharing their findings as the fog rolls by their stunning windows. They explore dilapidated castles together, first delighting in the history surrounding them then getting down to some serious cunilingus. They are married adults, intellectual equals, and yet there’s something distant about their emotional closeness. Perhaps they’ve seen too much or have too many questions about their time apart. Or at least, Frank does.

The show reads like Masterpiece Theater meets premium channel lack of censorship. In fact, before the two of them started gettin’ down, the show felt exactly like a Masterpiece production: exquisitely shot, subtle, and very British. Frankly, Masterpiece could use some good sex scenes.

But, let’s talk about the way Outlander is shot for a moment. Wide shots give a sense of the vastness of the Scottish Highlands. Close shots give the actors a chance to show their hidden emotions and quiet reactions. Slow motion, while always cheesy in my book, gives weight to some scenes in which could have been even cheesier, so I guess here it works. The point is, I now want to go to Scotland and find some ghosts. Also, the costuming is luscious. The fabrics are so rich and plentiful. Even the garb worn by the soldiers of yore look like vintage Alexander McQueen — there’s little in this show that isn’t gorgeous. 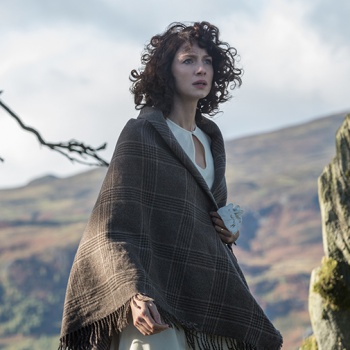 On an outing to find some blue flowers (possibly forget-me-nots) Claire heads to an ancient rock formation. She hears something strange and is compelled to touch the monolith in the middle of the formation. Boom, she’s been transported to 1743.

Claire’s a clever person, versed in the gore associated with war. She isn’t really frightened by her sudden shift, more confused. She is surprised to find no paved street and even more surprised to find a man who looks just like her husband sitting by himself in an English army uniform by a creek. It’s a very Wizard of Oz moment played for quite a dramatic effect. At first, it appears this familiar looking soldier is nice, but then because this is over two hundred years ago he tries to sexually assault her. I know it’s true to the time period, but I really wish such a strong, smart character wasn’t almost sexually assaulted by the first person she meets in her new time and land. Is that so much to ask?

She’s soon rescued by local brutes who at first joke about sexually assaulting her, but when she displays her nursing skills, they decide to take her along on their journey. Her skills (in nursing, get your mind out of the gutter) are put to good use on Jamie (Sam Heughan), the buff hero with whom it’s bleedingly obvious Claire will eventually fall in love with. The rest of the episode is of their journey to a castle, the one and same castle in which she had sex with her husband the day before.

The show has beauty going for it, and while some of the moments may read as cheesy, I sort of didn’t care. The pacing was good and the music swelled just when it was supposed to. There isn’t a moment that isn’t filled with some sort of nerdy lore or history, and in fact, the whole of Scotland, according to Outlander, would appear to be the crossroads between the past and the present, the magic and the mundane. A place shrouded in so much fog and surrounded by so much dangerous nature is ripe for this kind of reading, although I do become a little bored with the two oft used characteristics of small towns. Either they’re magical places where doorways to other realms are to be found by the wandering outsiders or they’re places of death and murder, a sinister aspect projected onto the rural stereotypes. Maybe one day there’ll be a mainstream show in which the rural aspects of a setting are bystander to stories of deeper human relationships.

And just briefly: the narration confuses me. It’s both tedious and warm at the same time. I guess I too often presume that narration is a storytelling crutch, but listening to Claire narrate the beginnings of her tale from somewhere in the future (or past) felt like a warm shower after a long day. The themes of loss, impermanence and personal identity are running rapid throughout. Nothing lasts forever — not the war, not marriages, not even limbs.

All in all, I am going to keep watching this show for Claire. As a woman unafraid to speak her mind, as a woman with equal parts carnal and scientific in terms of body awareness and education, as a self-reflecting survivor of a great trauma, I can’t help but think she’s going to kick some major ass on her new journey through the past, once she’s taught to use a sword and gets out of her wet clothes.