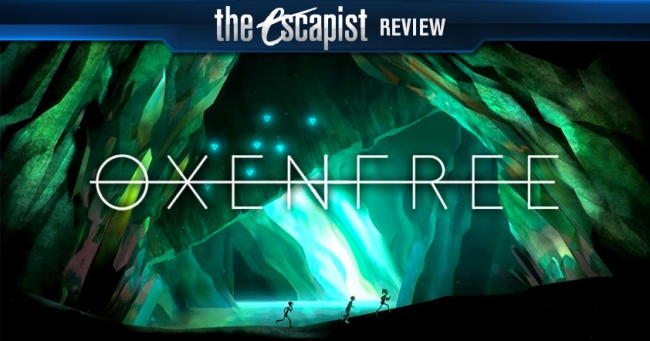 I’ve always found myself at home with creepy ghost stories, reading threads on reddit’s r/nosleep on my phone into the dark of night. Like most of Dan Simmons’ horror, the best entries are the ones that use supernatural horror as a backdrop to tell believable stories about people and their relationships. Oxenfree is one of those stories. It’s also one of those stories I don’t like to spoil because talking about it too much gives away everything it has to offer.

Oxenfree can be best described as a dialog-driven narrative game with a story that follows a group of teenagers who explore a mysterious island. At first, the five of them are just intent on chilling and exploring what Edward’s Island has to offer when something out of the ordinary happens that turns their otherwise mundane adventure into something else altogether.

You’re Alex, a teenage girl, who like all kids her age, is still learning how to get along with her peers. Right off the bat, I found myself liking her, but disliking her best friend, Ren. He talks too much and her step-brother Jonas is like the polar opposite, constantly sulking and exhibiting tremendous amounts of insecurity, but vastly more interesting in his subdued personality. When I was presented with an option to call Ren annoying to Jonas, I picked it without any hesitation. There would be consequences, of course, but I had to be honest.

It was interesting to gather bite-sized details about Alex through her conversations with Jonas and Ren, learning about each of the characters as I went. The dialog wasn’t always the most believable, but the way they interacted with each other seemed pretty real to me. In addition to the main story, there are a series of letters that you can collect, which tell a story-within-a-story. It’s extra stuff, but it lends a lot of depth to Edwards Island.

There are choices to be made as you travel throughout the island, based on what you say and who you say them to. Either way, you’ll always end up hurting someone, but that’s kind of like how life is and the game does well to dispel the illusion of being a game by being grounded in a reality with no real “win state.” It has supernatural trappings, but who’s to say it’s wrong to believe in ghosts?

If you don’t know to expect a supernatural horror story, Oxenfree can seem a little slow at first. Some characters (especially Ren) inundate you with a lot of seemingly pointless information about people you’ve never heard of, and things that, on the face of it, don’t matter. You’d be wrong to think that they don’t matter, of course. Every little detail you learn provides some seams to the tapestry of the island’s history and the people you’re with.

So, without spoiling too much, weird things start to happen when you play around with the radio you have with you. At first, the radio only provides you with details about some of the island’s landmarks, but things take a turn for the weird a short ways in. It’s almost peripheral, of course, to the characters and how you choose to react to the situations Alex and her friends find themselves in–which isn’t to say that it’s uninteresting. On the contrary, the story of the island and Alex’s personal journey are completely intertwined. Oxenfree‘s story is not only cohesive, but also compelling. It’s also one you might want to play more than once, if only to find out how you could’ve said different things and changed how others thought of Alex.

Bottom Line: Oxenfree is a story about human interaction and how we choose to treat each other, all set against a backdrop of supernatural horror. It just feels really human in spite of all the weird stuff.