Pac-Man Ghostly Adventures for the young, Pac-Man CE DX+ for the hardcore, Pac-Man: Battle Royale for everybody. 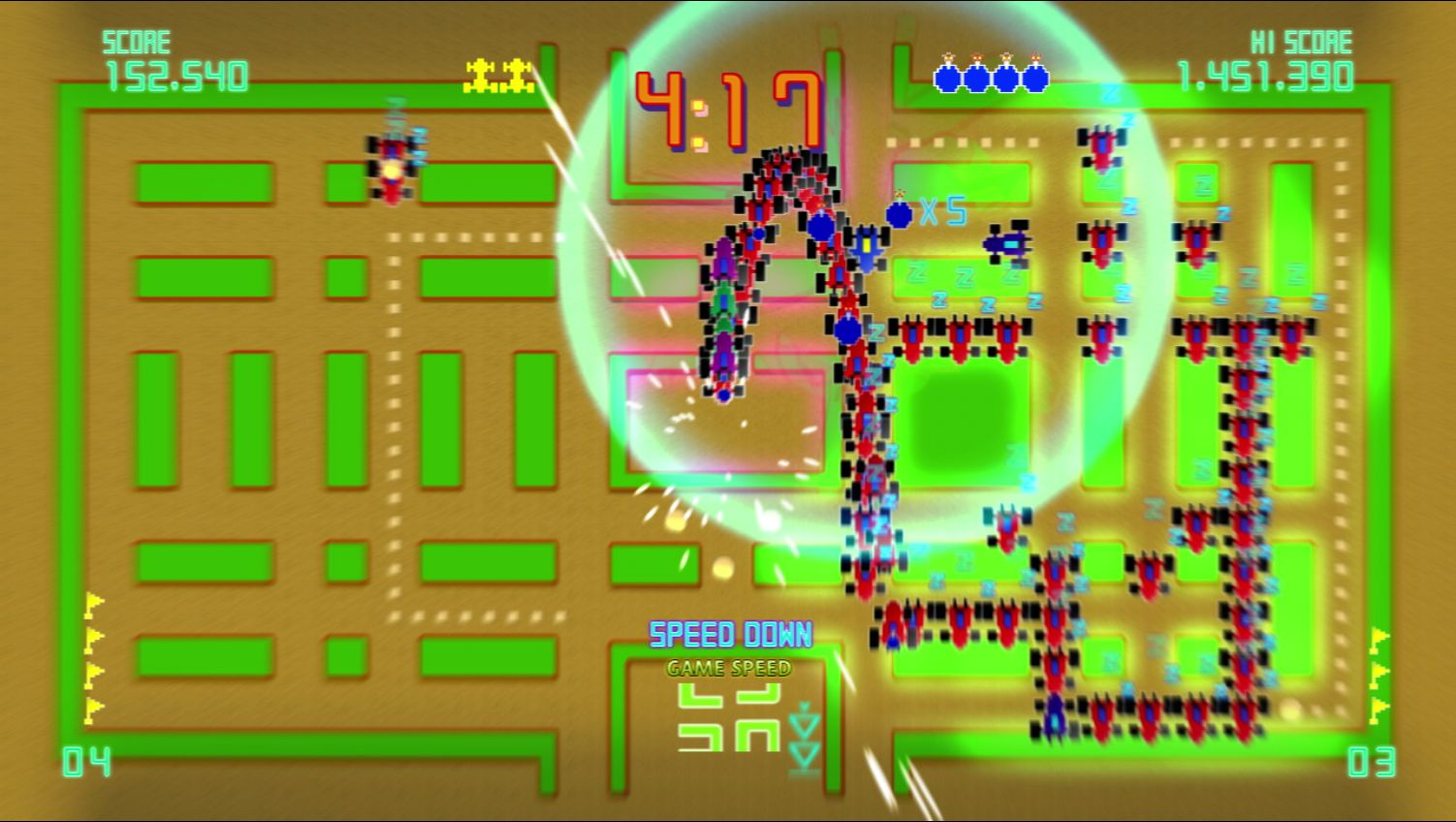 First among the three games is the TV show tie-in, Pac-Man and the Ghostly Adventures. The Disney show features a young Pac-Man defending a modern city from evil ghosts that threaten all Pac-citizens. Because it’s your average Saturday morning cartoon (Sonic the Hedgehog had one of those!), this console title skews a little younger with very straightforward platforming and 3D adventure gameplay. After viewing both the trailer and the game side-by-side, it’d be hard to mistake Ghostly Adventures for anything other than what it is: a TV tie-in. Expect lots of tie-in toys, too.

In Ghost Adventures, players control the young Pac-Man, navigating him through the city to save his neighbors from attacking ghosts. The world is littered with things for Pac-Man to eat for points and health — standard food items and pac-dots — and also with special power-up pac-dots that give him special powers. In the demo level shown to journalists and up for hands-on time at Namco Bandai’s E3 meeting room was a Park Panic level where players could transform into a frog-looking Pac-Man with an extendable tongue that both captured ghosts for Pac-Man to eat and allowed him to attach to parts of the level to reach new platforms. Interestingly, Pac-Man can attack ghosts at any time — or use a special attack to turn them blue (and cause them to flee) and eat them the more traditional way.

Ghostly Adventures is also available for 3DS, but the audience for that game is intended to be younger still — meaning that it’s a side-scrolling platformer instead of a 3D action platformer. That version of the game was not shown in action at the E3 presentation.

Next up is Pac-Man CE DX+, which should be read as “Pac-Man Championship Edition DX (no idea what that stands for) Plus (because there’s more stuff).” This game is both an update to 2010’s original Pac-Man CE DX and a completely new suite of content featuring fan service for classic arcade game fans. For those of you that missed out on the 2010 XBLA surprise hit, CE DX allows players to play traditional Pac-Man at a much faster rate with even more ghosts that are triggered by proximity. Players navigate the map at speed, alerting more and more ghosts to Pac-Man’s presence and eventually building up a giant tail of pursuing ghosts to form a “ghost train” that can be consumed en-masse when Pac-Man hits a power pellet.

The full Plus edition keeps this fast-and-furious gameplay, adds new social features like friend rankings and medals or achievements, and also introduces all-new maps to the experience. Most of the maps are fresh layouts on the traditional game; a few, however, are reskinned maps done in the style (and with the music) of classic games like Dig Dug and Rally X. A sure crowd-pleaser for the retro set. Those that already own CE DX will get a tiny taste of this with an update that adds the leaderboards, the non-reskin maps, and the medals/achievements. Unlocking all the medals and achievements will win the player ONE of the reskin maps – but these players can get them all as downloadable content.
Last was the game that wasn’t available in the Namco Bandai booth (but will be on the show floor during day 2 of E3): Pac-Man: Battle Royale. This is a 4-player arcade game that previously existed only in Japan as a cabinet game. Players each control a color-coded Pac-Man and race around the map, trying to eat first all the ghosts – and then each other. Last Pac-Man alive wins. I can personally vouch for the fun in this game, having played an imported arcade cabinet at web games service Kongregate’s San Francisco headquarters, where the execs make it a ritual to play the game after every business meeting.

By far the best part of the Pac-Man preview showcase was Pac-Man producer himself, Kunito Komori, who greeted press while waving around a Minecraft sword he bought at Hot Topic. Komori, the developer behind Battle Royale, is the kind of man that exudes enthusiasm for the franchise even after repeating the same demo speech more than 20 times. He also plays Minecraft. And makes it a point to keep Pac-Man simple, which is the everlasting appeal of the franchise, regardless of the form it takes.