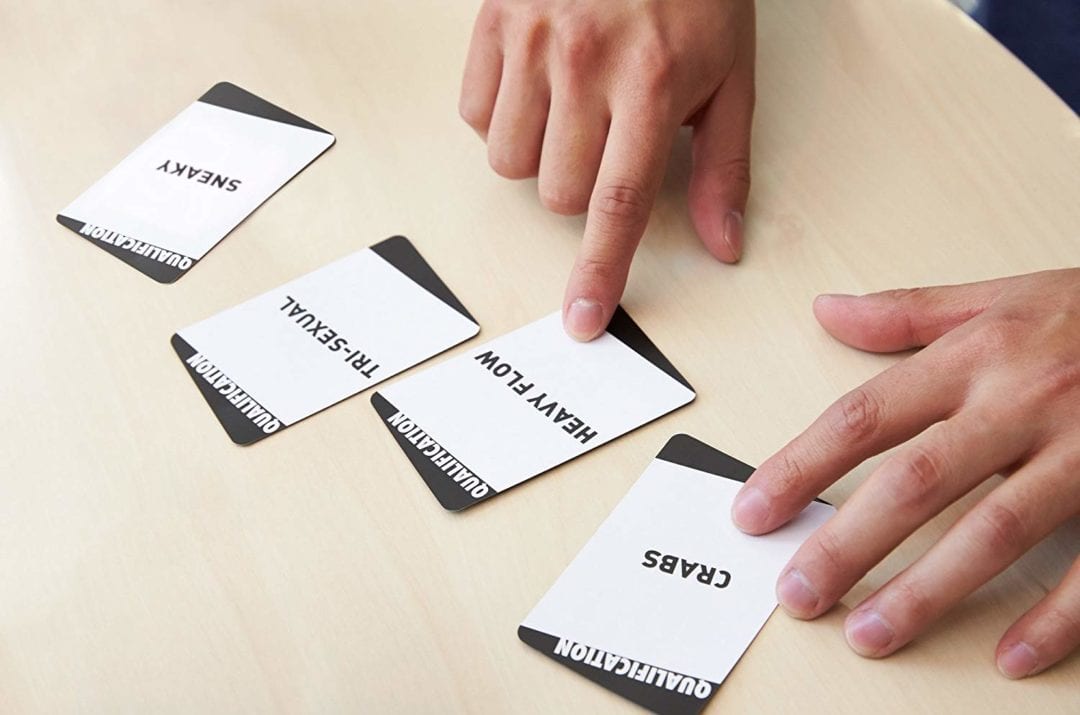 The holidays means spending a lot of time with family you don’t see often or see too often. That can be a recipe for awkward social interactions or good, old-fashioned boredom. Playing party games can be a solution to both, and luckily there’s a wide spectrum to choose from based on how much engagement you think you can wrangle out of the players.

Cards Against Humanity’s huge success means it’s had an equally large number of imitators. Of the three games I tried for this story, Endless Games’ HashtagIt hews closest to that mold. Each round, players must entertain the judge by assigning the best hashtag to an image flipped from the central picture deck. I would love to know how these pictures were selected because they are a bizarre mix ranging from overtly sexual like a woman licking a muscular man’s torso, to somewhat serious like a guy standing next to a wrecked car with his head in his hands, to downright odd like a bunch of people sneaking around in fruit and vegetable costumes.

Players have a hand of seven hashtags to choose from and while there are plenty that can be used creatively — I won a round by applying #LetsEatOut to a shot of a couple seemingly showing off their flexibility in bed — too many of them are generic like #EpicFail and #Cute. One of my friends implemented a policy where she’d periodically purge her hand for the “good of the playtest” and I really do think the game could use some built in method to get rid of dud cards besides just dumping them on rounds you don’t think you’ll win. The pictures add some novelty to the Cards Against Humanity formula, and the simple hashtags keeps the game from getting too gratuitously offensive. It’s a good solution for groups that are looking for something a little different, but don’t want to stretch too much.

Galactic Sneeze’s Schmovie deviates from that mold significantly by both being clean and requiring significantly more creativity. Each round, one player serves as the producer and comes up with the genre of a film they’d like to see made by rolling a die representing sci-fi, horror, drama, romantic comedy, action or producer’s choice, which could be anything from documentary to musical. They then choose the movie’s subject by flipping over the top cards from two decks, and the other players have to come up with the best title for the film.

Puns and references to existing movies are encouraged, but you have to know your audience. I was convinced I couldn’t be beaten when I suggested Lemon Lucky for the name of an action movie about the world’s luckiest fruit, but it turned out the round’s producer hadn’t seen Logan Lucky so didn’t get the joke. I made up for it later with The Goatfather as the title for a gangster film about a substitute farm animal. That spurred some debate about the title’s merits, since it didn’t really recognize the substitute part of the film subject, but I would hold that film titles are often pretty vague. Also the rules explicitly state you don’t have to integrate every element in the title. These are the arguments you will have if you play with film buffs.

The game requires just enough thought that someone’s going to take too long agonizing about their title. Schmovie combats procrastination by actually encouraging you to heckle stragglers until they write something down. It also has the potential to get people working from the same touchstones to come up with nearly identical movie titles like The Shining 2: Double Trouble and Scanners 2: Double Trouble for a horror film about psychic twins, so it can sometimes be better to make more out-there suggestions just to stand out. The one significant downside to the game is the tiny whiteboards used to write down your film suggestions. They’re prone to smudging when shuffled, which can erase parts of the film name. After enough rounds it becomes easy to identify each player’s handwriting, which isn’t really an issue. If you’re trying to cheat on a friend’s behalf when playing a party game you’re doing something very wrong. But it does unfortunately remove the enjoyable secondary game of watching people try to be coy when their suggestions are read aloud. The prop’s shortcoming is made up for by the adorable trophies doled out to the winner of each round, which each show a costumed squid (actually a movie-loving Schquid according to the game makers) representing different films or genres like superheroes, pirates or sports stars.

Mattel’s Funemployed requires even more creativity, which can be rewarding or exhausting depending on your group. Geared towards ages 16 and older, the game casts one player each round as the interviewer for a job ranging from conventional careers like personal trainer or plumber to decidedly odder ones like pirate or supervillain. The other players must apply for the job by building a resume from four cards representing dubious qualifications like X-ray Vision and Russian Accent. There are 10 cards face up in the middle that players can grab, swapping them with cards in their hand to better put together a coherent narrative for why they deserve the job. Then when everyone’s as satisfied with their hands as they can be, they take turns making their case.

Because the cards are weird and vague, players can get into character and come up with creative reasons why they’re assets. For instance, one guy claimed the Shooting Blanks card meant he didn’t have any distracting kids to take him away from the job. Another said her Survival Skills card would give her the ability to live off whatever she could scavenge from the office and never leave. One of the cards shuffled into each deck reads “My Job,” representing the actual job of whoever’s turn it is to be interviewer. This both acts as the final round of the game — with victory going to whoever’s won the most at that point — and provides a fun opportunity for someone at the table to vent and possibly accept some ribbing about what other people think their job entails. Hopefully it doesn’t get too harsh as the goal of these games is to make the holidays go smoother rather than prompting a fight at the end of the night.