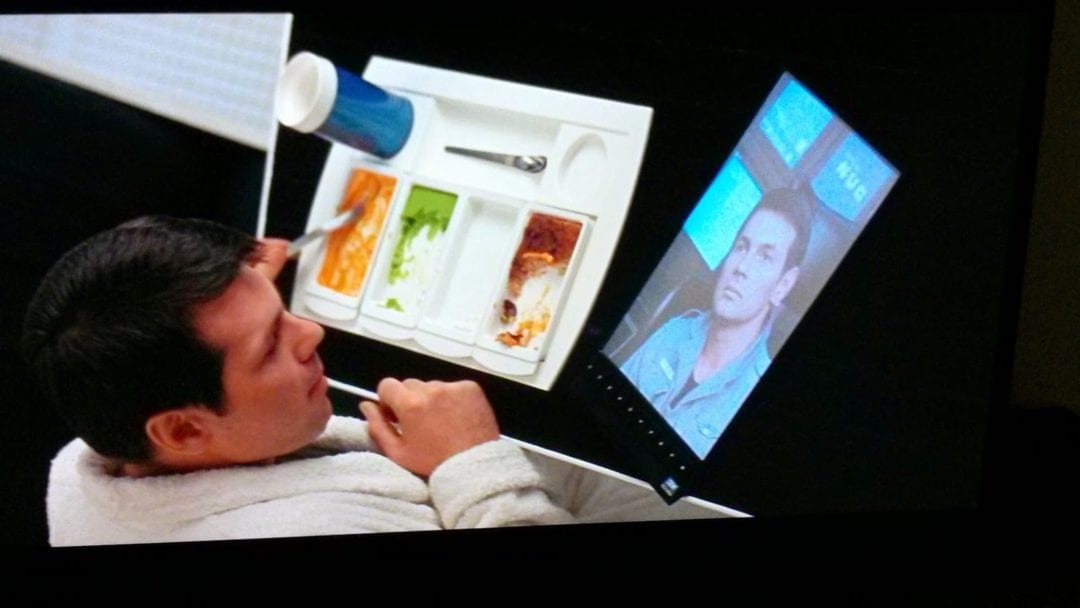 So it is with science fiction and patents. Patents are supposed to encourage innovation by granting inventors a limited monopoly over their inventions. But what happens when a fictional invention beats an inventor to the punch? The world of science fiction is one of imagination, and from time to time the forward-thinking creators of sci-fi works predict the future or, in some circumstances, inspire the future. The PADD from Star Trek looks and functions a lot like the iPad of 2010, the house from Back to the Future Part II shares many features with today’s smart houses, Mrs. Weasley’s creepy family-tracking clock inspired a creepy real-life clock that does the same thing, and so on. If each of these real-life inventions was preceded by a fictional equivalent, should we still award the real-world inventor a patent for his “creation”?

The answer is more complicated than you’d think. It should go without saying that the mere depiction of an invention in a sci-fi or fantasy story doesn’t tell us much information about how that invention would work in the real world, or even if the invention would work in the real world. Indeed, the list of successful science fiction inventions is much smaller than the list of the failures. Behind every replicator (read: 3D printer) stands dozens of technologies that we have yet to crack — teleporters, lightsabers, Stargates, and so on. Like stopped clocks, science fiction stories can contain glimmers of insight, but those glimmers are rare, and there is no obvious way to separate the inventions that will work from the rest of the dreck.

Fortunately, patent law provides a few tools we can use to get to the bottom of this problem. For the purposes of this discussion, we can group patents into two categories: design patents and utility patents. Whether a sci-fi invention will defeat a future patent depends on the category of invention.

Design patents are relatively easy to understand and evaluate. Design patents protect non-functional, aesthetic aspects of a design. An inventor seeking to obtain a design patent must be able to show that the proposed design is new and original. The fact that patented designs cannot be tied to function means that designs exist apart from any associated technology. This means that designs depicted or described in science fiction and fantasy stories can easily preclude a future design patent, even if the enabling technology does not or cannot exist.

In fact, this almost happened.

In 2011, Apple argued that Samsung Galaxy phones and tablets infringed on several of Apple’s design patents. In its defense, Samsung attempted to invalidate Apple’s patents by showing that their patented design was identical to one shown in Stanley Kubrick’s 2001: A Space Odyssey. While the court ultimately rejected that argument, it did so on procedural grounds, and did not reject the use of science fiction evidence as an invalidating reference. Because design patents are purely aesthetic, the depiction of a design — even if attached to a yet-unmade device — can and should preclude a designer from ever patenting that design.

Utility patents are more difficult. These patents cover methods, machines, manufactured items, and compositions of matter (like a drug or a chemical formula). An invention can only be patented if it is new, useful, and non-obvious. For the purposes of this discussion, we can set aside the usefulness requirement, since the usefulness of an invention will not change based on its depiction in a science fiction story. The “newness” requirement is not as easy to dispense with. When evaluating whether an invention is new or novel, courts and patent agents consider whether each and every aspect of the invention has been implemented or described on some prior occasion. For the most part, the science fiction inventions we are concerned with have been depicted, but were never actually used or implemented in their respective stories. Similarly, the stories do not provide sufficient information to allow the inventions to be used or replicated. To state an obvious example, Captain Kirk never actually transported and, despite the techno-talk to the contrary, Star Trek did not provide instructions that would allow someone to build an actual transporter.

As a general matter, this means that most sci-fi inventions would not prevent a future invention from satisfying the patent office’s “newness” requirement. That conclusion, however, comes with a fairly sizable caveat.

I am not claiming that a story can never fully disclose an invention.  It is just that, in order to do so, the story must disclose enough information so that the invention can be replicated. A relatively-well known story among patent lawyers involves a patent that was defeated by a Donald Duck comic. In the comic, Donald Duck wanted to raise a sinking ship.  He came up with a brilliant idea — if he filled the ship with ping pong balls, he would change the density of the ship, which would cause it to float.

Believe it or not, a Danish inventor later attempted to patent that exact method, only to find that the Duck had beaten him to the punch. While this doesn’t move the meter much for sci-fi depictions of seemingly impossible technologies like Star Trek’s warp drive or Honey, I Shrunk the Kids‘ shrink ray, it does mean that clever depictions of plain-old Newtonian physics could very well preclude a future patent. In other words, one should think deeply before filing a patent disclosing “a method for capturing a roadrunner or other wildlife by painting a photorealistic background onto the face of a cliff.”

Our final consideration relates to the requirement that a patented invention be “nonobvious.”  While there are a lot of ways for an invention to qualify as “obvious,” the one that most directly implicates sci-fi inventions is a consideration of whether the proposed invention is a straight-forward, intuitive, or obvious application of a known technology with predictable results.  When it comes to that inquiry, a sci-fi or fantasy story’s depiction of technology could prevent a future inventor from obtaining a patent by changing society’s collective understanding of what constitutes a “straight-forward, intuitive, or obvious” application.

As an example, consider Mrs. Weasley’s family-tracking clock. That clock was introduced in Harry Potter and the Goblet of Fire in 2000. While GPS technology had existed in some form since 1959, the technology wasn’t available for mass consumer use until just after Goblet was released. So even though J. K. Rowling didn’t pioneer GPS “magic,” her story — which has reached tens of millions of people — influenced the way we think about the technology and the ways we expect that technology to be used. Those expectations, in turn, could make it difficult, if not impossible, for a GPS-clock inventor to satisfy patent law’s nonobviousness requirement.

Other sci-fi technologies could follow a similar pattern. While sci-fi stories may not tell us how their cool inventions work, they can expand our imaginations and help us decide how those technologies can be used once they are developed and, in doing so, could render those applications obvious.

That’s the takeaway from this whole analysis. The creators of science fiction and fantasy stories don’t change the world by making new inventions, but rather by inspiring new inventors. Interviews with today’s top scientists, inventors, and innovators show that their curiosity and passion were sparked by stories of wonder, fantasy, and imagination. Fictional inventions can block real-world patents, but limiting the inquiry to those stories misses the bigger picture.  A stopped clock is wrong most of the time, but if it inspires the next great clock-maker, it might just be the stopped clock that puts the world in sync.