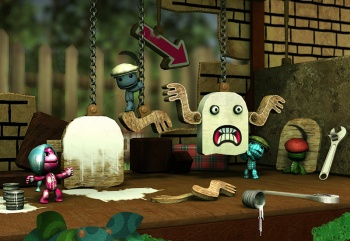 Sure, StarCraft 2 was great, but it’s StarCraft. I expected that. These five games came out of nowhere (well, most of them) and ended up being some very pleasant surprises. Some had some fantastic ideas, some were just charming, some were just plain neat … or any combination thereof.

Now, LittleBigPlanet has certainly gotten its share of press coverage, though I have to admit I didn’t pay it much mind given that for a very long time I had absolutely no plans to own a PS3. Sure, it was doing some cool things, but I just couldn’t bring myself to really care.

Having seen a level – albeit a basic, rudimentary one – created before my eyes, and getting a chance to play it through moments later? Well, I now fully understand why Escapist Section Editor Susan Arendt wants a Sackboy of her own so badly. The entire thing just put a smile on my face, the platforming was simple but intuitive, and the physics work incredibly well (much fun was had with rocket cars even after the “race” was over). I’m not ready to drink the Kool-Aid just yet, but if there was a game that might lean me towards plunking down the cash for a PS3, LittleBigPlanet is it.

While I’m not what you’d call a fan of sports games, I’ve always had a bizarre soft spot for snowboarding titles. While I never really had a chance to get my own hands on the game, Destineer’s Stoked has some very nifty ideas under the hood. Instead of just rendering individual mountain faces or particularly well-known runs, the Stoked developers opted instead to just simply build, well, the whole mountain. At first, players will have to unlock different locations for the helicopter to drop them off, but once they’ve achieved a certain level of fame, they’ll be able to fly the helicopter themselves, starting their run from anywhere they damn well please.

Another nifty idea behind Stoked is the idea of real-time, dynamic weather: the demo actually crashed during my look at the game, but that turned out to be a hidden blessing – the reset took the game back two days (in real-time), and when we started back up there was much more exposed rock on Mt. Fuji, because the fresh snow hadn’t yet fallen. Precipitation, temperature, and wind will all affect the landscape over time, meaning your runs down the mountain might not be the same.

Sure, I’ve got a fondness for snowboarding games, but the six beautifully rendered mountains in the game combined with a robust and relatively original weather system make it hard for me to not be excited about Stoked.

I’d read up a bit on Twin Skies in preparation for my appointment at the Meteor booth, but was admittedly still unsure as to just what the game was all about – and even now, I find myself at a loss of words to try and explain it, because it’s really the sort of game you need to see to understand. Many of the team at Meteor had been the creative force behind the relentlessly addictive Neopets, and this experience shows: while the actual MMORPG portion of Twin Skies isn’t anything particularly special, the degree to which it interacts with the website community and the Flash games (think, uh, Neopets) is mindboggling.

At the Twin Skies booth, two monitors displayed the exact same scene, albeit in different formats: waves of imps marched towards a warrior, a caster, and a gunman in both a basic, cartoony, 3D MMORPG, and a 2D Flash game. The two were synced together perfectly, and pressing a button in the Flash version to have the wizard cast a powerful spell resulted in his MMO counterpart doing the exact same thing. I’d had a prior appointment to meet with the team, yes, but there were plenty of con-goers crowding the booth drawn only by this bizarre display of cross-platform synchronization.

Twin Skies is meant to be a casual MMO and won’t have hardcore raiding or anything of the sort. What it does have is interactivity with things outside the main game on an unprecedented scope. An example the team gave me was the Junkworm: one of the Flash minigames planned is Junkworm, a traditional Snake clone where your worm eats trash and gets longer and longer until it collides with something. If a player gets a particularly high score in the browser game, though, it will actually spawn a Junkworm monster in the MMO world with a loot table that will include some of the things that the creature ate to grow in length. With a high enough score, the Junkworm will be stronger than average, and if their creations happens to kill a character, the player who originally created it might get some sort of achievement or award.

Imagine being given a quest to help a character do laundry – which you then accomplish by heading on over to the website and completing a browser minigame. The quest reward – in the MMO – is a special scrubbing brush, and from then on you’ll be able to use that scrub brush whenever you play the Flash game. Much of the core of Twin Skies entails letting players interact with the game – managing their auctions, talking to their guild – from external sources like the website. A comparison was drawn to the World of Warcraft Armory, where players can view characters’ equipment and stats outside of the game. With the Twin Skies philosophy, a player could go onto the Armory and actually change what their character had equipped without ever entering the game itself.

While the game itself won’t be a blockbuster like Warhammer or EVE, and I have no idea how well these ideas will hold up in practice, these ideas and concepts alone are ambitious and creative enough to warrant praise, and praise I shall gladly give. I might not have known what to expect from Twin Skies beforehand, but Meteor is trying some awesome things and I’m going to keep my fingers crossed for them.

Also, the baby Salabounder plushes they were handing out are goddamn adorable.

I’ve already lavished praise and acclaim on this Ancient Greek-themed action RPG, so I’ll refrain from repeating myself here. I will repeat myself when I say that Argonauts showed incredible promise on the show floor. The game has a robust and fairly original advancement system behind a solid combat engine that retains the entertainment and pure ass-kicking joy of God of War, though at a (relatively) slower, more tactical and realistic pace.

I loved the “action” part, but was impressed by what I was shown of the “RPG” half as well – the player will have to make choices on the fly, each with different outcomes. For example, in one boss fight the foe will be holding a statue of her former self, and at some point will become enraged and drop it. Players can either judge her as undeserving of redemption and kill her directly, or attempt to destroy the statue and redeem her. While there’s no way to really tell before we see the finished product, Rise of the Argonauts stood out among the show floor as one of its unexpected best.

1.) The Lord of the Rings Online: Mines of Moria (Turbine, PC)

All right, yes, this is an expansion, so some might say it doesn’t count. LotRO is a solid title with a devoted fanbase and a development team whose passion and love for the original source material is blindingly evident in the work they do. I already knew this, and in that respect the game shouldn’t count as a surprise.

Moria, though? That was a surprise. I’m not talking about the two new classes, as intriguing as they appear – the star of the show is the kingdom beneath the mountain. LotRO is by no means the only MMORPG based off a pre-existing IP, but while games based on Warhammer, Star Trek, and the rest have their own trials and tribulations … this is Tolkien. This is the grandfather of modern-day high fantasy. Growing up, I had a friend whose cousin was named Arwen: if Turbine messed up the Mines of Moria, they’d never hear the end of it.

So it’s a good thing that they didn’t.

In all seriousness, Turbine has built Moria. They’ve built it, and it is immense (as it should be). They’ve replicated what we see in the books down to details like the correct number of steps in a grand staircase. An area of the kingdom of Moria built during an era of friendship with the Elves shows traces of Elven architecture. They’ve filled in some of the blanks, too, such as an area called the Waterworks where massive paddlewheels and underground rivers provide the groundwork for the civilization of Moria to exist.

At this point, I’m beginning to suspect that Turbine may be actually employing members of the line of Balin, because what they’ve done is no small feat. Moria is a high bar to clear, and they’ve done so with flying colors.

Tolkien should be proud.