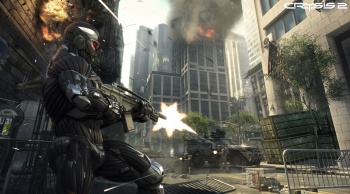 At first glance, Crysis 2‘s multiplayer feels like its influences begin and end with Call of Duty. It’s still unmistakably grounded firmly in Crysis, but the frenetic high-speed gunplay with iron-sighted firefights decided in mere seconds is more than a little reminiscent of the style of play popularized (if not invented) by games like Modern Warfare. It requires a very similar skillset to succeed: How quick (and accurate) are your twitch reflexes? How well can you aim down a fixed sight? How well can you pick out an enemy soldier from a cluttered environment?

Judging by my performance, not as well as some people can.

Of course, it’s still Crysis. The franchise’s sci-fi trappings lend it a slightly different tone from its modern-day counterparts like Call of Duty and Medal of Honor. Every soldier comes equipped with their own feature-packed nanosuit, and all the powers that entails. Don’t want to run up those stairs like you usually do, because there’s a camper at the top? Take a running leap and grab the edge of the platform and pull yourself up before shotgunning him in the face.

You can turn invisible at will (though there’s a small delay when decloaking before you can fire – otherwise the team found that the stealth/shotgun combination reigned surpreme), or you can give yourself a boost of extra armor, both of which drain a quickly-refilling energy meter that is also used for boost jumping or super-sprinting. In other words, it’s a tradeoff: Jump-grab too many times, and you might not have the energy to spare on shielding in a firefight.

Crysis 2 also offers an engaging new twist on the now-common “Kill Streak” mechanic. Rather than just automatically awarding benefits when you kill a number of enemies in a row, Crysis 2‘s enemy players will drop their dog tags when killed in a skillful manner – like a headshot, a melee sneak attack, or a revenge kill (to name a few). Players must physically collect the dog tags from fallen foes, meaning that a sniper can’t just sit in the back all day racking up a massive killstreak bonus. To compensate, they persist through death, so you can either use the low-level reward (displaying the location of all enemies on a minimap) as often as you get it, or you can save up for more powerful boosts like an alien support gunship without worrying that you’ll get killed sprinting from your hiding spot to pick up the dog tag you needed.

It’s actually a very satisfying mechanic – newbie players can still earn bonuses without having to get kills in a row, and even the lowest-level bonus is still useful to the team as a whole. In other words, it makes it easy to feel like you’re contributing to your team’s success even if you personally aren’t racking up the kills. And if you aren’t a practiced hand at modern FPS titles, you probably won’t be racking up the kills. 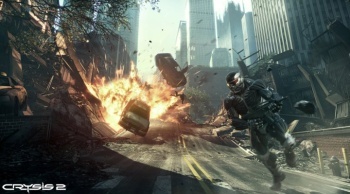 The game’s classes, too, resemble the popular “layout” system used in games like Call of Duty. You’ll be able to choose what weapons you bring with you, as well as unlocked Modules that are essentially Perks. This one removes the “shimmer” effect from your stealth, that one lets you do a cool stomp-down attack from midair, and this other one gives your acrobatic running, leaping and climbing a bit more speed. We were told that the classes were more than just layouts, and would actually have differences (such as increased armor on the Demolitions class) that would become more apparent as they leveled up. However, given that all of the classes were the equivalent of scrawny first-level newbies at this event, there didn’t seem to be much of an appreciable difference at all.

The Crysis name comes with more expectations than just sci-fi elements, of course. It should go without saying that Crysis 2 looks phenomenal, even on consoles (we played it on the Xbox 360). Both of the maps that were available at the event – a territory control-esque map set in a rooftop garden, and a deathmatch in a bombed-out apartment complex – were actually fairly small and well-suited for a match of 6-on-6. What was impressive was how much it felt like the map was part of a much larger whole, particularly on the rooftop map – where you could look all around you and see a destroyed, bombed-out New York City. Helicopters fly by, smoke wafts from distant buildings; the game does a great job at making the backdrops feel alive (and making the areas feel bigger than they are).

Of course, the Crysis graphics combined with the visual noise of an urban environment results in a game that is very visually busy, and it’s easy to lose track of what’s going on in a firefight if you aren’t a veteran. It’s by no means impossible if you’re playing it on an HDTV, though it isn’t hard to imagine that gamers still using SDTVs might have trouble identifying everything on-screen in a timely fashion. In fact, it isn’t a stretch to imagine that anyone playing on a SDTV is going to have a lot of trouble playing the game at any level where they’re likely to be challenged.

Perhaps that’s just the tradeoff for looking great. While the demo felt rough at points (some of the animations in particular were immersion-shatteringly jerky, in particular) Crysis 2 does look stunning. In fact, at one point I found myself admiring how the scenery reflected off of one of the glass panels of a greenhouse.

And then I was promptly gunned down. I guess Crysis 2 doesn’t offer much time for players to stop and smell the roses.