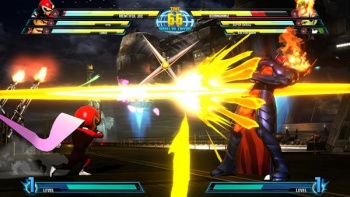 Marvel vs. Capcom 3 is the first kind of fighting game.

That’s not to say that the way to succeed at Marvel 3 is purely through thwomping away on those buttons like a ferret on speed. No, as any fighting game diehard knows, an experienced kung-fu master will crush a kung-fu masher nine times out of ten. That is to say that you can mash away at Marvel 3 and do some really cool stuff – the sort of stuff that makes you say, “I don’t know what I just did, but that was friggin’ awesome!”

Much of this has to do with the streamlining of the system. You have three attacks of varying strength, you have a button that launches your opponent into the air, and you have buttons that call in your two teammates, either to permanently swap out or to just come in for a quick assist attack. If it sounds like Marvel, it should. But everything feels slicker and simpler to pick up; it feels easier to chain attacks into each other for cool combos without having to memorize what leads into what.

It doesn’t hurt that the game looks fantastic, either. When my exposure to Marvel 3 had been limited to just screens and video, I hadn’t been sold on the graphics – it looked nice, sure, but it seemed jerky and disconnected, as if moves didn’t lead into one another. That may still be the case, but if they haven’t improved the game’s visual flow you certainly don’t notice it when the screen is being filled with projectiles.

As with all fighting games, especially one as crazy as Marvel 3, people will someday have it down to a science. There will be tier lists, there will be infinite combo loops, there will be glitches that make it into tournament play as legitimate strategy. For now, though, Marvel 3 is incredibly fun to just pick up and play, even if you’re just mashing the buttons away without any knowledge of what’s happening on screen beyond “that guy is mine.”

Now if only they’d have had playable Amaterasu here at PAX. Then it would have been pretty much perfect.