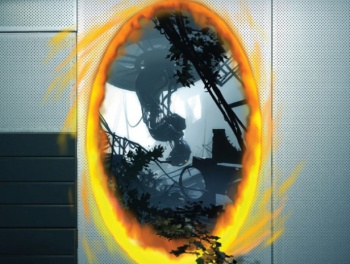 Despite being designed as a single-player experience, Portal was, more often than not, played cooperatively, as players handed over controllers to pals on the couch or simply took direction from friends and relatives looking over their shoulders. It’s nearly impossible to watch Portal without chiming in about the best way to get through a room or suggesting a new way to wreck those adorable little turrets. Portal 2 recognizes the game’s inherently co-operative nature and formalizes it by crafting puzzles that can only be overcome by two active players working together.

For Portal 2‘s two-player portions, you’ll take on the role of either the blue or orange robot enlisted in the Cooperative Testing Initiative. Each robot is equipped with its own portal gun, but you’ll have to work together and combine their portals in just the right way if you hope to escape the room and move on. The demo was hands-off and quite short, but one example we saw was Orange jumping into an infinite fall – one portal positioned over the other – to gain momentum, then Blue shooting a new exit portal at exactly the right moment to use that momentum to fling Orange across the room.

Conceptually, that’s pretty simple, but it’s easy to see how Portal 2 is going to require a lot of communication between players. Telling your partner exactly where to place a portal can prove difficult in a room with few distinct features (“Near the white thing.” “It’s all white!”), so players will be able to use a Ping tool to paint a spot on the wall exactly where they need their pal to put a portal. Even precise communication won’t prevent players from dying at their partners’ hands over and over again, but the robots come equipped with a variety of solo and co-op gestures to help diffuse tension. Nothing lowers stress faster than a good robot hug. Awwwwww.

Portal 2‘s co-op has a few other new tricks, like reflector cubes that can redirect laser beams, and light bridges that can be manipulated with some well-placed portals. It also, naturally, has GlaDOS, who will do her best to drive a wedge between you and your buddy with comments like, “This is isn’t a competition, but if it was, Orange would be winning.” Don’t ever change, GlaDOS.