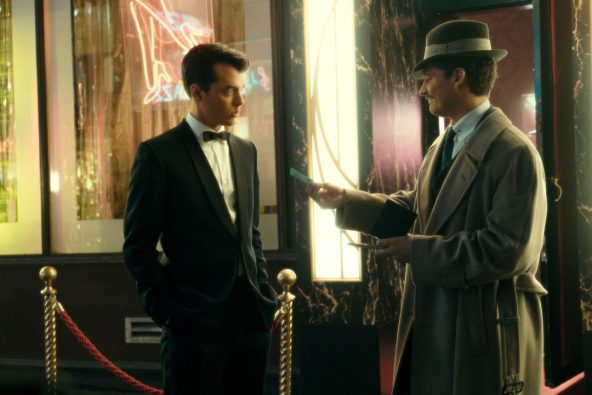 The Battlestar Galactica prequel Caprica originally started as an entirely independent show about artificial intelligence, but it was tied into the mythology of the Sci-Fi Channel’s hit series to ensure an established audience. Pennyworth, a Batman prequel following the adventures of the Wayne family’s loyal butler Alfred Pennyworth before he moved to Wayne Manor, feels like it could have been developed through the same process. It’s an entertaining British spy thriller that basically has nothing to do with Batman except the names.

Set in 1960s London, the show follows a 26-year-old Alfred (Jack Bannon) who’s returned from a 10-year tour primarily in India as a member of the Special Air Service, a special forces unit within the British army. Like many of his fellow soldiers, he’s had a tough time readjusting to civilian life and is plagued by nightmares. His goal is to give up on his violent past and start his own security firm, though currently he’s making do working as a club bouncer.

Of course absolutely nothing goes according to plan. Alfred helps defuse a situation at the club involving Batman’s future father, Thomas Wayne, and a simple exchanging of business cards leads to Alfred getting embroiled in a shadow war between dueling secret societies. As the unnamed Prime Minister (Richard Clothier) explains in a scene reminiscent of Game of Thrones’ famous sexposition, London is home to both the fascist Raven Society and the socialist No-Name League, and the government is just trying to keep everyone from getting out of line.

Thomas has come to England investigating a major case of financial fraud on behalf of his company, which may or may not be the CIA. He’s targeted for assassination by the Raven Society, and when that effort fails, Alfred’s card offers another potential venue. The Raven Society decides to kidnap Alfred’s dancer/actress girlfriend Esme (Emma Corrin) and propose a hostage swap. The situation is ridiculous both because Alfred has no idea where Thomas is (At first he doesn’t even remember who he is.) and Esme’s just dumped him because she doesn’t see a future with the low-class son of a butler.

Luckily, Alfred’s able to rope in some help in the form of his military buddies Wallace MacDougal (Ryan Fletcher) and Deon Bashford (Hainsley Lloyd Bennett). The whole conflict takes on a distinctly James Bond feel, emphasized by both the ‘60s setting and the over-the-top villains. Raven Society leader Lord Harwood (Jason Flemyng of Lock Stock and Two Smoking Barrels) first struts on scene in a ridiculous fur-trimmed coat and later attempts to persuade Alfred to join him in his fight to purify England over glasses of brandy in his posh lounge. But the best performance belongs to Paloma Faith as Harwood’s enforcer Bet Sykes. Her weird mix of chipperness and menace make every scene she’s in deeply unsettling, especially when she takes a special liking to Esme.

The one aspect of Pennyworth that does feel like a comic book story is that the show is set in an alternate version of London, though how it’s different from the historical city isn’t clear. Mostly this plays out through visual cues like an abundance of zeppelins and criminals being punished with stocks and pillories in the street, a practice England outlawed in the 1800s. Gotham sometimes feels like a mix of the 1940s, the present, and the future, and Pennyworth‘s London feels like a mashup between the Victorian era, ’20s, and ’60s, which can be disorienting.

The show also doesn’t shy away from fairly graphic violence, whether it’s torture at the hands of the Raven Society, war movie-style flashbacks to Alfred’s service, or gunfights involving Alfred and his pals. It so far doesn’t quite feel gratuitous and the choreography leans towards the sudden and brutal rather than elaborate, providing visually jarring interludes in the intrigue-heavy plot that look good but don’t take too much time.

The plot might be predictable, but the dialogue is sharp and Alfred makes for an especially charming and capable protagonist. Physically, chronologically, and tonally, Pennyworth takes place a long way from Batman’s Gotham, but it still has a story worth telling.

Pennyworth premieres on Epix on July 28.