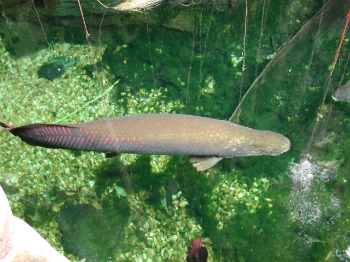 Fish living in piranha infested waters have developed scales to protect them from deadly bites and are now being used to develop new body armors.

As many evil villains will tell you, there is a lot of choice when deciding what to fill your hidden fish tank of death with. Piranhas are often overlooked in favor of sharks, but it’s hard to see why when a swarm is known to rip flesh from the bone in minutes. It’s easy to wonder if anything could stand a chance when placed in a tank with this predator. But now, scientists have found that a fish living alongside piranhas has scales tough enough to resist the fatal bites.

The freshwater fish is known as the Arapaima gigas, which lives in the Amazon River in Brazil, and is found in the same region of water famously known for being inhabited by swarms of piranha. Researchers found that the scales of the Arapaima gigas are capable of absorbing the impact of a piranha bite by flexing and twisting to spread the stress generated by the teeth. Furthermore, the scales are hard enough to cause the teeth to fracture leading scientists to believe the Arapaima rarely falls prey to the snappy predator.

The Arapaima gigas is the largest fish in South American rivers, and can be as long as six feet seven inches and weigh up to 220lbs. Dr. Robert Ritchie, head of material sciences at the University of California Berkeley, led the research and notes how this evolution was key to the Arapaima’s survival. “Without such scales the Arapaima as a very large fish would be easy prey for piranhas.” He goes on to note the unique qualities of its scales and how they are adapting its natural properties into their research. “The fish scale is designed ideally for armor, which has a hard external layer to resist penetration by a bullet and a flexible and tough inner layer to accommodate the excessive deformation without fracturing the armor. What we are trying to do is to create composite ceramics with the hard external layer and some flexible foundation to use as a shield or armor.”

Previous experiments have shown that the scales can survive up to 12 gigapascals of pressure, or 1.7 million pounds per square inch. To put this figure into perspective, commercial diamonds are created using pressures of 18 gigapascals. This discovery may have the potential to lead to incredibly durable armor with the flexibility of a winter jacket.

The Stanley Parable Launches Today with a Trailer

Why We Should Stop Caring About the Zombie Apocalypse