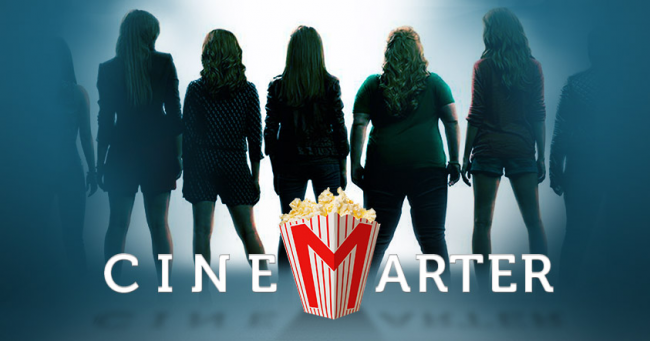 I don’t know if I can actually articulate my adoration for the first Pitch Perfect. Most of it boils down to me loving the music and finding it absolutely hilarious – two elements that completely overwhelm the several problems that one could find if they were to look into it even somewhat deeply. No, the characters aren’t deep. Yes, the plot is formulaic and predictable. But the music is fantastic and the laughs-per-minute ratio is one of the highest I’ve ever seen. The first Pitch Perfect is in my top five favorite comedies of all time.

So, now we have Pitch Perfect 2, almost a carbon-copied clone of the first film. It’s the Hangover 2 of this franchise, except that it’s not one of the worst comedies ever made, like each installment of the Hangover trilogy is. Thankfully, Pitch Perfect 2 really is “more of the same,” which means that it’s very funny, has great musical segments … and the rest of it doesn’t really work all that well. Thankfully, the comedy and music still more or less make up for those flaws – although not quite as well as they did the first time around. Now we’ve seen the same film twice, and there’s only so much we can take before it’s just not fun anymore. 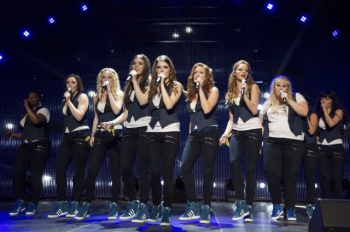 The plot sees the Barden Bellas – an all-female collegiate a cappella group – having an accident at one of their performances that’s so embarrassing that it sees them banned from competing in future competitions. As the reigning champions, though, they’re allowed to go to the World Championships, which if they win, they’ll be reinstated. So, they have to overcome their differences, rediscover their sound, and win the World’s against their new rival, Das Sound Machine, a no-fun German group, led by Birgitte Hjort Sørensen and Flula Borg.

So, yes, it’s the same as the first film, which itself was just Stomp the Yard or Bring it On, but with a cappella instead of dancing or cheerleading. Last time, though, the characters were early in their college years. This time, they’re approaching graduation. The only new Bella is Emily (Hailee Steinfeld). This might not seem like it’s an important difference, but it is. Pitch Perfect 2 is about its characters coming to terms that this is likely the end, and that while their a cappella careers have been nice, there’s more to life than that. There’s a finality to the proceedings.

This idea is propelled forward the hardest by the group’s de facto leader, Beca (Anna Kendrick), beginning to intern at a recording studio run by a condescending music producer (Keegan-Michael Key), whose scenes are some of the funniest in the film.

The success of a comedy essentially just comes down to how often you’re laughing, and if you find yourself laughing several times each minute, the film is a huge success. I did just that.

Really, though, almost all of Pitch Perfect 2 is hilarious, assuming you like crass, borderline offensive comedy that targets everyone – and does so knowingly, with a wink at the audience. The success of a comedy essentially just comes down to how often you’re laughing, and if you find yourself laughing several times each minute, the film is a huge success. I did just that.

About the only times when I wasn’t laughing during Pitch Perfect 2 were during the musical segments, most of which were not designed to be funny. They’re energetic reimaginings of relatively popular songs from the last couple of decades – with a focus on the last couple of years – and they’re wonderful. The choreography is great and the music itself is very pleasurable, assuming you don’t have a hatred of voice-only renditions of pop songs.

These two elements – the humor and music – cover up, more or less, the problems that Pitch Perfect 2 has. But they’re still there, and if you don’t like the comedy or the musical performances, you’re going to notice them even more than someone like me. The supporting characters are even thinner this time around, with Emily – being groomed to take over the franchise if a third film is made – as the only one with any real depth. Most of them continue to be one-note stereotypes who exist to perpetuate stereotypes and give us comedic cannon fodder. The story feels almost identical to the original – itself not particularly original – which means it won’t surprise or challenge you. All of these things are true, but for me, they almost don’t matter. The film is funny enough to compensate for its deficiencies.

Pitch Perfect 2 brought back the one person it needed to: its writer, Kay Cannon. For a comedy, a writer is arguably more important than the director. Elizabeth Banks, who also has an acting role in the series, took over as director for the sequel, essentially mimicking the style that Jason Moore gave us in the first film. The a cappella performances are outstanding, and the comedy is well-timed, but this isn’t a “director’s film.” It’s its stars’ film and its writer’s film.

If Pitch Perfect is a 37″ television, Pitch Perfect 2 is a same-brand 35″ television. It’s technically inferior, sure, but if you like the former, chances are that you’re going to find a lot to like about the latter, too. If you liked the borderline offensive humor and the wonderful a cappella numbers from Pitch Perfect, you’re still going to like them in the sequel. If you disliked the first film, this one will feel like a slog. The cracks are starting to come through, and if the series doesn’t change it up for the next installment, this formula may not work for a third time, but Pitch Perfect 2 is a funny movie with great music, and I thoroughly enjoyed it.

Bottom Line: An inferior sequel that nevertheless is hilarious and contains great music, Pitch Perfect 2 is a very good movie, and one of the better comedy sequels out there.