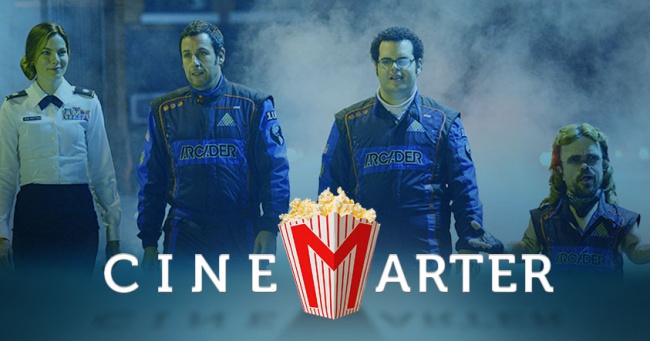 While it probably won’t go down in history as the worst movie featuring characters from videogames – I’m sure one of Uwe Boll‘s adaptations still holds that title – Pixels will be on that list. It’s kind of hard to imagine that a movie with such a great premise – aliens try to destroy our planet by using retro videogame characters – would turn out to be such a drab, unfunny, and mean movie, but then you realize that it’s a Happy Madison film, and it all starts to become clearer.

Happy Madison, for those unaware, is the studio run by Adam Sandler, who is also the lead of Pixels. He plays Sam Brenner, someone who was really good at arcade games in the ’80s and now works as someone who installs home theater systems. His best friend is Will Cooper (Kevin James), another videogame player who somehow became the President of the United States. Yes, you read that correctly: Kevin James is playing the President of the United States. Someone probably should have looked at that casting and immediately thought about how life is too short. James and the rest of the cast are all awful, but most of them are given so little to do that you can’t really blame them for phoning it in.

Anyway, because of reasons too contrived to relay, aliens have challenged humans to big-scale versions of ’80s arcade games. So, it’s up to Sam, Will, and a couple of other individuals lovingly referred to as “nerds” to win the games and save the planet. The idea, as far as the filmmakers are concerned, is to appeal to the nostalgia that current-day gamers might have for games like Pac-Man, Centipede, Space Invaders, and so on. 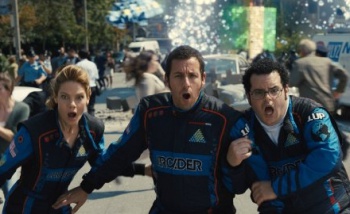 The problem with this is that it’s a PG-13 Adam Sandler vehicle, so the humor is far too often than not too juvenile for that theoretical target audience to enjoy. It instead is geared more toward children around the age of 10, most of whom will have no relation to the games that the film prominently features. It will struggle to hook newer gamers and it’ll alienate older ones. Who, exactly, is supposed to benefit from Pixels? The answer? Adam Sandler.

Here is a movie that feels like it was created just so that we can watch Adam Sandler save the world, get the girl (Michelle Monaghan), hang out with his friends, and garner all the praise that can be heaped upon him in the movie’s universe. Apart from the “save the world” part, that seems to be the end goal of most of Sandler’s comedies. He gets to go on a paid vacation, he gets to co-star with an attractive female, and he gets to bring his friends along for the ride. This is another one of those, except now we have to watch him shoot classic videogame characters and throw insults at pretty much everyone’s way.

Pixels is the type of movie that gives those who play videogames a bad name.

Pixels is a far meaner movie than I was expecting. Sandler’s character isn’t a nice person, although that winds up being par for the course with both the other characters in the film and its overall tone. It doesn’t celebrate nerds or nerd culture; it makes fun of them behind their back, all while pretending to be sincere. All of the characters have negative defining personality traits used to make fun of them. Josh Gad‘s character is an overweight conspiracy theorist obsessed with a fictional videogame character, for example. And let’s not even mention the way the film treats women. Let’s just say that by the point it makes a female character a literal trophy, I was sick of it.

“Sick of it” is a pretty apt way to describe my feelings toward Pixels, actually. It’s boring, unfunny, mean-spirited, and no fun, but it didn’t anger me the way other awful movies can. It just left me feeling apathetic – perhaps “defeated” would be a better way to describe it. I couldn’t muster any hatred for it; I just wanted to move on and ignore the fact that it exists. It’s a really bad movie, yes, but it’s not something on which I wanted to spend any more of my time or thoughts. It passed through me as soon as it entered and failed to leave an impression.

About the only good aspect to Pixels are the special effects used to create the real-life retro videogames. They’ve got an interesting look, and the way they demolish things on our planet gives us a look you don’t often see in films or videogames. They don’t so much destroy things as transform them into voxels, which is accomplished with some pretty good CGI. All this does is serve as a reminder of what could have been done with this premise if it wasn’t transformed into a bog-standard Adam Sandler comedy.

Pixels is the type of movie that gives those who play videogames a bad name. It represents them as awkward and mean manchildren, and despite allowing them to save the world, snickers at them at the same time. It has an interesting premise that’s wasted on this story, good special effects that only serve as a reminder of how good Pixels could have been, and a complete lack of humor. It left me feeling more apathetic than I’ve felt leaving a movie in a while. It’s an affront to videogames, gamers, and cinema.

Bottom Line: Pixels is an awful movie. It’s boring, insulting, unfunny, and a waste of a good premise.

How Many “Earths” Are In The Galaxy? Try Billions