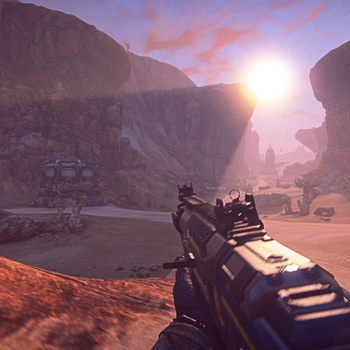 It won’t hit the market for a while, but it will be worth the wait.

Until today, I had been angrily using the phrase “Duke Nukem Forever” to describe the release schedule for the PlayStation 4 edition of Planetside 2. I know that’s probably a little harsh, but Planetside 2 was one of the very first titles that Sony teased for the PlayStation 4 when the system was announced last year. Originally, the game was going to be released during the console’s launch window, but shortly before the PS4 hit the market, Planetside was delayed until “early 2014.”

Now, I’m not very good at operating a calendar, but I think we’re about half way through the year and Planetside 2 still isn’t installed on my PS4, which makes me feel all kinds of negative emotions.

Thankfully, the title isn’t stuck in developmental purgatory. In fact, today I spent a little quality time chatting with the developers and playing Planetside 2, and those negative emotions magically turned positive.

Planetside fans will be happy to know that the visuals really flex the PlayStation 4’s graphical muscles. For anyone who might be thinking about making the transition from PC, the graphics probably won’t be a disappointment. Though, if you’re one of those people who owns a $3,000 graphics card, you might regret making the switch.

But if you’re one of those people, why would you even consider making the switch in the first place?

According to Luke Sigmund, the game’s lead designer, the development team has been spending a lot of time on control pad mechanics. Porting a video game is nitpicky work, and the Planetside team wants to get things just right.

Sigmund and his team are obviously perfectionists, which is a good thing. During my time behind the control pad, the mechanics felt silky smooth, but Sigmund describes the controls as “about 70 percent complete.”

“We’re aiming for sometime this year,” he said. “We haven’t given the date yet, but we’re having a beta relatively soon. And we’ll see how that goes and decide what happens next.”