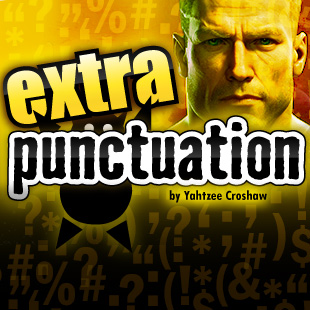 You may recall my XP column that went up after my Wolfenstein review was about E3, since it was E3 that week. So to balance the books, I’m going to use the column that follows my E3 review to talk about Wolfenstein. ‘Cos there were one or two things I still want to cover from that, and which I’ve been given cause to think about after I’d finished the game.

If you missed my review, here’s the short version: Wolfenstein‘s actually good. Certainly a strong top 5 contender. Decent action combined with a heartfelt story (if scattered with a couple of stapled-on wonky bits) populated with good characters. But there’s one specific wonky bit I wasn’t hot on, which I find myself still thinking about, and that’s the choice in the game’s prologue.

How it works is that you’ve assembled a micro-unit consisting of, among others, a Scottish veteran pilot and natural leader, Fergus, and a rookie American recruit, Wyatt. The protagonist makes special note in his internal narration that the pair are taking on a father-son dynamic (little bit ‘tell don’t show’, BJ mate, but never mind), and at the end of the prologue, while captured by the villain, he sadistically forces you to choose which one dies and which one lives. For the record, I saved Wyatt on my first run through. Because Fergus was the character I liked more, and I’d just been watching Game of Thrones. Maybe I wanted to see if the game would manage to come back from that. Spoilers: it did.

I started a second playthrough to see if the game changed much if you took the other option. Spoilers: it didn’t. Well, it changes more than you might think: as well as the person you saved, one other unique character appears in the Resistance later on, and for some weird reason you learn a different lock-picking minigame that changes some level routes throughout the game, but otherwise both characters make the same basic motions and dialogue.

And I was a bit put out, because it smacked of the Infamous Second Son moral choice garbage that basically tricks you into playing a second time on the promise of a whole new experience that, in the end, is not delivered, but you feel obliged to trudge through anyway to see what little is different because of the sense that you haven’t seen all of the content yet. I really felt like Infamous Second Son had pulled a fast one by the time I got to the late-game scene where the main character’s brother expresses pride for him, and found it completely unchanged regardless of how many sign spinners I’d murdered that afternoon.

The one thing I am constantly saying about moral choice games is that it is ridiculous to continually force the choice throughout the game by asking you whether you want to be good or evil with every single plot decision, when benefits only exist for being all the way one or the other. I keep saying, the game might as well just ask you once at the start.

And on reflection, that’s kind of what Wolfenstein does. It’s not so much a ‘moral’ choice, but it is one that changes the path the story takes. And because it doesn’t feel like it has to keep the two paths intertwined, they are free to diverge as much as they like, safe in the knowledge that the player isn’t going to suddenly change their mind mid-way through, knife Wyatt in the throat and resurrect Fergus with the forbidden book of the dead.
The other way plot-path choices tend to manifest is with the multiple ending scenario, where you’re asked to make one choice at the end of the game which dictates what ending you get. This is another system I’ve never liked, because all the endings are cheapened by the presence of the other ones. After a whole game’s worth of fixed plot, suddenly the game abandons canon to show you multiple outcomes, none of which feel like a ‘real’ ending because the first thing you do afterwards is reload your last save and see what the other ones were.

Wolfenstein indicates that it might make a lot more sense if such a choice is made towards the beginning of the game. It certainly makes more sense than choosing the path of the story mere moments before you cease to have investment in it. By forcing a difficult choice on you while you’re still new to the game and have no idea how the results of your choice will play out, we can feel more involved in the following events as we speculate on how we might’ve buggered everything up.

So I guess my point is, if you must have a binary path plot (as opposed to a branching Witcher/Bioware-style plot with a more complex web of choices and consequences) then Wolfenstein may represent the best possible way to go about it. Of course, it’s still not that great an idea. But if you’re going to shit on something, it’s better to be firm than squirty.

Lego Batman 3: Beyond Gotham is More Than “Lego Justice League”