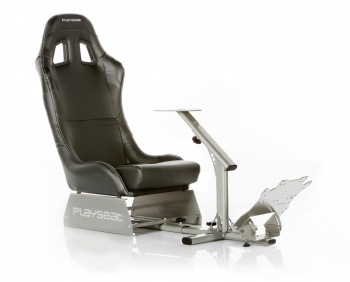 If you’re anything like me, racing games can seem a bit dull when compared to action packed adventure games. Driving around a track over and over again until you take first, before moving on to the next, remarkably similar track, and repeating the process just isn’t something I’ve really enjoyed. Need for Speed: Rivals was a notable exception because of the lack of tracks, as well as the open world driving component. That said, I’ve now enjoyed Gran Turismo 6 far more than I did Rivals, thanks entirely to the Playseat Evolution.

When you’re sitting in a Playseat, racing around track, trying desperately to keep from spinning out on your way around a corner, nothing else in the world exists. The Playseat makes Gran Turismo 6, and ostensibly any racing game, the most immersive gaming experience I’ve ever had. Tightly gripping the steering wheel, manually shifting down gears before a sharp corner, and revving back up to full speed on the straightaway is quite possibly the most fun I’ve had in recent memory. Even when you’re driving the same track over and over again, perfecting each turn and plotting your route around the car in front of you continue to be a thrill.

Assembly of the Playseat is fairly simple, with an Allen wrench being the only tool you’ll need. The most challenging part of the assembly was getting the Logitech G27 Wheel/Pedal set attached to the frame, and the wires fed through, although even that was a fairly simple matter. Once you’ve got it together, adjustment is very straightforward, with every adjustable knob being in easy reach while you’re nestled in the seat.

It should be noted that the Playseat Evolution is just the seat, and does not include the wheel/pedal set that makes it a complete experience. There are no wires for the Playseat itself, since it is quite literally just a racing seat on a frame designed to support a wheel/pedal set. The SV model has integrated sound and vibration, but the Evolution, which I got to try out, is free of electronic components.

The Logitech G27 Racing Wheel is the perfect complement to the Playseat Evolution, and vice versa. Independently, they’re neat ideas, but lack the coherent and immersive feel of the combination. While the G27 is largely designed for at-your-desk use with the PC, it is compatible with the PS3, and the living room is really where the Playseat shines. 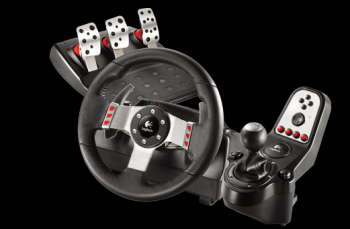 The Racing Wheel has motors capable of spinning the wheel, so there’s always resistance when making a turn, and spinning out will result in the wheel spinning wildly out of control. More than anything else, this real feel of steering lets the G27 mimic real driving so well. That sensation of losing control in the middle of a turn, fighting with the steering wheel to straighten out, and eventually regaining control of your car as you come out of the bend is at the core of the experience. Spinning out on the same turn a few times in a row, before finally hitting it perfectly, and cruising by your opponents gives a profound sense of accomplishment reserved for the most challenging games.

The pedal set with the G27 is super responsive, and the settings typically allow you to adjust sensitivity to ensure that it’s exactly where you want it. I did experience some difficulties on occasion, where the gas pedal stopped revving the engine, but I’m unclear as to whether that was a hardware problem, or an in-game “stall” feature. Likewise, the Shifter is generally hassle free, with easy shifting between gears at all times. The one complaint I have for the shifter is that there’s six gears and no reverse. (I’m told there is, in fact, a reverse, which you access by pressing down on the shifter. The review product had no instruction manual, and it was not well indicated on the shifter itself.) Sometimes you’re flush against a wall, and the only option is to back it up. Fortunately, there are large silver buttons behind the steering wheel that shift gears, and allow you to easily hit reverse as long as you’re in first gear.

The biggest pitfall of the G27 is the limited compatibility. It’s only compatible with the PS2, PS3, and PC, and the games need to have built in support for it as well. Gran Turismo 6 was a purely plug and play experience, but the latest Need for Speed, Rivals, doesn’t support it at all. Fortunately, there’s a fairly extensive list of older racing games in the catalog.

The Playseat Evolution and Logitech G27 combo is best experienced with friends. While playing solo is still a ton of fun, it’s being able to beat your friend’s best time that will create the most raucous racing experience. These peripherals make racing games harder, there is no doubt, but the feel of steering around a corner, the loss of control when you spin out, and using the manual shifter to maximize your speed on a straightaway make racing infinitely more fun.

Bottom Line: Picking up a Playseat Evolution and Logitech G27 Racing Wheel is a sizeable investment, and shouldn’t be taken lightly. It’s also fairly bulky, so you’ll be committing game room real estate to it. That said, if you’re into racing games, this is the only way to play.

Recommendation: You love racing games. You’ve got some extra space in your gaming room. You’ve got the budget for a next-gen console, but aren’t impressed with the game lineup. A Playseat and G27 may well be just what you’re looking for.