It might be my imagination but it seems like triple-A games have been putting more emphasis on story lately. There was Spec Ops of course, and while Inversion‘s dialogue is cliche-ridden and its characters bland it does seem to be at least trying to make an effort. The plot features two fairly massive twists, one revealing something about the world and the other something about the characters. I’m going to put my plot analysis hat on again to take a closer look, so just like with Spec Ops be warned I’m going to spoiler it up big time stylee. I’m not so bothered if you choose to read anyway this time, though, ‘cos Inversion‘s kind of crap. But I’d better give the massive spoiler warning anyway because of my tiresome social conscience. Hey! Massive spoilers! Warning!

I won’t spoil the first twist regarding the world, I think, because it ends up being pretty pointless in the grand scheme of things, and doesn’t change anything about the basic plot skeleton: Your world is being invaded by foreigners and you’re trying to get your daughter back. All the characters can do to the big world twist is briefly react to it and then carry on with what they were doing.

In my Spec Ops review I mentioned that a good videogame story is one driven by the decisions and personalities of its characters. A bad game story is one where the characters only ever react to stuff, follow orders from authority figures, or do things because they’ve “got to” without further explanation. In this case, they’ve got to save the main character’s daughter. Never mind the well-being of anyone else’s kids or the world in general or whether the reward accurately reflects the risks that are undertaken. Maybe this is one of those things you need to have kids to understand, but when our hero finally gets to the child prison near the end, and all the imprisoned children have hope at last and bounce up and down in anticipation of rescue, all this asshole can do is walk straight past them all or demand to know where his one specific child is. You could at least unlock the doors before you go, you prick.

Which brings me to the second twist. The final, ending twist that actually recontextualizes shit. Throughout the game you’re assisted by your hot-headed Hispanic co-op partner because there are certain obligations that exist when you go about ripping off Gears of War. At around the start of the second chapter, after the two of you escape the POW camp and make it back to your home city, the first thing you do to find the daughter is go back to your old home. Obviously she isn’t there, sparking an odyssey through the ruined city, another enemy camp and eventually the enemy headquarters following the string of leads.

But here’s the twist. In a flashback we see right at the very end it’s revealed that your hot-headed sidekick friend found your daughter’s corpse under a collapsed ceiling back at your house. And he didn’t think it would be conducive to your quest to mention it. Your quest to find and rescue your daughter, that is. Now, I do appreciate the effort. This is a better twist than the other twist because it recontextualizes everything that’s come before it. Unfortunately it recontextualizes every character as either really dumb or evil and really dumb. Why the hell would Mr. Sidekick conceal from Mr. Protagonist the fact that they’d already failed the quest? 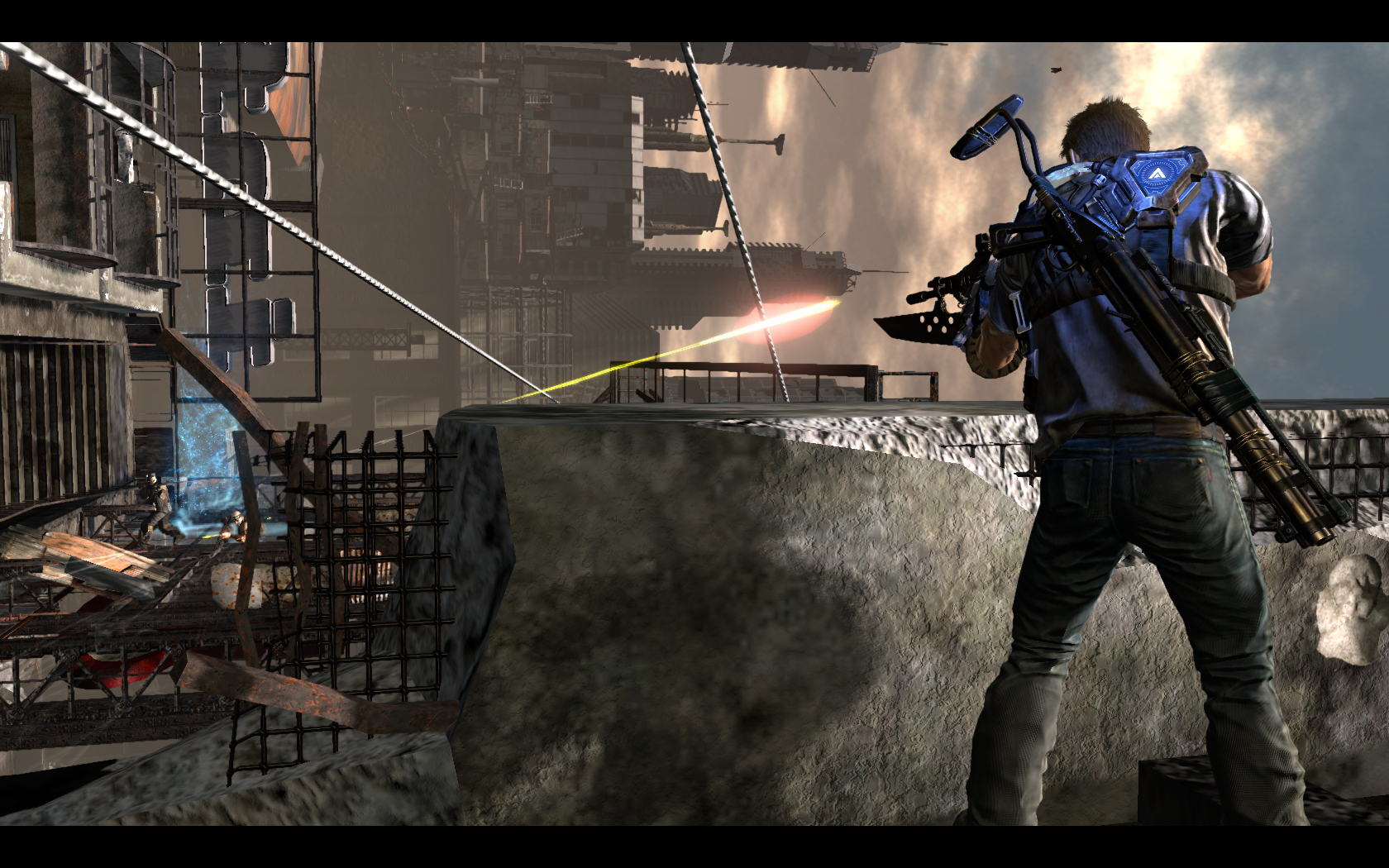 Possibility one is that this was a case of a little white lie spiralling out of control and he just didn’t have the heart to reveal a fact that would rob the guy of his last ounce of hope. When you put it that way it almost sounds laudable. But at some point coming clean and having the guy get really mad at you for a while has got to seem like a better alternative to the seemingly endless chain of suicide missions you’re getting dragged along on and indeed being repeatedly killed on. You know these missions are completely pointless, and you know that the longer you leave it the worse it’s going to be when he finds out.

There’s one scene – after the reveal of twist number 1, actually – wherein Mr. Sidekick momentarily feels really down and doesn’t want to go on, so Mr. Protagonist reminds him of their important daughter-finding quest in order to motivate him. And what a tremendous effort of willpower it must have taken for Mr. Sidekick to not start deepthroating his own gun barrel at that moment. I guess after that point he’s basically given up and is holding out hope that one or both of them will just get their stupid asses killed before this hilarious sit-com style misunderstanding has to be resolved.

The other possibility is that Mr. Sidekick is deliberately manipulating Mr. Protagonist. Throughout the course of their odyssey our heroes do inadvertently have several larger positive effects; they assist in pushing the invaders back, kill a whole mess of the grunty assholes and finally defeat their leader and allow for their peoples’ counter-invasion. So perhaps Mr. Sidekick’s thinking was that Mr. Protagonist’s determination was ultimately a force for good, even if it was based on a delusion, and worth maintaining. The problem with this is that at the time when Mr. Sidekick first decides to cover up the whole daughter dead thing, there are several significant gaps in his knowledge. He doesn’t know that he and Mr. Protagonist are going to be able to basically single-handedly win the war, he doesn’t know the extent of the enemy forces, where they’re coming from or that any kind of counter-invasion is being planned. The duo eventually hook up with organized human forces but separate from them in order to advance alone into enemy territory, ostensibly to find the daughter, when it would be a much smarter move to stick with the guys who actually know what they’re doing.

I’ll tell you under what circumstances this plot twist works, and that’s if Mr. Protagonist eventually becomes part of something larger than himself. If rather than tracking down his daughter being the sole thing on his mind and his sole guiding motivation from start to finish, the hope of one day being reuniting with her was instead just the thing that kept him going when he had nothing else left to run on. Like maybe if he became the leader of the resistance or responsible for the wellbeing of several other people, so that by the time he finally does figure out he’s been chasing a shadow he can look back on seas of hopeful faces and realize that there are more important things than dwelling on failures that couldn’t be helped.

But like I said, I’ve never really understood the parent mindset, maybe this is one of those things that does all make perfect sense after you’ve had kids of your own. Like why anyone would want to have prolonged conversations about how their baby’s been shitting lately.