Developed and published by Daniel Mullins. Released on January 4, 2016. Available on PC (reviewed) and Mac.

Before you continue, The Escapist would like to announce a new promotion. You can now unlock super premium content with a simple one-time payment. Just give us your soul, and you will be taken to our new improved site.

Now imagine the only other articles we have to show you are the same copy pasted “top 10 best things about Duke Nukem Forever” but, when randomly clicking around our home page you find a link that accidentally takes you to our FTP server and our locked articles. Then, inside that FTP server, is a game about ponies…

Pony Island is a new indie game by Daniel Mullins, which is, in effect, a game within a game within a game. You take control of a mysterious unnamed protagonist who is standing in front of a strange hybrid of a PC and an arcade cabinet. It’s on this that you get to play Pony Island, a minimalist platforming game about ponies jumping fences. In short order you beat the game, and are asked to deposit your soul to continue. Finding this strange, you instead manage to break your way into the game’s code, and as you start to poke at things and change parameters, you unravel a story about the lost souls of hell and their war against the devil himself, all wrapped up in a game about ponies.

Pony Island has three distinct sections of gameplay. As said before, the Pony Island within Pony Island is a simple infinite-runner-style platformer. You move automatically click to jump and that’s basically it. Eventually you’ll gain the ability to fire lasers and hover while you jump, and a variety of new enemies will attack you with different behavior patterns, but the game never gets more complicated than this. All said, you’ll really only encounter three different enemies, one of which is a boss, so this is easily the more bare bones part of the game. 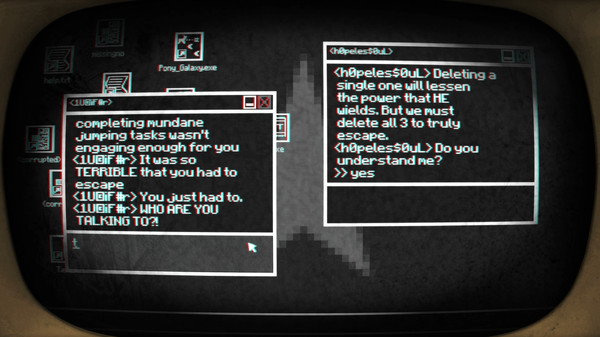 Luckily, you won’t be playing the platformer very often. Instead, you will spend much of your time in the coding sections of the game. Here a “key” will slowly move down line after line of code, executing each line it passes. You have the ability to place arrows, warps, and other coding commands to move the key as you wish, in the hopes of eventually getting the key around obstacles and malicious lines of code to an exit or, even better, a line of code that somehow alters the platformer. These puzzles are well crafted and tend to give you those “Eureka!” moments that make you feel accomplished. This is as close as you can get to calling something the “core” of Pony Island‘s gameplay.

Finally, the last style of gameplay includes screwing around with the interface of Pony Island itself. For example, the game won’t even start as soon as you boot it up. You can’t begin playing unless you go into the options menu and click the “fix start menu” option. You’ll have a lot of interesting interactions this way, from having an IM conversation with an unnamed celestial ally, to perusing the Devil’s personal files, to clicking open Pony Island‘s task manager. Most of these interactions are also puzzles, of a sort. For example, one of the game’s boss fights is a simple task of paying attention to what the boss says, and its way harder than you’d imagine simply because of the amount of clever tricks the game plays on you.

This is also where the game screws with your head the most. It loves to break the fourth wall and make you wonder whether or not you did the right thing. The game will mimic things like your Steam overlay or your Google hangouts in an attempt to make you feel as if the game is invading your own life. It will distract you from playing it and use this distraction as its own victory condition. It wants you to be “stuck” doing anything else but progressing. Soon, it feels as if the devil is trying to steal your soul with his infernal pony game, rather than this unnamed character’s soul. 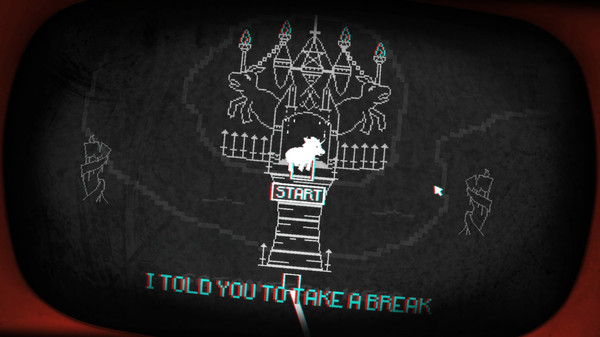 And this is where Pony Island excels. Its ability to immerse you in its narrative by breaking down the barriers between real life and the game world is simply incredible. It’s one of those games that you aren’t quite sure that you have stopped playing, especially because it will choose to close itself at certain points. While I wouldn’t say that Pony Island ever crosses the boundary into scary, even with a few small jumpscare attempts, it is certainly creepy and manages to make you feel a constant sense of unease, as if you were tinkering with things you really shouldn’t and screwing with forces beyond your understanding.

Unfortunately, Pony Island does have some flaws, and not just the purposeful flaws that allow you to tinker with its code. While the platforming sections of the game are supposed to be minimalist and poorly coded within the game’s narrative, they are also minimalist and poorly coded in real life. Simply grazing an obstacle will cause you to die and start a platforming level all over, and hit-detection in general feels spotty. Some of these platforming levels take a long time and dying at the very end only to start the level all over again is enough to make you scream in frustration. Once again, this works in the game’s narrative, where Pony Island is supposed to be some sort of demonic torture device, but that doesn’t suddenly make it fun, especially since you are required to beat these levels to get on to the cooler and more 4th wall breaking puzzle portions of the game.

There is also a cool sidequest about finding secrets that make the arcade machine print out tickets, and if you find them all, you get to fight a special secret final boss and get a secret ending. But you have infinite lives and dying on the final boss (or any boss) simply respawns you immediately, so death really doesn’t matter and it doesn’t feel much like a satisfying reward. The game tries to explain this lack of satisfaction with a vague tie in with the morality of player choice, but it literally never uses morality as a mechanic at any other point in the game, so this feels shoehorned in at best. 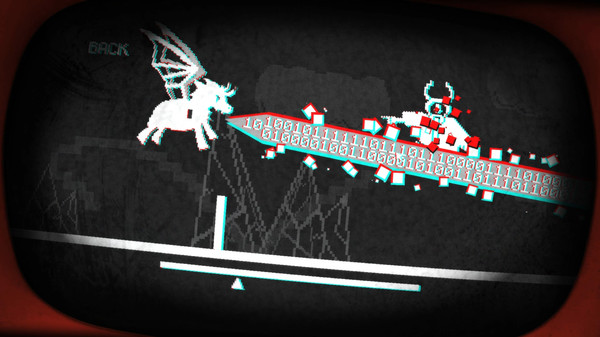 Finally, there are some parts of the narrative that are inconsistent. In the middle of the game there is this plot thread that alludes to you being manipulated by a possibly greater evil, being deceived even as you war against the great deceiver, but that thread just kind of goes nowhere and is never resolved by the time the game ends. Its possible further plot is hidden within Pony Island’s sidequests but I have yet to find it.

But despite these flaws, Pony Island is remarkably clever and well put together. It knows how to tell a story, immerse you in its world, and screw with your emotions in just the right way. It’s a game that revels in making you look over your shoulder, giving you nightmares, and in general shattering your reality. More importantly, it tells portions of its story in ways that only PC indie games can. At a five dollar price tag, it’s hard not to recommend this to anyone who might even slightly be interested in it, especially if they like other games that have a habit of breaking the fourth wall. It’s the first real “meta” game of 2016, and I personally hope this trend of fourth wall breaking games continues well on into the year.

Bottom Line: Pony Island is an incredibly clever puzzle-horror game that manages to immerse you in a screwed up world of ponies, code, and demonic machinations.

Recommendation: Puzzle game fans will get a lot of enjoyment out of Pony Island‘s many coding puzzles and anyone who likes narrative or experimental games will love the way it screws with your head. Just don’t buy this thinking it’s an actual game about ponies.