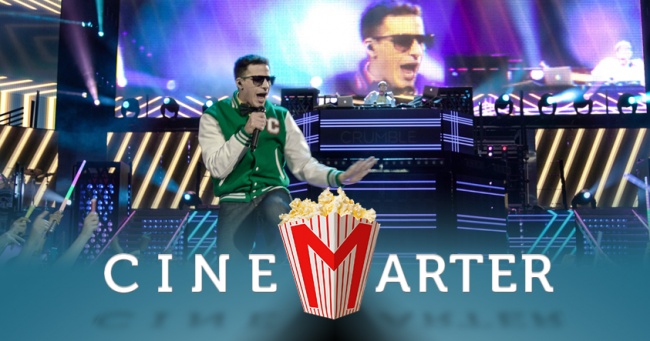 Our obsession with the lives of celebrities might never be higher than it currently is. The internet age has allowed us unprecedented access to them. Add in all of the various backstage documentaries we watch about them or their bands, and you can actually begin to feel something of a connection with celebrities whom you’ve never even met. Popstar: Never Stop Never Stopping satirizes popstar culture, pop culture, and that aforementioned “connection” with the stars. Hey, it’s been over 30 years since This is Spinal Tap. We’re due for another one of these things.

The subject is Conner (Andy Samberg), also known as Conner4Real, someone who started out in a band with a couple of friends, then went solo, had unbelievable success, and at the beginning of the film is only a couple of weeks away from releasing his follow-up, apparently the most anticipated album in history. The album bombs, and we watch Conner deal with that and his subsequent tour, all while alienating those around him after his previous success begins to dissipate. 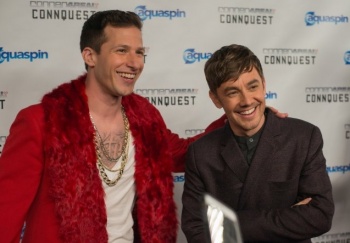 Nothing you see from Popstar‘s plot will be a surprise to you. I mean, doesn’t pretty much every movie about fame deal with this? The man or woman sees success, eventually that success goes to his or her head, and it’s only by remembering to be true to oneself that he or she is able to recapture that success and fix all personal relationships ruined during the experience. I mean, I know nobody saw it, but that was even a subplot in Jem and the Holograms! And if Jem and the Holograms is doing it, nobody is going to think this is revelatory stuff, right?

Popstar does go further in its exploration and satirization of stardom and everything that comes with it, though. There’s a TMZ rip-off that shows up a couple of times, all of Conner’s songs are unbelievably silly, stupid, and funny, and we get to see things like endorsement deals, “yes” men, and various celebrity cameos. There’s an appearance on The Tonight Show, a Seal performance, and a whole lot of wolves. The movie is packed, ensuring that you aren’t bored for even a second of its sub-90-minute running time.

Popstar: Never Stop Never Stopping didn’t look like something that would be worthwhile, but it turns out that it is.

What makes Popstar slightly more interesting is the fact that it’s been created by the three members of The Lonely Island, Andy Samberg, Akiva Schaffer, and Jorma Taccone. Schaffer and Taccone are in the directorial chairs, all three had a hand in writing, and while Samberg is the lead, the other two play important roles, too. There’s some art imitating life going on here, especially with Conner’s origin story, and you can feel that the group is drawing on personal experiences. These men have had some of these successes and failures, and you can feel that coming through in the film.

In fact, that might be why Popstar ultimately works. Conner initially comes across like the vapid star you’d expect, telling everyone what to do, never taking “no” for an answer, and essentially annoying the audience to the point of alienation. But the film gets past that. There’s a genuine heart underneath, and even though the plot takes him on a predictable journey, the film earns any sympathy it generates for Conner. That’s not easy to do.

It’s probably also worth mentioning that Popstar: Never Stop Never Stopping is really funny. Many of the songs are downright hilarious, there’s a great deal of misdirection comedy, and much of the satire is clever enough to generate laughs. You can’t take much of it seriously, but that’s perfectly fine. It’s silly, it’s funny, and it throws enough at the wall in hopes that some of it sticks – much of it does.

Popstar: Never Stop Never Stopping didn’t look like something that would be worthwhile, but it turns out that it is. A very funny look into the life of a celebrity, the film satirizes that culture with brutal efficiency, and actually generates some sympathy for its initially vapid-seeming lead. The music is good, the jokes are constant, there are a ton of celebrity cameos that actually fit in with the theme of the movie, and the mockumentary style more or less helps us ignore that this plot is tired. This could have easily failed, but it wound up being pretty successful.

Bottom Line: Popstar is funny, somewhat poignent, and very efficient in its satirizing of the celebrity life.

Recommendation: Popstar does more than enough well to warrant a watch.