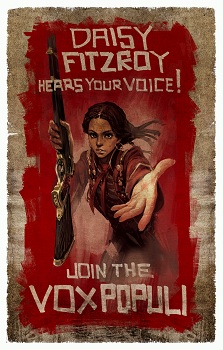 An upcoming e-book will delve deeper into the mysteries of Columbia.

Videogame novels are a little like videogame movies in that they generally run the gamut from “execrable” to “almost tolerable.” Sure, every now and then you get something good, but mostly, you don’t. Still, novel tie-ins are a proven marketing technique, as well as a way for speculative fiction writers to play in some of their favorite licensed worlds. BioShock Infinite: Mind in Revolt is an e-book novella intended to set up the events of BioShock Infinite, and will debut about a month before the game.

Joe Fielder, one of the game’s writers, fielded this project along with director Ken Levine. The novella came about as a response to fan curiosity. “Since we first announced BioShock Infinite, our fans have asked for more information about Columbia and the complex cast of characters that inhabit the floating city,” says Fielder. “Players will have a better understanding of BioShock Infinite‘s world, the struggle between its factions, and the motivations of key characters.” Although Fielder intends to drop a number of tantalizing hints in the book, he promises that it won’t spoil any of the mysteries present in the finished game. At about 30 pages long, it’s probably better to expect a teaser rather than a fully realized story.

At present, the book is only available for preorder on Amazon Kindle and all of its associated apps, with a release date of February 12, 2013. Those who preorder BioShock Infinite will receive this tie-in for free, while Johnny-Come-Latelies will have to dish out $2.99. While Mind in Revolt isn’t the first BioShock book, it is the only one to precede its associated game. Let’s hope that it turns out better than some other novels in the same genre.