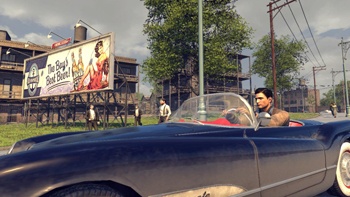 There’s a stealth level in Mafia II. You could be cynical and assume that’s because the game’s publisher (2K Games) insisted on it, capitalizing on the recent trend (Assassin’s Creed, Batman, etc.), or you could assume the developers (2K Czech, formerly Illusion Softworks) simply wanted to try something new. It’s up to you. Whatever you choose to believe, it’s there, waiting for you. And it’s good.

Mafia II is the long-awaited follow-up to 2002’s Mafia: City of Lost Heaven, a game that was at once derivative and innovative, that aped the seminal open-world game Grand Theft Auto III, while simultaneously distinguishing itself with an attention to detail and eye for the “feel” of an era that earned the respect of critics and gamers alike. Part of that was due to the cars – and the driving.

“Everybody says ‘driving around listening to music,'” says Denby Grace, Senior Producer of Mafia II, talking about what gamers appreciated most about Mafia.

Mafia‘s open-world was huge and varied, based on New York City in the 1920s and 30s. Driving from your garage in the Little Italy-inspired East side of town to the suburbs to the West, near the airport, might take 15 or 20 minutes – real time – all the while you were at the wheel of a period-specific automobile, listening to period specific music. If that sounds boring, you haven’t played it.

Every mission involved driving. Sometimes you drove from one place to the next, to begin the mission. Some missions were all about driving – driving someone somewhere, or someone else somewhere else – all the while running the risk of encountering enemies and engaging in a rolling shoot-out or attracting the attention of the cops, who you would then have to elude or outrun. Play a level three times and you’d have three different experiences.

If Grand Theft Auto is about the all of the things you can do in a stolen car, then Mafia is about all of the cars you can steal. It’s a love letter to the very American fascination with highway driving and the criminal underworld which represents one of the few ways a man can expect to indulge that passion to the extreme.

Mafia II promises to take that to the next level, or at least the next era. The new game is set in the 1940s and 1950s, during the era that gave us rock-and-roll, the super highway and lots of fast, beautiful cars.

Back to the stealth level: Your boss has asked you to locate an accountant who’s being held by one of your rivals. If they get him to spill, it’s all over, the family will be ruined. But the family can’t risk all-out war, so you have to go alone, and you have to sneak in, or else you’re toast.

Sounds simple. I hop in my car, tune the radio to “Delta Radio,” the blues channel, and head off to find the place.

According to Grace, getting the music right was critical. He says they fudged the years a bit to capture the “sound” of the era, as opposed to simply drawing a line at 1940 and 1960 and hoping for the best. It was also important to tie the sequel in to the original without it being a quantum cultural leap between games. One can infer Mafia II will feature some music similar in style to Mafia‘s heavily Western Swing-inspired soundtrack, at least at first. The cut off: anything “pre-Phil Spector” says Grace, referring to the legendary music producer who’s “Wall of Sound” technique raised acts like The Ronettes to stardom in the late 1950s. Although a significant portion of his early catalog was recorded in the 1950s, the sound was so radically different from anything that came before , it has since come to define the early 1960s musical era. 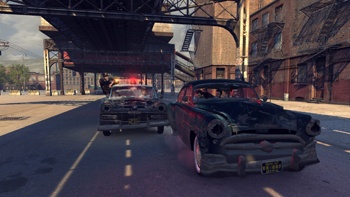 I’m not thinking about the Ronettes in my preview, though. I’m not thinking about the music at all, for a while. I found a stealthy way into the place where the prisoners are being kept – a meat packing plant – and it wasn’t at all pleasant. After slogging through knee-deep sewage – ruining my wise guy suit – I’ve successfully stealthed my way to the room where the prisoners are kept, but for some reason I’ve blown the rescue. Pointing a gun at several armed men should have been on my “not to do list,” but maybe this mafia goon I’m playing is just dumb.

If so, the mafia goons I’m up against are even dumber. Instead of shooting me, they direct the beefiest of them – the guy who had been moments ago wailing on the prisoners with a blunt instrument – to fight me hand-to-hand.

I now get my first taste of Mafia II‘s fisticuff combat. It’s not pretty. It’s sort of a minigame in which you have to learn your opponent’s rhythms and moves in real time. If you suck at boxing games as badly as I do, you can expect to have to redo this a lot. I did.

After several re-tries I finally figured it out and the guy went down. Then there was some shooting after the guys with guns came to their senses. Gun combat is prettier. The guns handle well and it’s entirely satisfying to use them on enemies. Console gamers not used to aiming for themselves will be in for a surprise though, as the game assumes (demands) you have some proficiency with shooters.

After the combat is where the money was for me. One of the freed prisoners decided to go medieval on the ass of the rival boss and – although you were instructed to kill him personally – you nod sagely and watch as he’s pulled into the shadows. It helps you’re in a meat-packing plant. You know he’ll be well taken care of. And then you spot his car outside.

This boss drives the best car I’d seen yet and I couldn’t resist boosting it for the drive back home. I switched it on and the radio blared loud, tuned already to Delta Radio, playing Muddy Waters’ epic blues anthem “Mannish boy.” Buy it from iTunes if you don’t know it. It’s worth the $0.99.

Grace and his team of Czech coders spent three years perfecting the tech to customize what was supposed to be a randomized soundtrack. This means that at a handful of very precise moments in the game, you will get in a car, walk by a radio or walk into your house and a very specific piece of music will be playing – chosen specifically for how it makes you feel based on what you just did or are about to do.

“As far as I know, nobody has ever done this,” says Grace, and he may be right.

What I know for sure is that it works. After I boosted that car, that fantastic black convertible roadster, I spent the next five minutes and twenty seconds doing exactly what I loved most about Mafia, driving around, listening to music, feeling like a badass. Feeling like a man. Like a made man, in fact. And in the very next level, I became one.

Russ Pitts is a rolling stone. Also the Editor-in-Chief of The Escapist.