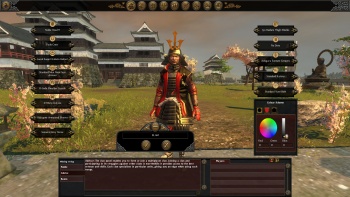 Neither snow, nor rain, nor the ham-handed groping of the TSA agents could keep me from visiting Creative Assembly’s studios last week for my very first chance to play the latest installment in its celebrated Total War series, Shogun 2. Multiplayer is the new Big Deal™ for Shogun 2, so it’s about time we got a chance to play it. The new game follows on the heels of Napoleon in offering up competitive and cooperative campaign play, which uses the same map and clans as the single player game. There’s even unit sharing, so you can give your allies control of a small segment of your armies during the battles.

The big news, however, is the online campaign map and the persistent general profile. Here players will be able to fight across all of Japan, gaining new abilities and units with each victory. Taking one province, for instance, may give you basketwork quivers, which give your ranged units extra arrows during a battle. Another province may give you a Blind Bow Sensei, who you can use to increase the accuracy of your archers.

Everything persists on the campaign map. You’ll retain your specializations, your unique skills and your armies. You’ll even have to worry about casualties, keeping a careful balance between giving each of your units time to earn experience on the battlefield, and time to rest and recover their losses in between battles. You can even upgrade the look and name of your units in between battles, giving Shogun 2 a sort of Warhammer appeal.

Your daimyo will also grow as you play, which adds a tremendous level of context to multiplayer. You can customize your armor based on pieces you’ve earned during play and actually see those choices in the battle maps. This way, you can just look at an enemy general and know the types of things he’s accomplished. And since the armor pieces confer bonuses (and special bonuses if you collect an entire set), there’s a practical benefit behind all this as well. Beyond that, there are retainers you can earn during the game, which take the form of cards played before a battle. You might, for instance, invoke a Cold Snap to reduce the reload speed of enemy archers, or play Bandit Horse Thieves to reduce the speed of enemy cavalry on the field.

There are four broad skill trees for each general. You might focus on Leadership, which contains abilities that affect the entire army. This tree will help you to rally your troops, or even intimidate the enemy. Melee skills will improve your general’s fighting ability, making him a force to fear on the field of battle. If you’d rather specialize in your specific units, you can follow the Bow tree, opening up the option for fire arrows, invisible snipers, or arrows that have better armor penetration. There are similar options in the Physical tree, which grants increases to speed, fatigue, charge and other abilities.

Your general will also include certain traits that describe the way you play. This way, enemies will know what to expect when they play against you. You might be listed as a “leader,” which will let your enemies know that you have lots of skills. You might also be shown to “favor a balanced army,” which means an enemy will have to be prepared to fight against a wide range of troop types. There’s even a trait for “dishonorable coward,” used to punish rage quits. This last one is particularly useful, but even quitters can redeem themselves and remove the tag if they stick around to the end of five separate battles. 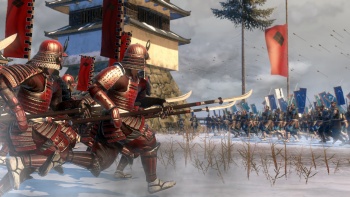 Of course, all this isn’t worth much without the battles themselves. Thankfully, Shogun 2 seems to deliver on this score as well. I settled in for a few matches with Rob, a colleague and friend from another website. We began by selecting an existing general profile, already loaded up with special abilities and veterans. We each chose to build balanced armies, comprised of a core of veterans supplemented by ranks of new troops. For myself, I tried to make as balanced a force as possible, picking katana samurai and spearmen as my primary infantry troops, and a handful of archers and cavalry as well. To round out the army (and spice things up), I added just two gunpowder units.

Figuring that I wanted to do as much damage as possible to Rob before we actually came to blows, I picked my retainers to enhance the accuracy of my archery units and to reduce the speed of Rob’s cavalry. Unfortunately, he had the same idea and picked almost the same set of retainers, so our advantages cancelled each other out.

When the battle began, we found ourselves facing off on two hills sloping down to a broad river. Down the river to my left was an archery building. When captured, it would give a bonus to my troops. This was on my side of the river, so I positioned half of my forces to take it right away. The other half, I positioned on the right side of the map, ready to take a farm on the other side of the river. If I could grab the farm, I could increase the stamina of my soldiers. The middle of the river contained a small island with a building that could increase the effectiveness of my infantry, but I considered that a secondary objective. The banks of the river on Rob’s side were very steep and covered by trees, so I knew I’d want to move my attacks along the flanks. I had my forces ready and the battle began.

Things went according to plan right away. I rushed the two objectives on the wings and, as Rob had spread his line evenly across the field, I was able to dominate on the wings. My archers held off Rob’s river crossing on the left as I took the archery building, while a cavalry rush followed by spearmen and archers on the right gave me the edge in capturing the farm. Once it was taken, my troops were able to fight on a bit longer than Rob’s. As the battle turned in my favor, I moved two units of katana samurai to take out the archers in the woods overlooking the small island in the middle of the river. With them gone, I was free to take the island. By this point, Rob had moved more forces over to try to force a river crossing on my left, but that left his general open in the rear. I quickly took my cavalry through on the right and charged his bodyguards and cut him down. With their general dead, his forces routed and the field was mine.

After that, we had a chance to see the unit stats, hand out promotions and improve the skills of our units before the next battle. For this second round, we wouldn’t be able to use the forces that had been damaged in the fight, so we’d be fighting almost entirely with new, unbloodied soldiers. Once again, we each picked balanced forces and similar retainers. 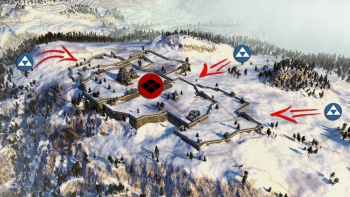 I felt good about my strategy, but my previous victory had made me a little ambitious and Rob a little cautious. I pressed forward even more aggressively, and while Rob sent his forces out to meet me on the wings, he held a sizable force in reserve. Once I made my way across the river and saw he had saved a third of his army, I began to suspect things were going to go badly for me. While his troops engaged my forces and kept me occupied, he waited to see which side needed reinforcements. (A small picture window at the top of the screen shows key events around the battle, which helps generals keep track of the most important areas of the field.) Things on the left seemed balanced, so Rob moved most of his reserves in to smash my right, while sending a small force off to the left to keep things stable. My army began to fall apart before my eyes, with units fleeing the battle in all directions.

After this defeat, we declined a tie-breaker match in order to spend some time playing some siege battles in single-player. Previous Total War games have been heavily focused on sieges, and relied on a single breach and rush to the center as the main objective. The castles in Shogun 2 are much more complex. These castles are defended in stages and have multiple capture points. I found myself defending a massive structure, with multiple levels, numerous gates and plenty of approaches for the enemy. My first plan was to position all my archers along the outside walls and keep my infantry and cavalry forces just inside the gates where the enemies were most likely to force an entry. This strategy worked to blunt the initial assault, but it left me no opportunity to reinforce weak spots, or to withdraw under the protection of covering units. As a result, the enemy (aided by rocket-launching Teppo samurai) was soon able to smash through my outer defenses and found themselves largely unopposed in their march to gain control of the castle.

For round two, I decided to pre-plan for a phased withdrawal, taking some units from the outer defenses and placing them on the inner walls. I’m happy to say things went better this time, but while I was able to inflict many more casualties and keep the enemy engaged all the way to the bitter end, I still wasn’t able to keep my castle from falling.

These preview events sometimes overstay their welcome, giving you more time than you actually need to play and understand the basics of a particular game. I’m glad to say Shogun 2 isn’t like that. Part of me was secretly hoping that we’d be snowed in and given a chance to spend another day playing the game. For now, I’ll just have to wait until the game is released next March. I’m hoping Rob can clear his calendar for our tie-breaker.