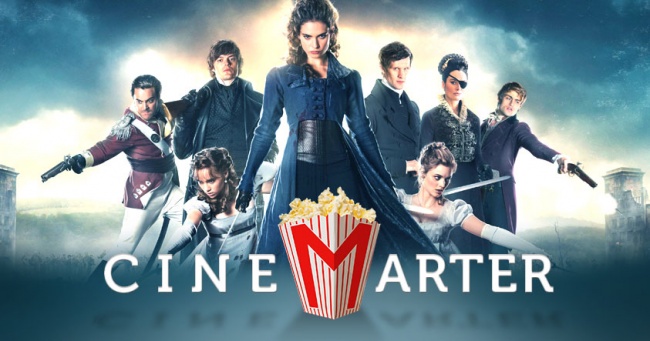 A movie like Pride and Prejudice and Zombies doesn’t have a very high bar to clear in order to be considered a success. Basically, all it has to do is be better than Abraham Lincoln: Vampire Hunter – itself not a good movie – and we’ll all look upon it favorably. It works in a film’s favor when expectations are so low that it would almost have to actively work hard in order to disappoint. So, with that said, I’m happy to report that Pride and Prejudice and Zombies cleared the limbo-level bar set for it walk over. Congratulations, movie, on not being atrociously bad.

I jest. Most of Pride and Prejudice and Zombies is just passable enough to almost be called a good movie even without a lowered expectation going in. The film, based on Seth Grahame-Smith‘s novel of the same name – which is a parody of Jane Austen‘s Pride and Prejudice – does basically everything that you’d expect, except perhaps in how few zombies it actually features. That is, until the end, when they all come out of the woodwork to give us a climactic chase scene. 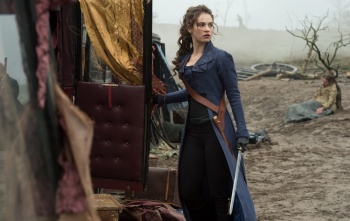 The story? The Bennet sisters have been trained for years to fight zombies, because zombies exist and it’s either that or become “cultured,” which their father (Charles Dance) didn’t think would keep them alive. Smart man. But he’s now getting on in years, and thanks to the laws of the time, the estate can only be inherited by a man. So, it’s time to marry off the women! Jane (Bella Heathcote) is the object most desired, even though our lead is Elizabeth (Lily James). Jane’s potential suitors are numerous, although the primary one is Mr. Bingley (Douglas Booth). Elizabeth finds herself spending a decent amount of time rejecting proposals from men previously turned down by her sister – as well as feuding with Mr. Darcy (Sam Riley), whom she’s determined is an awful person.

So, where do the zombies fit in? Well, they’re a frequent topic of conversation. They serve as a way to interrupt scenes that otherwise don’t seem like they’re going anywhere. They give us reasons for characters to always be in potential danger, since zombies can pop up anywhere – and some of them doing even behave like classical zombies. Some of them don’t even seem dangerous – they can even speak. The film tries to hide what exactly is going on, so I won’t reveal it here, but it likely won’t come as a surprise. Basically, the zombies wind up functioning as another lower class, one which the rich people of the times want nothing to do with. After all, it wouldn’t be Pride and Prejudice if there weren’t class issues to deal with.

Pride and Prejudice and Zombies has a very low bar to clear in order to be considered a success, and it did, indeed, do enough to be called exactly that.

Much of Pride and Prejudice and Zombies has characters conversing about nothing much of importance, saying things that seem silly or stupid given that we’re currently living in 2016 and not the early 1800s, and then ending the sequence with a brief skirmish with some zombies. There isn’t a ton of action, and what we get isn’t particularly good, but it helps break up the monotony of a story we know pretty well. And, well, if Call of Duty is anything to go by, adding zombies to the mix can’t possibly hurt – even if, in 2016, zombies have been done to death.

There’s some humor within Pride and Prejudice and Zombies. Much of it comes from characters basing their actions on what people did 200 hundred years ago, which seem silly and wrong to us nowadays. The film allows Elizabeth to call out and criticize some of these things, which is nice to see. And watching these women slay some zombies is enjoyable, even if director Burr Steers doesn’t have much of a touch for action scenes. Or, maybe the action shot and edited this way to keep the PG-13 rating. A few scenes in particular appear as if they would have been created in a different manner if we were actually allowed to see all the violence taking place.

It feels almost redundant to mention that the film’s set and costume design is great, as I don’t think there’s a period piece given a wide release that’ll be released where that isn’t the case. But, yeah, this is yet another one in which that rings true. You’ll get sucked into the time period thanks to how gorgeous everything looks – until it gets zombie blood all over it, that is.

Pride and Prejudice and Zombies isn’t much of an actors’ showcase, and you’ll struggle to find any standout performances within it. Lily James is feisty in the lead role – and there’s an inherent joy in seeing the latest live-action Cinderella beating up zombies – but not much more. Sam Riley is unbelievably dispassionate as the male lead – another live-action Disney alumnus, now that I think about it. None of the other sisters making any sort of impression, and even actors like Charles Dance and Lena Headey just kind of fade into the background. And Matt Smith gets a comedic relief role that’s pretty funny, I guess.

Pride and Prejudice and Zombies has a very low bar to clear in order to be considered a success, and it did, indeed, do enough to be called exactly that. While it doesn’t do anything brilliantly – except for when it comes to its sets and costumes – it’s just good enough in most of its areas to more or less work. It still deals with most of the themes from Pride and Prejudice, it has a few good laughs, and the zombies both change the plot enough to make it feel fresh and give us a reason for random action scenes. It would’ve been better with an R rating, and probably could have incorporated the zombies more often, but this is a “take what you can get” situation. Pride and Prejudice and Zombies could have been a lot worse, so I’ll take this, be happy enough, and move on.

Bottom Line: Absolutely passable, Pride and Prejudice and Zombies does enough to be considered a success – given the low expectations placed upon it.

Recommendation: If you thought Pride and Prejudice needed zombies in order to make it good, well, this is exactly that.