I think it’s fair to say that I’m very fond of open world games, from the balls-out fun chaos of Just Cause 2 to the carefully-planned surgical strikes of Assassin’s Creed. It seems like the sandbox is the only thing that really makes the most of what triple-A technology is capable of, in gameplay terms at least. I mean, creating a nice mountain scene as a backdrop for your shooter doesn’t have the same appeal if you can’t then climb to the top of the mountain and detonate enough explosives to have it re-classified as a hill.

But in the aftermath of Sleeping Dogs I have identified a number of recurring issues with sandbox games that could be rubbed out with a little more thought at the design stage. Specifically, that number is two. I have two issues. Here is the first one.

1. A lack of coherent timekeeping

It’s no new observation that there’s a rather drastic discrepancy between the story missions and the open-world gameplay in sandbox games. This is best illustrated by the fact that, in Sleeping Dogs, Wei is only truly inducted into the Triads after he’s proved a willingness to kill within a story mission, even if he has been busily shoving people into bandsaws and crushing their heads under engine blocks throughout side missions up to that point. GTA-like games have historically gotten around issues like this by making the main characters obvious amoral sociopaths like Tommy Vercetti or Niko Bellic so that nothing the player does to amuse themselves between missions seems inappropriate.

But an important part of linear storytelling is having a sense of what kind of timeframe the game’s story operates in. Going merely from game play time it might seem like Wei rises to become the leader of his particular gang within the course of a weekend, but it’s implied that all the free-playing you do between missions is actually representative of anything up to several months, even if you go straight from the last mission to the next. I think this is a failing of sandbox storytelling because having a firm grasp of the timescale is important to things like characterisation: someone working at their quest for years comes across as far more determined and tragic than someone who’s been working at it for a fortnight.

Did you know that the story of Assassin’s Creed 2 takes place over the course of 16 years? Ezio’s family is killed in 1476, and the final confrontation takes place in 1492. But this timeframe is made very unclear by the in-game events. Occasionally it flashes up the year, but unless you made a point of memorising the previous 4-digit number, it doesn’t sink in very well. I always felt that the simplest of changes here would have made a vast difference: all they had to do was replace the year reminder with a relational statement like “Two Years Later”, and it would have given a much clearer handle on the timing. The faintly ominous “One Year Later” chapter break screens in Grim Fandango gave a very coherent sense of the game’s epic scale.

Alternatively I always liked the Dead Rising approach where there’s a strict in-game clock and events only become available within certain times, but that probably wouldn’t suit a story taking place over weeks or months or years. No-one’s going to keep their consoles on that long. 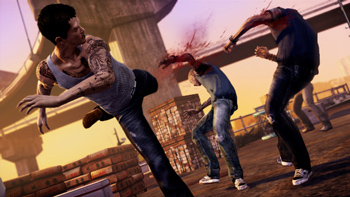 2. Not enough things to spend money on

This is another thing that Sleeping Dogs put me in mind of, because in the second half of the story campaign my various exploits had left me with several hundred grand in the bank and nothing to spend it on. Except new cars to be stored in my garage, but take a look around, guys, there are cars everywhere. Far more than there are garages. Or police officers who might catch you nicking one. Throwing money at you is supposed to be a gameplay incentive, but once you’ve got more than you could ever reasonably need, that incentive disappears, and the game starts to get boring.

Then there are games like the aforesaid Assassin’s Creed 2 and GTA: Vice City where you can use your money to buy property, but this usually only has the effect of increasing your income, trapping you in this economic loop in which you essentially attempt to use a firehose to hold back the tide. When you get right down to it, a player of a game can only be effectively rewarded with gameplay. With fun. And money’s fine as long as there are fun things in the in-game store to spend that money on, like tiger costumes and, just off the top of my head, jetpacks, but otherwise it’s just passing the buck.

If No More Heroes had had a decent variety of stuff to do in its sandbox map I would’ve given it at least two more gold stars, because I actually liked the mechanic in that game where you had to pay huge sums of money to do the next story mission. That’s a perfect example of simultaneously organic and structured gameplay. As is the start of Morrowind when you’re told to basically do whatever the fuck you like to reach a certain level of wealth and competence before you get any more story missions. This is incentivising the player to actually sandbox it up in the sandbox, to experiment and explore and find their own level of fun. As opposed to the kind of sandbox where the vast majority of it exists only as a needlessly elaborate corridor separating one story mission from the next.

So money by itself isn’t a reward. But if Sleeping Dogs had demanded I use that money to, say, buy a certain car before I could do the next story mission, or if purchasing properties in AC2 unlocked additional quests related to those properties, then those would be rewards that would actually motivate me, because I’m being provided with more gameplay.

I’ve just thought of something. What if you did the standard sandbox crime game thing for the first half of the game, gradually acquiring more and more money, luxury apartments, fancy clothes and powerful vehicles, but then at the start of the second half your character falls for some dastardly trick and the villain steals everything you have? That’d raise the stakes for the final act, wouldn’t it. It’d make it easy to hate the bad guy ‘cos it’s taking something away from both the player character and the player, and their eventual defeat would be all the more satisfying. There I would stand on the edge of a tall building, watching Count Von Bastard plummet to his splatter death, before taking a drag on a cigarette and muttering to no-one in particular that this is what happens when you get between a man and his jetpack.