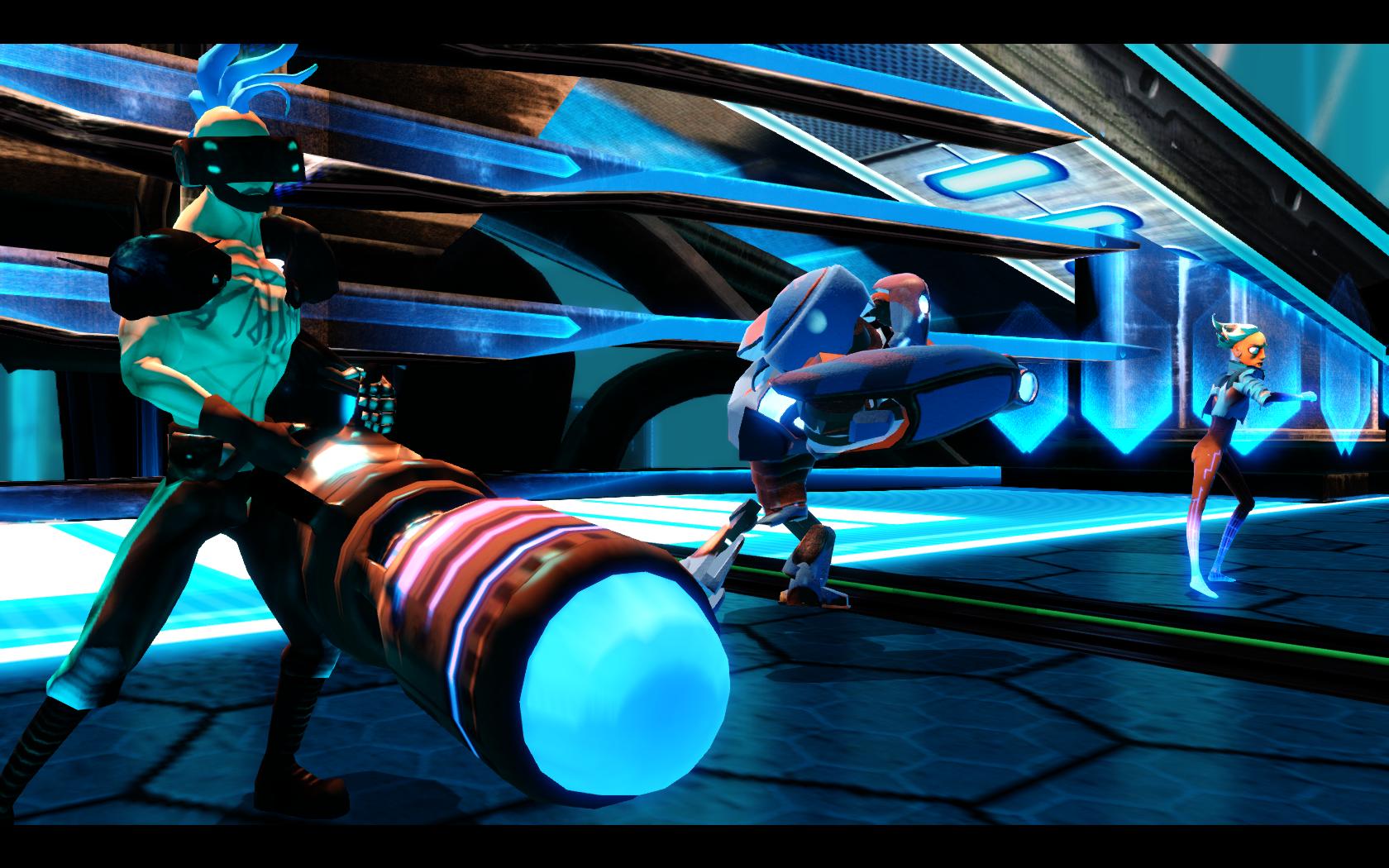 In its current form, Project Cyber is an interesting proof of concept for a game – it’s a physics-based hockey-style sports game mixed up with a few MOBA elements for flavor. In a straightforward 3 vs. 3 match, players battle to move a floating hexagonally shaped puck into the opposing team’s goal – but its much more easily said than done.

Project Cyber has three characters to pick from, with a fourth planned judging by the character selection screen. Your choices include a giant robot, a future-punk popstar (who, judging by her gigantic eyeballs, has been mainlining caffeine to get pumped for the game), and a shirtless “rebel” dude who wears an Oculus Rift while wielding a giant cannon. Each of the three characters have a handful of physics based powers at their disposal to push the puck around; All have a basic “push” ability to get the puck moving along with a more direct ability, such as the robot’s barrier or the popstar’s “Star Missile” that can launch the puck screaming across the map. Each of the characters also has an ultimate ability they can activate, such as the rebel’s “Wrecker Missile” which will fly across the map and send the puck flying upon exploding. Currently the ultimate abilities leave a lot to be desired, as they don’t seem to be a major game changer in terms of how you can interact with the puck or other players – the popstar’s ability, for example, just seems to teleport her forward in one direction at an incredibly high speed, useful for gaining ground but that’s about it.

To mix things up, Project Cyber also randomly throws in arena events that last for about a minute or so which can switch up the playing field dramatically. There only appear to be two in play now; one which bisects the playing field, leaving a giant gap running down the middle that can send you temporarily to your death should you fall in, and a storm event that causes high winds to blow across the arena and send the puck flying. The Storm event is the most interesting of the two events so far, as it forces you to try and angle your shots to get the wind to work in your favor. In one match, I actually managed to curve the puck at high speed into my opponent’s goal using the blustering winds to my advantage, though I think it may have been due to blind luck.

As the game is in a “pre-demo” phase (not even in alpha, according to the developers), Project Cyber has quite a few graphical issues, typos, and some slight game breaking bugs and missing features that hamper the overall experience. But as far as first impressions go, there’s is something catchy about Project Cyber‘s physics-based mechanics that are fun to play around with.

There’s no solid release date for Project Cyber just yet, but you can register at Spearhead Game‘s site for the chance to pick up an early access Steam code. You can also check out its weekly Twitch stream for more updates on the game as its development progresses.