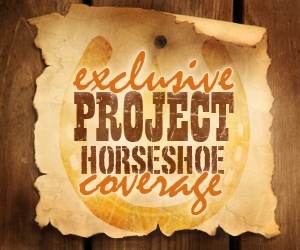 Project Horseshoe doesn’t have keynotes. The annual invite-only think tank for game development’s best and brightest has a focus on brainstorming and breakout sessions, but there are still a handful of talks on the first morning.

In his introductory remarks, host George Sanger said, “I’ve asked Mike to let it all hang out – if you can’t do it here, it can’t be done.” And in the next 25 minutes Mike Verdu would give an unvarnished look at the successful production of The Battle for Middle-earth and Command & Conquer 3 games from EA LA and their team structures.

“It’s a topic I think of as meta-design,” began Verdu, who was appointed new General Manager of Electronic Art’s Los Angeles studio four days before Project Horseshoe. “It really comes down to the interaction of large numbers of people and the creative process.”

“Team size affects creative output,” he said. “You can do things that are in a traditional, hierarchical way, and get a process that is somewhat inefficient and might make people unhappy. Or you can actually unlock the creative firepower of a big team, and the result is spectacular.”

Verdu started in the game industry in 1989, partnering with Bob Bates to start Legend. Their peak team size was 10, half that for most projects. Ten years later, Verdu found himself working on a 3-D fantasy action game called The Wheel of Time, powered by the Unreal engine. That game had a 25-person team.

When Verdu joined EA in 2002, the teams started getting bigger, between 40 and 50 people. Then there was a big surge in team size to over 80 people. That’s the point where it’s hard to know the names of each team member and what he’s doing.

Verdu told the audience that between 1989 and 2004, he was used to working with a traditional development structure. There were leads and three groups of people: the artists, the designers and the engineers. This was fine when the teams were small.

The magic size, it seems, is between seven and 12 people. Above that threshold, it’s hard to get the same sense of family or investment in the work.

The inefficiencies introduced by larger teams could be managed until they grew beyond 60-80 people. “What happened then was we had our group of leads and what were essentially bottlenecks between the leads and these large organizations that were working on different parts of the game.”

Leads could only process a little information at a time, and the same was true for their communication output. The development process became inefficient, and a by-product of this organizational structure was a lack of investment and ownership on the part of the team members. “No one felt like it was their game,” Verdu said, explaining that the organizational structure sometimes caused feelings of detachment.

After a particularly difficult project in 2004, the RTS team at EA Los Angeles tried something new with Battle for Middle-earth II. “We created 15 teams instead of one.” 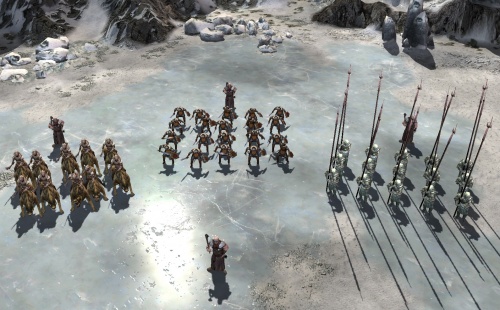 Each of those teams was assigned a mini-project. Verdu said the only way this works is for each sub-team to have leaders with unique identities and a degree of empowerment. “They are the equivalent of small design teams.

“We had 15 projects flying in formation, instead of one monolithic organization.” Verdu describes it as “all of the magic of small teams” but working on one big project. Even if it was the user interface team, it had a designer, it had an engineer and it had some artists. “They really were their own little project.”

“The creative work that came out of those teams was amazing,” Verdu said. There’s a delicate balance to maintain when guiding the teams and giving them the freedom to be creative.

The team leads would meet daily, with the goal of keeping those meetings as short as possible. They found that good communication would “keep the planes in formation.” And when the senior development director took a leave of absence for a family illness, the de-centralized teams were able to keep going.

Verdu began to notice something that looked like flocking behavior, with an instantaneous change in direction when one team broadcasted a discovery to the other teams. “Everybody turned on a dime. It was organic and almost hard to understand. … It’s like we tapped into this thing we didn’t entirely grok.”

Frequent integration was also key. “It almost felt kind of like open source.” On Battle for Middle-earth II, the results were a better game that took half the time as the first game in the series, without severe crunch time. “People had fun with the project. They felt like it was their product.”

And it was very well received. “I considered that a big success.” Verdu’s next project was Command & Conquer 3, and he used the same small-team method with an even larger number of developers. Again, the developers shipped an RTS game that everyone was proud of – “passionate, in fact” – and it was a critical success.

“Organization design with these big teams and this open-source method of design is really part of game design,” Verdu said, who believes that the days of the giant teams are over, even for EA. “Our teams are ramping down in terms of size, and we’re giving them more time.

“Let’s take a smaller team, work for longer. … It’s a lot more sane. I probably don’t understand it yet, but it has just amazing power.”

“Organization design is game design,” Verdu said. “I’ve really become a believer in this. From now on, when we put a project together, we’re going to be thinking a lot about how people work together, because it’s kind of meta design – how you design your organization will drive the design of the game in a profound way.”