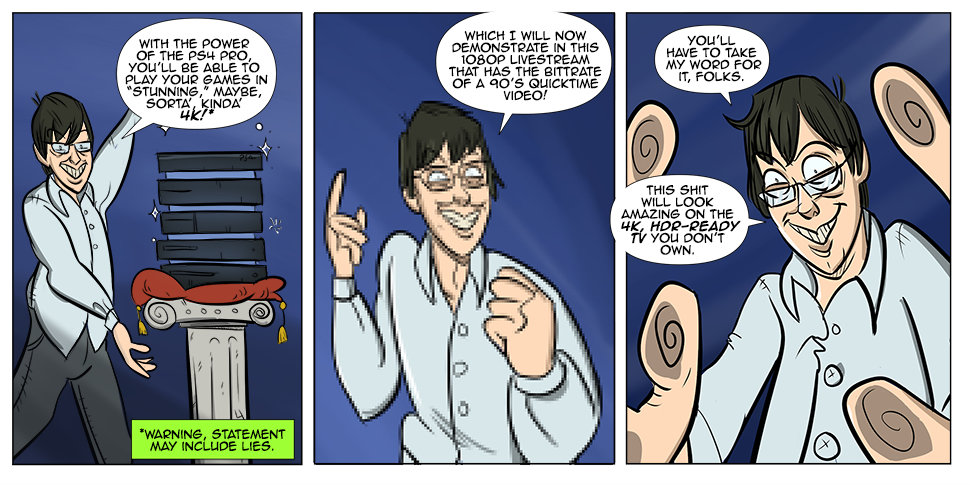 The PS4 Pro is a weird product. In theory, I’m the target audience: The enthusiast player willing to put out more cash for better image quality and do the research into the technical jargon surrounding console presentation standards. A PC gamer who’s picked up a console for the exclusives and absolutely hates having to play games at sub HD resolutions at sub 30 framerates.

And, yet, the PS4 Pro does nothing for me, and I imagine it does even less for the general audience. Most games won’t run at native 4k on the PS4 Pro. Instead, they’ll be upscaled to a 4k output via checkerboard supersampling (and then downscaled to 1080p if you don’t own a 4k tv). To be fair, this shit looks great by console standards: Less jaggies and edge crawl, and higher image quality, but not quite the crystal clear “crispness” of native 4k. The problem is, MS and Sony had problems selling gamers on regular HD back when the PS3 and 360 came out, and that upgrade was night and day compared to the more subtle jump from 1080p to 4K(ish), especially on 1080p TVs. The Pro’s other flagship feature, HDR, is also impressive, but suffers from a similar problem. 4K TVs are expensive. 4K TVs with HDR are even more expensive. 4K TVs with HDR and levels of input lag comfortable for gaming just don’t exist yet.

I was hoping that the Pro would allow PS4 games to run at 1080p at higher framerates, and while some games will have a more “consistent” framerate, the lack of a CPU upgrade (the PS4 runs on a junky-ass netbook processor) means current-gen games will still be largely CPU bound and won’t be making the jump from 30 to 60fps.

I personally don’t care about the lack of a HD Blu-Ray drive because my video consumption is largely digital these days, but that Microsoft is including one in it’s entry-level One S while Sony’s top end “premium model” lacks the feature is not a good look.

All in all, it seems like this is Sony coasting on its easy win the PS4. The Pro seems like a tiny step forward that’s mostly focused on providing a better VR experience: And no one knows how that shit’s going to pay off in the long run.

Meanwhile, from what we’ve seen of the Scorpio’s specs, Microsoft is looking to completely reset this console generation rather than prolong it. I don’t blame them, they’ve got nothing to lose after the Hindenburgian disaster that was the One, and if they’re right about the 4k market and HD Blu-Ray, it might be an opportunity for them to claw back some market share.