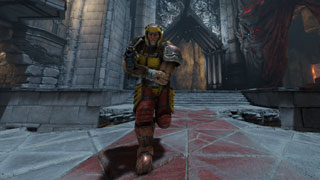 If you’ve been trying to play the Quake Champions closed beta and running into server issues, here’s some good news: Bethesda and id are working to add more server capacity. The first wave of beta invites went out yesterday, and apparently there were more players partaking than anticipated, because there were a few server issues.

Due to overwhelming demand, we're working to increase Closed Beta server capacity for our first wave users. Thanks for your patience. #Quake— Quake Champions (@QuakeChampions) April 6, 2017

While it might seem odd for a company to need to add capacity when it knows exactly how many closed beta invites it sent out, it’s not all that unusual. Companies often try to estimate how many players will play concurrently so that they don’t overspend on servers. Sometimes it works out, and sometimes it means that there isn’t enough capacity if a high percentage of players decide to play at the same time.

The game was down this morning for three hours of maintenance, so hopefully players won’t see server issues going forward. If you haven’t gotten your closed beta invite yet, id says it plans to send out more soon. If you haven’t signed up for the closed beta, you can still do so on the official Quake Champions website.

You Can Grab Paradox Titles Cheap in the Steam Weekend Sale