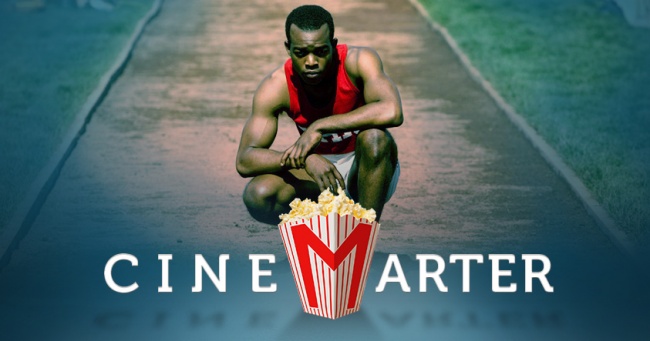 Based solely on its story, Race should be a real winner of a movie. At the 1936 Olympic Games – which were held in Berlin, Germany, while the Nazis were in power – track and field athlete Jesse Owens, a Black man, wound up winning four gold medals, essentially giving a big middle finger to Hitler and the rest of the Nazis. That’s a pretty cool story, and the best part is that it actually happened. All you have to do in order to make a good movie out of it is give us some background on Owens prior to the event, show how he overcame the racism of the period, and then have some thrilling races at the end. It’s a story that feels tailor-made for an inspirational and impactful biopic. Race, while not terrible, is underwhelming, overlong, and fails to live up to that potential.

Owens is portrayed by Stephan James in a performance that is better than the movie in which it is contained. Owens came from a poor background and was the first in his family to get into university. He decided to go to Ohio State University in order to train under Larry Snyder (Jason Sudeikis) with the eventual goal of competing in the Olympics. While there, he dealt with racism, but ultimately did go on to compete in Nazi Germany in 1936. It takes Race over two hours to tell this story, and there’s very little else that you’ll learn about Owens in that time. 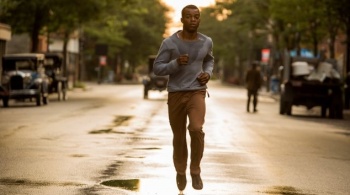 I guess that’s not fair. He had a wife, Ruth (Shanice Banton), with whom he has a daughter, who at first doesn’t want to marry him because he cheated on her, but then does marry him because, well, he said “pretty please.” And he almost didn’t want to go to Berlin because he was urged not to in order to send a statement regarding the discrimination taking place both at home and abroad. But outside of that? There isn’t much here. This version of the Jesse Owens story is lacking in detail and depth about its protagonist. Oh, Owens is front and center for most of the film, but we don’t actually learn a whole lot about him or his life. Reading a single Wikipedia page is significantly more informative.

So, then, what does Race have going for it? Well, it shows us the politics of the era through Avery Brundage (Jeremy Irons), a prominent member of the United States Olympic Committee, who fought tooth-and-nail against a complete boycott of the Olympics – even going to Germany in order to ensure that the United States’ demands were met. We get to learn a decent amount about Larry Snyder, Owens’ coach. And, perhaps most interestingly – and interestingly – we watch how Leni Riefenstahl (Carice van Houten) fit into the 1936 Olympics. She, in case you didn’t know, directed Olympia, which documented the Games. She was also the Nazis’ chief propagandist – Triumph of the Will was her film – and defended Hitler on several occasions – even though the exact nature of her relationship with the party is still unclear.

Race tells a story that’s worth seeing, but I’m unconvinced that this is the film in which to see it; Jesse Owens deserves better.

In the film, anyway, Riefenstahl is presented in an extremely positive light. She acts as a translator and a documentarian with a sympathetic eye toward Owens – which is true, although it basically glosses over her affiliation with the Nazis beyond filming the Olympics. Race does a better job attempting to rehabilitate Riefenstahl’s public image than anything else. Yes, in a movie supposedly about an incredible Black athlete in Jesse Owens, it’s more interested in a Nazi propagandist and two White males. When your real-world protagonist plays second fiddle to a Nazi propagandist, you’ve got a problem.

Moreover, Race feels about as generic as they come. It adheres strictly to the biopic formula, right down to the real-life pictures of Owens that are used to close it out. It doesn’t do much for racial issues beyond pointing out how both Nazi Germany and 1930s America were extremely racist – an observation that I’m pretty sure a grade schooler could point out. It lacks venom. Its title, “Race,” is such a good one, but the film fails to capitalize on its double meaning. It’s not angry about the racism; it includes it because it has to – because it’s a fact.

Race doesn’t even make the Olympic events particularly exciting. Owens is portrayed as far-and-away the greatest athlete competing, and there’s no attempt to generate suspense when it comes to whether or not he’ll win. The only one that comes close is the long jump event, in which he develops a rivalry/friendship with the German competitor, Luz (David Kross), but even this is tepid when compared to good, dramatic sports movies. It’s a great moment in history that simply feels underwhelming. This shouldn’t even be possible, but director Stephen Hopkins has made it so – yes, the man behind Predator 2, A Nightmare on Elm Street 5, and The Reaping directed Race.

Race tells a story that’s worth seeing, but I’m unconvinced that this is the film in which to see it; Jesse Owens deserves better. Stephan James is a good actor and he delivers a great performance here – all the performances are good; the acting isn’t the film’s problem – but it goes toward a film that doesn’t give us a whole lot of depth or detail about its protagonist. It’s too interested in improving the public image of a Nazi propagandist to do that. Mostly, though, it’s a bog standard biopic that can’t even make its Olympic events anywhere close to thrilling.

Bottom Line: Race shouldn’t have trouble being interesting, enjoyable, inspirational, and exciting. But it isn’t any of those things.

Recommendation: There is an Emmy Award-winning television film from 1984 that also told the story of Jesse Owens. You’d be better off seeking it out than watching Race.