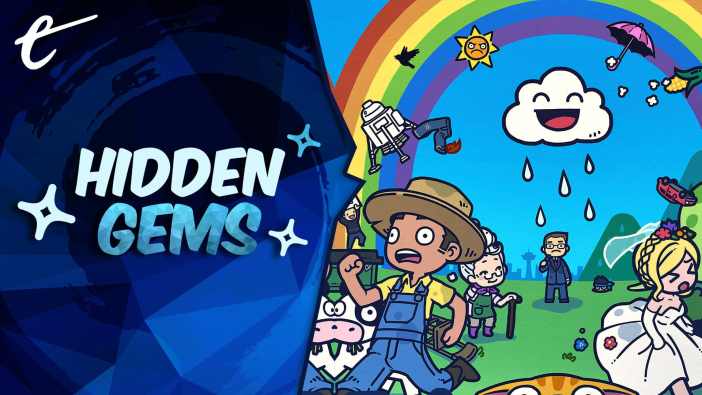 Back in August last year I checked out the free demo of Rain on Your Parade, a tight physics puzzler that used a cloud’s various abilities to cause mayhem. After over two years of development, that little prototype has blossomed into a grand adventure, providing 50 levels of playful destruction. While some levels are stronger than others, the intensely cheerful nature of the game makes it a joy to play, brightening even the darkest of days.

Rain on Your Parade is framed as a grandfather telling a bedtime story to his grandson, the characters and environments all cobbled together from bits and pieces in the child’s room. He recounts the adventures of Cloudy, a raincloud who delights in causing mayhem.  While Cloudy has found some satisfaction in ruining local weddings and soaking school children waiting for the bus, he longs to live in a place where he can rain on whatever he wants. Whispers of other clouds tell of a mystical land named Seattle, where the rain never stops. Determined to find this miraculous place, Cloudy travels across the world, showering down rain on everything along the way.

The levels in Rain on Your Parade each form a little puzzle box, a scene where Cloudy needs to complete several objectives to progress. Some tasks are easy: rain on every human is a common one, and watching the people scatter never fails to amuse. Others are trickier, like ruining a birthday party by setting all the presents on fire. Cloudy cannot burn things directly, but hovering over certain liquids lets him absorb their power. A carefully placed line of flammable tar from a candle to the birthday presents will set them alight, ensuring the bully from school will never want to celebrate his birthday again. Each level has both a main objective needed to progress and optional extras — trickier requirements that award a cosmetic prize when completed. 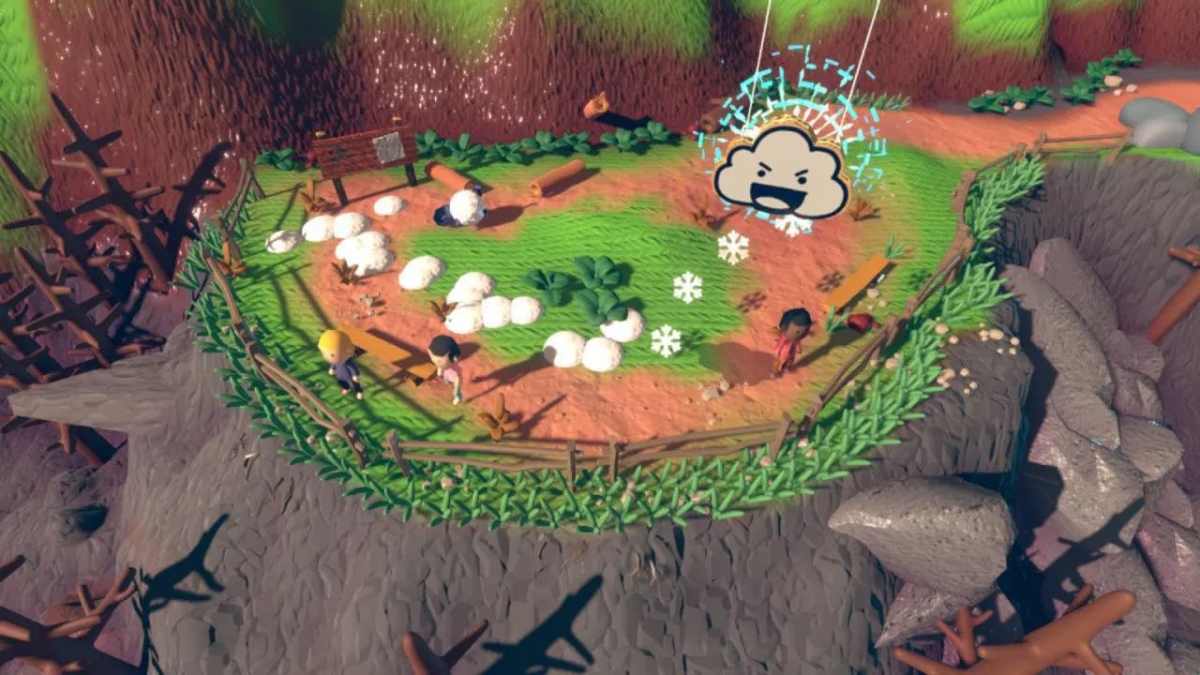 Over the course of the adventure, Cloudy learns a variety of abilities — using thunderclaps to hit switches or startle civilians, snow to create slippery surfaces, and whirlwinds to pull objects around. Each skill is easy to use, and most maps provide a water source for Cloudy to charge his abilities, putting the focus on solving the puzzle rather than conserving resources.

Hidden-object games definitely share some DNA with Rain on Your Parade, with searching for that one last crow to startle or tree to water playing a part in the bigger maps. Others involve more timing, like placing snow over a road so a tobogganer slides into a lake. I really enjoyed the maps that required the player to pay attention to the order of events, such as a restaurant scene where the objectives include trapping someone in a dark bathroom, tripping over the waiter when he’s carrying food, and linking up power supplies to make a mess in the kitchen. Playful homages to other games add a good deal of variety, such as the Katamari Damacy-like black hole level where all items need to be sucked up, or the Zelda-inspired RPG level that takes Cloudy on a traditional RPG journey.

In other areas, however, it felt more like having an impressive number of levels was more important than the design of the levels themselves. Clones of Breakout and bowling felt like filler, and the difficulty curve is quite inconsistent. Wonderfully involved boss encounters with Dr. Dryspell, Cloudy’s arch-nemesis, are quickly followed by levels like the bathroom-cleaning one, which requires no thought or strategy whatsoever. 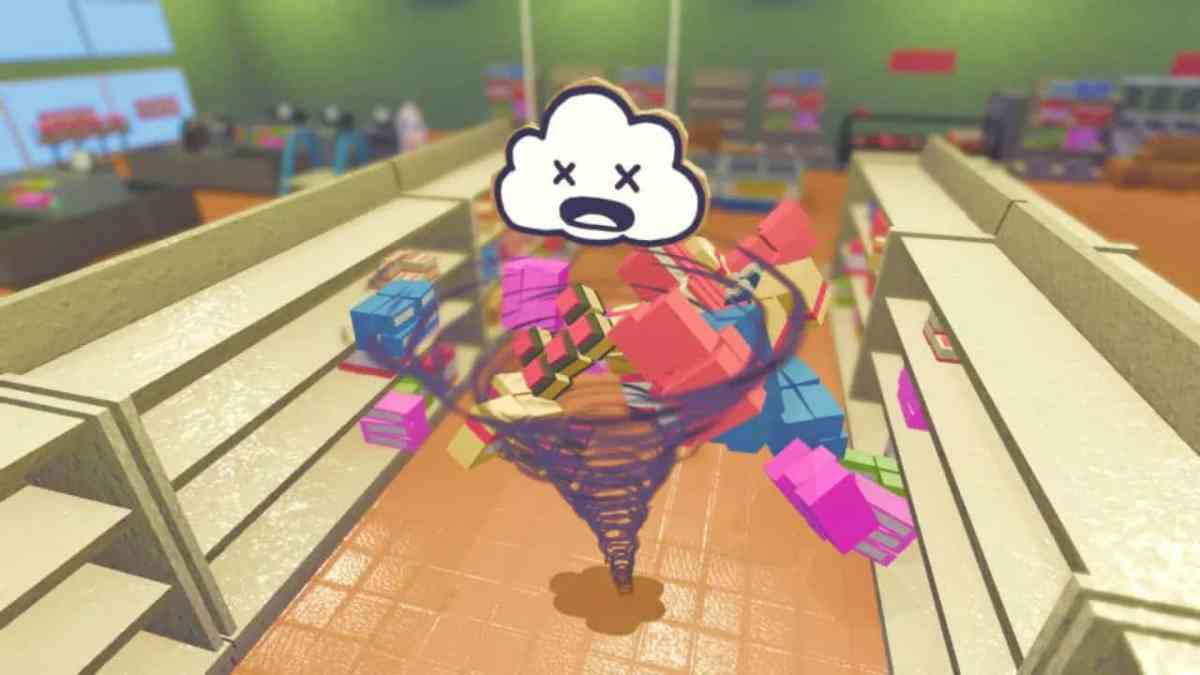 I was really hoping for an intensive “use everything you have learned” approach for the finale, but saving Seattle is done with an awkward tower defense game instead. Cutting the campaign down to perhaps 30 levels, with the minigame-style extras separated into a different mode, could make for a tighter experience. Alternatively, I found New Game+ to be exactly the challenge I was looking for, offering new objectives on each level and the option to have an angry sun chase you around. Giving players the ability to unlock New Game+ earlier would definitely benefit those looking for something a bit harder.

A game does not have to be challenging to be enjoyable, however. I would have loved Rain on Your Parade as a younger gamer, and as an adult the puzzling is a relaxing experience. The handcrafted world is beautifully rendered and never ceases to be charming. Cloudy himself is made out of cardboard, hanging from the ceiling by fishing line, and the denizens of the world are all wood, felt, and woollen creations. Each level completed with optional objectives awards an accessory for Cloudy to wear, giving him top hats, cute animals, or anime hair to dress up with. Players can draw their own face for Cloudy too, although I think the default was much nicer than my messy creation. The music is bright and cheerful, shifting to various dramatic tones depending on the events of the level. A zombie level’s music is presented like an old film, perfect with its classic sci-fi tones.