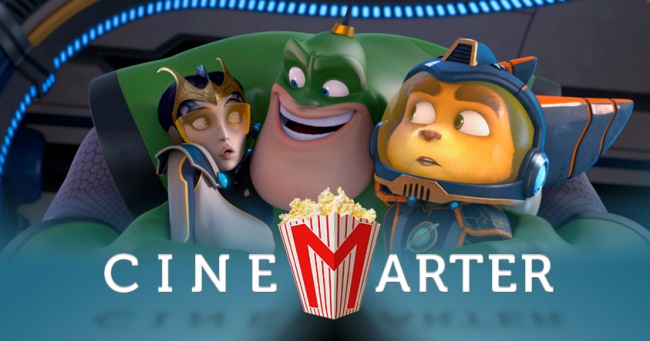 Spanning over a dozen titles and now on its third console generation, the Ratchet & Clank video game franchise is one of the more successful Sony-exclusive series ever, and it doesn’t appear to be slowing down. With a reboot recently released, and a feature-length movie tie-in dumped into theaters, it would seem as if both Ratchet and Clank will be around for many years to come – just as long as the quality of the film isn’t in any way indicative of the direction in which the franchise is heading.

The film is an abbreviated retelling of the story found in the new game, which itself is a reboot that tells the story of how Ratchet (voice of James Arnold Taylor), a lombax, met Clank (David Kaye), a tiny robot. A lombax is an orange cat-raccoon-type thing, and Ratchet is a mechanic with a thirst for adventure. Some villains are blowing up planets, so Ratchet and his newfound buddy Clank, after initially being rejected, join up with the Galactic Rangers – a group of heroes led by Captain Qwark (Jim Ward) – to stop them. 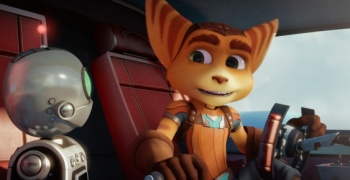 It’s an unbelievably simple plot that essentially tells you precisely why much of the movie doesn’t work. The games fall into the Pixar-type mold, meaning that they’re safe for children and sometimes have some very childish humor – the movie shares both of these aspects – but also contain more mature themes and jokes for the older people playing them. The movie is missing out on that latter section, for the most part. Maybe the filmmakers didn’t think that the older crowd would go to the movies to see an animated film. I don’t know. But the result is something that feels like a simplistic, watered-down version of the games.

Of course, the games also had a good number of jokes that didn’t land, but they had tight, enjoyable gameplay on which to fall back. The Ratchet & Clank games are platformers, while the movie skips out on that to do “storm the castle” missions a couple of times, which really should have only been used for the finale. Doing the “princess is in another castle” rug-pull works better in games than it does at the cinema; games are, typically speaking, more repetitive by nature in the first place. We also get a couple of montages, lots of shots of the villains being evil, one or two “twists” that won’t surprise anyone over the age of eight, and very little usage of Ratchet’s wrench, surprisingly.

Ratchet & Clank probably should have been a post-game extra found in the recently released game, not a theatrically released film.

It isn’t all bad, though. The voice cast is certainly up for the challenge. Many of the voice actors from the games return for the film: James Arnold Taylor, David Kaye, Jim Ward, and Armin Shimerman all fall comfortably into roles that they’ve played for a significant period of time. A strong Hollywood cast has also been assembled: Paul Giamatti plays the main villain, Chairman Drek, who wants to blow up planets and reassemble pieces into an ultimate planet for himself; John Goodman is a mechanic who took in an orphaned Ratchet; Sylvester Stallone – yes, really – is an evil robot who wants desperately to murder everyone – and especially murder Clank; and Bella Thorne and Rosario Dawson round out the rest of the Galactic Rangers.

I just wish the vocal cast was given something more to do. The writing is bland, and while there are some good jokes early on – and a couple more sprinkled throughout – most of them miss and are clearly aimed at the under-6s. There’s almost nothing to the characters – I can’t even name any of the new ones; that’s how little they register – and even our previously established individuals get so little to them that anyone who hasn’t played the games will identify them solely by their design. “The orange raccoon.” “The tiny robot.” “The green guy.” And that’s disappointing, because there is more to them, even if all we get here are brief and inconsistent motivations and maybe one brief monologued back story. The designs are crisp and technically proficient, too, but soulless and lacking in nuance and detail – especially for the new characters.

Ratchet & Clank is like one of those YouTube video compilations showing most of the cutscenes in a video game that some people put up for those who don’t like playing games and prefer just to watch for the story. But it feels like we’re missing 30 meaningful minutes of them, and the dialogue was re-dubbed to appeal to the pre-teens, losing almost all of the intelligence that appealed to the adults in the audience. It’s a simplified, watered-down version of the experience, aimed at the young kids who can’t figure out how to Press X to Not Die. Ratchet & Clank probably should have been a post-game extra found in the recently released game, not a theatrically released film.

Bottom Line: A weak retelling of a story told better in the video games, Ratchet & Clank is a disappointing entry in the long-running franchise.

Recommendation: Stick with the games.