As the ratings system of the largest videogames market in the world, the ESRB wields power far beyond its boundaries. These days any publisher who wants to make money on a major title needs it to shift units in the US, and therefore they have to play by the ESRB’s rules. ESRB categories are taken into consideration in every stage of a game’s design creation, from basic mechanic design to cut-scene dialogue. Producers and designers alike decide that this game will forego headshots and have blue blood to fit into the T category, or that another will have some alcohol and drugs references put in to ensure it hits the desired M.

The argument about the nature of content in videogames is therefore made very difficult by the existence of that one word: mature. If only the ESRB could have called it “Rated R”, or “17+”, or anything that does not result in a world where MadWorld is mature, but Ico, by definition, is not.

The vast, vast majority of the games the ESRB calls Mature are anything but. For an amusing 5-minute tour of the games industry, have a read through the descriptions and content descriptors of games rated Mature by the ESRB. Some highlights include:

“Red blood frequently splashes around game environments; chunks of bone and flesh sometimes splatter on the camera.” “Blood spray often explodes out of wounded enemies, while a slow motion effect allows players to see blood emission in a jelly-like, hanging form.” “The player’s character is depicted in a provocative outfit (e.g., bikini top and narrow thong), while cameras can be angled so as to zoom and pan across cleavage and posterior regions.”

Sounds like fun? Absolutely. Mature? Not so much. We are constantly bombarded by statistics that say that the average gamer is no longer a child. The ESA suggests that the current average age of a gamer in the US is 35 years of age – something I personally find very difficult to believe – but what we consider “mature” remains as it did when the ESRB was first born and Mortal Kombat‘s digitized open-heart surgery was the height of “maturity” in this industry.

We have made some strides since then, even if most of the games listed as “mature” on the ESRB’s list would have you believe otherwise. But it still seems like it’s impossible to have a realistic discussion about it. When a game like Six Days in Fallujah attracts attention for its very existence, it feels very much like we’re back in days of Night Trap and Lethal Enforcers – as if we’re pushing up once again at the limits of what videogames are “allowed” to do.

By basing a game not just on a real-life battle, but a controversial one, and furthermore touting stories about interviewing insurgents as part of the game’s development, Konami is courting controversy with Six Days, every bit as much as Mortal Kombat did. The game has made a name for itself before a controller has even been lifted in anger; some have already called for it to be banned.

It’s a valid question, and Eurogamer’s Rob Fahey does a decent job of fielding it in the Times. Much of the criticism coming from outside of the industry is, of course, a knee-jerk, uninformed response. But there have also been many within the industry to criticize the game also, so it is unfair to attribute the controversy as being merely “a consequence of [an] outdated viewpoint”, as Fahey attempts to.

While I highly doubt that Six Days in Fallujah will be the game to answer this question, it does raise an interesting point: are videogames only ever meant to be “fun”? 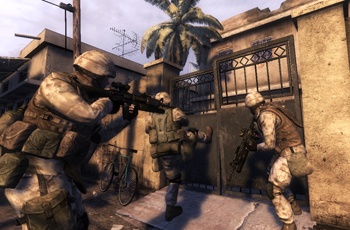 It was the first question many journalists asked of Konami and Atomic Games – will this game, which has alternatively already labeled itself as “survival horror,” something that will offer a “deeper level of understanding” and “just a game” – actually be fun? We play war games to enjoy ourselves – no question about it. One of the reasons Call of Duty 4 was such a success it that it does a great job of depicting “modern warfare” (or, at least, what we imagine modern warfare to be), but of far more importance is how well the game plays and how much fun it is to sit through.

Our opinion of any game rests immediately on that one question – is this fun? We are willing to overlook lousy stories, character design, dialogue and voice acting if the end result plays well. For all the time and money spent on graphics and sound, there are many willing to overlook those also if the gameplay is fun.

We often ask if a game can make you cry. Perhaps the next question should be, is it possible to make a good game that is not only not fun, it makes you feel bad? A good game that’s just no fun at all, or is for long periods of time painful to sit through because of what it shows you or requires you to do?

This is where the valid criticism of Six Days comes from. To reduce the events of a battle still fresh in the mind, one in which thousands were killed, to the tea-bagging, fist-pumping level of Halo would be a crass, cynical move. And if reports of a regenerating health system and other standard FPS tricks are true, that’s exactly what Six Days will be. For it to succeed in its stated aim, it would need to be as un-enjoyable to play as a movie about the same events would be to watch. Instead, it seems likely to be the equivalent of a Michael Bay blockbuster about the same subject – and that is certainly that would be in bad taste. But could a game that is not enjoyable ever succeed?

As we get older, along with developing tastes for things that most children hate – wine, avocado, foie gras – we learn to appreciate types of media that children do not. I distinctly remember hating the TV news until I was about ten or so. Now I, like most people I know, are news junkies, pulling in news from a hundred different sources a day. So is it inconceivable to think that our gaming tastes should change too? Or should that games that I play now all follow the same rules as the first game I fell in love with, Super Mario Bros? Is good gaming universal? Until recently I would have said yes. Now I’m not so sure.

I don’t ever expect this kind of game to get made – at least, not in the form of a big-budget blockbuster that Six Days aims to be. Budgets are too high, and the indie gaming audience willing to sit through such experiments doesn’t exist in the numbers it would take to support such a project. An experimental version of the Lord of the Rings movies would be just as impossible.

And already Konami seem like it’s trying to backtrack, perhaps being taken aback by how far the controversy has extended beyond the games world. Indeed, Marketing VP Anthony Crouts has already stated that Konami is “not trying to make people feel uncomfortable. We just want to bring a compelling entertainment experience. At the end of the day, it’s just a game.”

But despite this, I actually have to grudgingly admire Atomic Games and Konami for what they’re doing. Sure, it’s a cynical ploy to gather publicity for what would otherwise be just another military shooter, but in an industry that often goes out of its way to play things safe, a little controversy over something other than sex and ultra-violence is no bad thing.

If nothing else, it has opened up this new area of conversation amongst non-gamers, and forced both them and us to think about what exactly a game can be – an entirely unintended consequence, I have no doubt, but more than most games can hope to accomplish in a lifetime.

Christian Ward works for a major publisher, and must admit that he still does not particularly enjoy wine, avocado or foie gras.