The Razer BlackWidow isn’t a new keyboard – it originally launched in 2010. If you’re into high-end gaming hardware, you’ve probably at least looked at one, if not tried it out. But there’s a new version of Razer’s long-running mechanical: the BlackWidow Chroma V2. 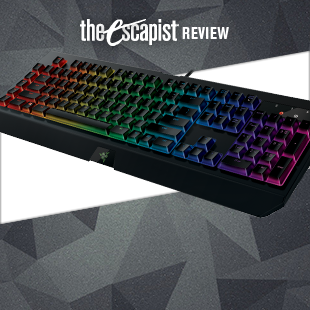 The V2 is available with three different switches, all manufactured by Razer. My review unit uses the Razer Green switches, which feature an audible click and a tactile bump, much like a Cherry MX Blue. There’s also the Razer Orange, which has the tactile bump but not the click, and the new Razer Yellow that’s mechanical without the click or the tactile bump. The new Yellow switch is designed with a reduced travel distance that Razer says “allows keys to be pressed faster than ever before.” All of the switches are rated for 80 million keystrokes, which Razer says is “the highest mark amongst current generation mechanical switches.”

The newest BlackWidow will certainly look familiar if you’ve seen any of its predecessors. While it’s not a huge keyboard, it does work in a full numpad on the right and a row of five programmable macro keys on the left. You’ll also notice that there’s a USB 2.0 passthrough port on the right side of the keyboard, as well as a headphone jack. Of course, this means that the other end of the seven-foot braided cable has two USB plugs and a headset plug as well, so you’ll want to make sure you have enough free ports for those features.

Another new addition to this keyboard is a wrist rest that’s very similar to the one included with the Razer Ornata Chroma that we reviewed last month. It’s got a leather-like surface with some nice padding, and it attaches magnetically to the keyboard. It seems to be even softer than the one I liked so much on the Ornata, and the magnets seem more powerful as well.

Overall, the look of the Blackwidow Chroma V2 is kind of minimalist, much like the Ornata before it. There’s not a lot of flashiness here, just a smooth black finish that looks great. That is, until you plug the thing in and all the lights come on.

As the name would suggest, the V2 includes Razer’s Chroma lighting technology. That means you can choose from a number of preset patterns, like simulated fire, starfields, or even waves of shifting colors. You can also set up your own lighting profiles, which is surprisingly easy in Razer’s Synapse software, and you can easily sync the profiles you create to all your Chroma-enabled devices. While you’re in the software, you can also reprogram every key on the keyboard to do whatever you like. Sure, there are the five dedicated macro keys, but if you want to rearrange your keyboard, you’ve got that power.

While I really like gaming with the BlackWidow Chroma V2, if this is going to be your main keyboard, be forewarned: this thing is LOUD. The Razer Green switches have an audible click, and it’s one of, if not the, loudest mechanical keyboards I have ever used. Typing on it is an event for anyone that’s nearby to share in, so if that’s an issue, you might want to look into the Orange or Yellow switches instead. That said, typing on it does feel good, and the keys register your presses exactly where you’d expect.

The Blackwidow Chroma V2 is a solid, all-around gaming keyboard that’s got all the features to recommend it. If you already own one, you’d be mostly buying an updated version with a snazzy wrist rest, but if you’re OK with that, you won’t be let down by its performance. It’s a bit pricey at $169.99, but if you’re in the market for a high-end mechanical keyboard with customizable lighting, the Blackwidow Chroma V2 is definitely worth your consideration.

Bottom Line: The Blackwidow Chroma V2 is a solid gaming keyboard that offers all the options you could ask for. As a bonus, it’s just as nice to type on as it is to game on.

Recommendation: If you’re in the market for a mechanical gaming keyboard and you’re a Razer fan, this is the Cadillac of the line. I’d recommend it to anyone who wants a high-end keyboard with all the bells and whistles, unless you already own the Blackwidow Chroma.