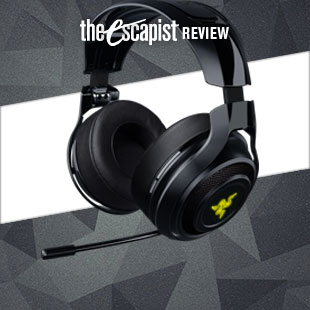 The Man O’War 7.1 looks and feels like a high-end headset. The first thing that strikes you when you pull the Man O’War out of the box is how comfortable it looks, and that feeling is only enhanced when you put it on your head for the first time. The wide headband is well padded, and the circumaural ear cups comfortably surround your ears, keeping unwanted sounds out, and game sounds in. Even in long gaming sessions, it never feels uncomfortable, although the leather-like material can cause a bit of sweating if you’re in a warm environment. If you’ve got a small head, this headset might be a bit big on you, but if you’ve always wanted a headset that was comfortable for folks with larger heads, this is it.

The look of the Man O’War 7.1 is plain, especially in comparison to some gaming headsets. There are no bright lights, LEDs, or other garish highlights. The Razer logo is in black on the outside of the earcup, and the whole headset is an attractive matte black. Its construction is largely of plastic, but the headset feels sturdy in your hands and on your head. It features a four-and-a-half foot attached cord, with a five foot extension in the box, so you’ve got plenty of slack to fit it into almost any setup.

While the Man O’War makes for an attractive piece of hardware, almost all you care about with a headset is how it performs, and the Man O’War offers up solid sound inside its attractive package. Sound quality is superb, with music, voice, and game sounds all reproduced clearly and accurately. The highs are clear, and the bass is strong, but not overpowering. Everything sounds crisp, with almost no hissing or background noise.

The 7.1 surround sound works spectacularly well. Configuring the surround for your personal preference is easy using Razer’s Synapse software, which breaks the sound up into individually configurable zones. Once you’ve got it right, you’ll have no trouble locating that soldier who’s running by you in Battlefield 1, or keeping tabs on what’s around you in Dishonored 2. It’s some of the best sound I’ve found in a headset.

Unfortunately, that great sound is paired with a microphone that leaves much to be desired. The microphone is found on the left earcup, and can be pulled out and positioned as you prefer. But no matter which program I tested it with, my voice was muffled, with noticeable background noise. In test chats with other staffers here at The Escapist, I was told that they heard similar issues. The sound quality is still good enough for voice chat in while gaming, but I would not recommend this microphone if you’re hoping to do any streaming or podcasting with your headset.

You can pick up the Man O’War 7.1 for $119.99, bringing this headset in 50 dollars cheaper than its wireless sibling. It’s a bit pricey for a wired headset, but the sound quality is top-of-the-line. It’s just a shame that the mic falls a little flat. Still, if all you’re using it for is voice chat, you’ll be pleased with this headset.

Bottom Line: The Razer Man O’War 7.1 offers up some of the best sound quality that you’ll find a gaming headset. As long as you aren’t planning to do any serious recording, streaming, or broadcasting with the mic, you’ll love this headset.

Recommendation: This is a great headset for anyone who’s more interested in playing games than talking about them. The sound quality is just that good.