This article is the first in a continuing series in which we will go back and review some of the most iconic anime of all time. With the passage of time, often our nostalgia can blind us to the merits, or faults, of beloved, and sometimes dreaded, anime. Through this series I plan to take an objective look at these anime so that those who might be interested have a reference point before they devote their time to a show or film. In order to be considered for these reviews, the anime in question must be at least 15 years old. The final rating of the show will be based on five components: story, visuals & animation, voice acting, music, and lasting impressions. I hope this series will be a guiding light to those who have an interest in the history of animation, or are even just big fans of a certain era of anime. If you have any suggestions for what series I should cover next, or just want to discuss your favorite anime, sound off in the comments below! 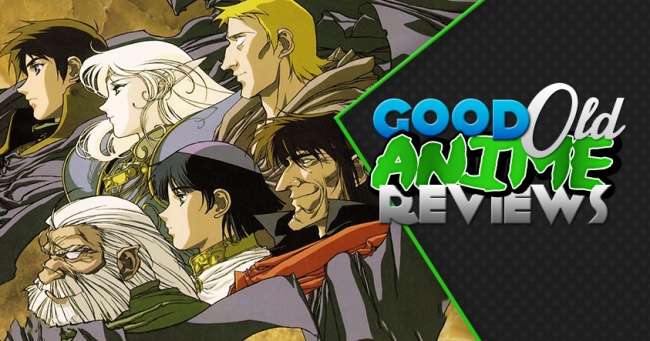 Record of Lodoss War originally began as a series of Dungeons and Dragons replays in Comtiq magazine. Not long after the initial debut of those replays, avid fan and dungeon master Ryo Mizuno began writing novels, which eventually led to the creation of a game that was separate from Dungeons and Dragons, with all new rules and material gleaned from Mizuno’s novels. These new campaigns spiraled into the transmedia franchise that Record of Lodoss War is today, featuring several anime, video game, and manga adaptations. The anime we will be focusing on today is the original thirteen episode OVA simply titled Record of Lodoss War.

At the end of the era of the gods, a massive war was fought between the light and the dark. Their battle ravaged the world, but its destruction led to the creation of the Island of Lodoss, the setting of the OVA. The story of the Record of Lodoss War OVA loosely follows the plot of the first, third, and fourth books of Mizuno’s novels, following the adventures of the aspiring knight Parn and Deelit, the only elf born in 1,000 years. Often traveling with them is the Priest Etoh, the dwarf Ghim, the wizard Slayn, and the rogue Woodchuck. Together, they make your typical cast of D&D characters, with matching abilities to boot. Besides a minor subplot with Ghim, there is relatively no character development outside of Parn and Deedlit, making most characters a placeholder for whatever archetype they need to fill.

The overall plot of the OVA is fairly typical fantasy story: an evil witch seeks to revive ancient powers lurking within Lodoss and the heroes must rush to save the island from her magic. An evil wizard also steps forward and looks to take the witch’s place by any means necessary. Record‘s standard fantasy story doesn’t try to push its genre in any new directions by playing it very safe, but this turns out to be one of the show’s strengths. Since the plot remains very simple and follows the archetypal D&D schema for fantasy adventure, the OVA is fun and doesn’t ask much out of its audience. With that being said, viewers who want a little more of a cerebral experience might want to look elsewhere, as the most complex character development within the show is mainly the “will they, won’t they” between Parn and Deedlit.

At the beginning of the show, Parn and Deedlit meet and, although in agreement to travel together, often bicker amongst each other, typical behavior for potential love interests in anime. As the series progresses, the pair eventually do fall in love, but it happens over the course of the show slowly and subtly through rare scenes when the action dies down. These scenes are never obtrusive and are frankly refreshing, as they don’t feel as contrived as most anime love scenes. By the end of the series, having Parn and Deedlit become lovers makes sense within their trajectory of character development and also never becomes the central focus of the plot. Despite an attempt to develop a few characters, such as the King, Emperor Beld (AKA GANONDORF), and the Lord Ashram, a powerful dark warrior, the relationship between Parn and Deedlit is really the only fleshed out subplot. Overall, the story tries nothing new and has little character development among its cast, but is fun based on its simplicity alone.

Speaking of simplicity, Record‘s animation is quite basic. Often, I could count the number of frames I was looking at because there is not a lot of movement ever on screen. This makes the show appear a lot older than it actually is. While watching, I could not help but think of Thundercats, which ended the year before Record aired, but this doesn’t mean the show was awful to look at. Even though the animation suffers from a lot of cut corners, the art of the series is highly detailed and distinct. When watching an anime, I always like to perform a test to see if I can visualize other people or creatures in the art style of the show, if I can, then I consider the shows art direction strong enough to warrant a highly detailed world. Record excels in this area, as each character design, although different, seemed to fit in with the others in the show.

The environments, however, are severely lacking. While the characters, castles, and weapons are heavily detailed, the background environments suffer. Maybe I am spoiled, but when watching something in the Fantasy genre, I expect imaginative backgrounds to match the characters and objects inhabiting the story. Instead, Record opts to have low detail backgrounds, and when scenes are zoomed out, there is usually no animation to fill that void. While this may seem to be a minimal problem, the lack of background detail and poor animation paired with the impressive art style of the characters and items just doesn’t feel right and the show takes a hit for it.

The voice acting is also a feature that suffers throughout the production. No single performance stands out and although the voices “match” their character, there is nothing compelling about their performance. Although I am used to bad voice acting because of shows like He-Man, it still stings when you enjoy the plot of a show, but are forced to listen to subpar voice acting for the better part of six and a half hours. While it may just be a product of its age, Record of Lodoss War‘s voice acting is certainly nothing to write home about.

On the other hand, the music is fun and catchy. The soundtrack is not very long, nor diverse, and you will begin to predict when certain pieces of music will be used, but frankly, it grows on you. The music is strong enough to establish itself at the beginning and maintain a consistent tone throughout the show, despite the poor voice acting and animation. This is one of the highlights of the entire series, as music can often make or break an anime for me. In this case, each mood or tone the show attempts to establish is supported by the score. The opening and closing themes are also iconic, most notably the opening credits. Upon my first viewing I was so excited to experience the Island of Lodoss because of the imaginative spectacle of the opening song, despite all of its 90s campiness. I mean, just look at that dragon:

There is no doubt that this show is beginning to show its age, as its poor animation and voice acting are a testament to, but despite all of that, Record of Lodoss War redeems itself through a commitment to the fantasy tradition and the flame of nostalgia it conjures. Often people complain that older fantasy doesn’t test the waters enough to be as interesting as what is out today, but we often forget that without these archetypal forms of fantasy, we wouldn’t have tropes to defy in the first place. There is a reason that Record of Lodoss War is still around today through tabletop media and video games, and that’s because it tells a simple, classic story of good vs. evil in a fun and stylish fantasy world. It wasn’t trying to create anything new or challenging, and sometimes, in the case of fantasy, that’s a-okay. The world, further built by the multitude of Lodoss media, is a comfortable fantasy world that deep, deep down we can’t help but love.

If you liked The Lord of the Rings, The Chronicles of Narnia, or are simply a fan of fantasy, Record of Lodoss War is perfect. For anime fans, the show may seem a little rough around the edges, but has enough charm to really become its own, even if it doesn’t challenge any of our preconceptions about the genre. Even though the cheese is pretty thick, Record of Lodoss War is a fun nostalgia trip and an even more exciting fantasy world that I would recommend everyone try out at least once. Plus, if you look forward to the fantasy anime of today, such as The Seven Deadly Sins, or Fullmetal Alchemist: Brotherhood, you can definitely feel the legacy Record establish. While it might not be everyone’s cup of tea, Record of Lodoss War is a great foundation for fans of fantasy anime, and should be essential viewing for anyone that enjoys elves, orcs, and dragons.