Last week marked the 10th anniversary of the theatrical release of Hostel by Eli Roth, one of the more controversial horror movies of all time and a personal favorite. For those still unfamiliar with the movie (SPOILER ALERT) Hostel follows two college students, Paxton (Jay Hernandez) and Josh (Derek Richardson), as they backpack through Europe with their Icelandic friend Oli. The trio journeys deep into Slovakia after hearing about a hostel in a remote town full of gorgeous, horny girls who love to party and have sex with Americans. The hapless group quickly fall prey to unscrupulous captors who drag them to an abandoned warehouse where they sell the terrified young men to wealthy businessmen and other assorted sociopaths from around the world who then torture and kill them for fun.

The trailers leading up to the release billed the movie as “inspired by true events” which continues to make many horror fans who’ve seen it wonder if there really is a place in Slovakia where Americans are kidnapped and murdered for sport. When asked about it in promotional interviews director Eli Roth claimed that he stumbled across a Thai website advertised a “murder vacation” – offering users the unique opportunity to torture and kill someone for a mere $10,000. Roth insists that videos of a man walking into a room and shooting someone in the head were posted online as well. The director originally planned on turning what he found into a documentary but he quickly changed his mind after realizing he was putting himself in grave danger even researching the subject. Still Roth claims he was so fascinated by the morbid idea that he showed the site to Quentin Tarantino and that the two later developed the idea for the film. Tarantino and Roth both insist that they have no idea if the website was real or not.

In the end Europe was chosen as the perfect setting for the film, rather than Thailand, because of its popularity with backpackers and college students and its association with the unknown and exotic for geographically-challenged American audiences. Czech Republic and Slovakian governments denounced the film upon its release for the way it portrayed their countries as undeveloped, poor, and uncultured lands suffering from high criminality, war, and prostitution. Fearing it would “damage the good reputation of Slovakia” and hurt tourism they invited the director on an all-expenses-paid trip so he could see it is not made up of run-down factories, ghettos, and kids who kill for bubble gum. Defending himself, Roth argued that despite the many films in The Texas Chainsaw Massacre series, people still travel to Texas.

Roth, whose only previous work was a slasher called Cabin Fever, poured his heart into the project, using the closed wing of functioning mental hospital in Prague and 150 gallons of blood to bring his vision of a killing floor graphically to life. The location couldn’t have been more perfect. In fact, the basement of the building where many scenes were shot was so creepy that the director hired a string quartet playing classical music during filming to make the cast and crew feel more comfortable. Roth used crew members as extras and hired locals to play bit parts, saving money wherever he could while still maintaining a realistic feel. In the end the film cost less than $5 million to make but pulled in a whopping $81 million worldwide, making it a huge success for Lionsgate. It knocked The Chronicles of Narnia: The Lion, the Witch, and the Wardrobe out of the top spot both at the box office, and again later when it was released on DVD, despite the production budget of the popular kid’s movie being nearly 50 times bigger. It was followed by a far superior sequel (in fact it’s best to watch both together in my humble opinion) and later with a barely palatable third installment set in Las Vegas that brought the series effectively to an end. 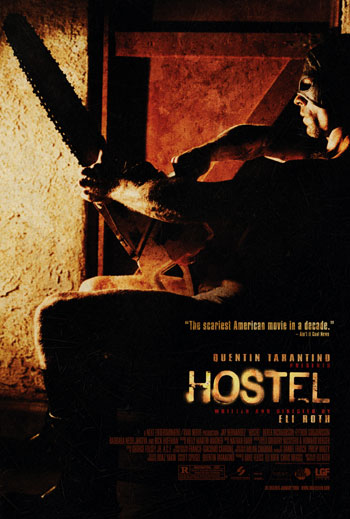 Okay. So now you know about Hostel. But to really understand the importance of this movie and why it was so popular you have to understand the period of history that spawned it. A decade ago, before the onset of the economic crash, American culture was still struggling to come to terms with the idea that no one was ever really safe in a post 9/11 world. For many Americans it was a shock finding out they were hated by most of the rest of the world, and since they didn’t understand why they grew even more isolated and xenophobic. This new paranoia, along with America’s growing taste for sadism, was adequately reflected in the horror cinema of the time, which found itself surrealistically competing with a steady stream of real world horror being flashed onto our screens from cable news channels in an endless twenty-four-hour news cycle. From images of the Twin Towers crumbling to the atrocities of war to the gleeful human debasement at Abu Ghraib, Americans had become increasingly desensitized and harder to shock. Hostel did just that.

In 2006 while the SAW franchise was happily firing off sequels and the Final Destination series was similarly raking it in with mind-numbing gore that left audiences shocked speechless along came Hostel, the movie that would spawn the term that defined all such movies as “torture porn” thanks to critic David Edelstein’s infamous review. Going to places slasher films only dreamed of, movies like Hostel became a means of cultural catharsis for many, allowing them an outlet for their fear and anger in the form of extreme violence and unspeakably monstrous cruelty. But unlike similar movies in the subgenre, which typically glorified the unlikely death of the young and attractive for shock value, Hostel took things to a far darker by including consumerism and anti-American sentiment.

The terrifying possibility of something like this really happening, coupled with the sheer brutality of the movie caught many audience members totally off guard, particularly those who’d been lured in by the heavily-marketed catch phrase “Quentin Tarantino presents” from the commercials and billboards. At the first screening of the film at the 2005 Toronto Film Festival two ambulances were called due to people having such extreme reactions to the movies contents. During Paxton’s torture scene a female viewer experienced such tightness of the chest that she thought she was having a heart attack and called 911. At the same time a man watching was so overwhelmed that he fled the theater, fainted and tumbled down the escalator. Though dismissed by critics as a publicity stunt the director insists both reactions were genuine, and anyone who has seen the film is likely to believe him. It is one of the most difficult scenes you’ll ever watch in a horror movie, hands down.

Having traveled around Europe alone not once but twice, in 2003 and again in 2006 I found the movie absolutely terrifying beyond words. Luckily I didn’t see Hostel until I was already back home safe, or the nights I spent wandering the streets and bars in Amsterdam and Budapest might have been much scarier. I recently watched all of the Hostel series for the 31 Nights of Horror challenge – and am happy to say it still packs the same visceral and terrifying punch it did when it was first released. I highly recommend that you make time to watch them all again, preferably in a row.