GameStop is a great place to visit. I sometimes make a game out of watching underage children convince their parents to purchase M-rated games. It’s a never-ending drama: Kid wants Modern Warfare 2. Parent reads the box and decides that her child isn’t ready to gun down innocent Russian commuters. Kid whines, then begs, then throws a tantrum. Parent caves, and kid shows up on Xbox Live a few hours later slinging racial epithets and questioning other players’ sexuality. But the real reason I visit GameStop is to pilfer games from the trade-in section.

I don’t really consider it stealing. After all, GameStop is famous for buying second-hand games cheap and marking them up to nearly the full retail price. I know robbing from corporate scammers is shaky moral ground, but, look at it this way: Countless anonymous pirates steal games with a couple clicks. At least I put some effort into my questionable moral choices.

It was while pawing through discarded copies of Borderlands and Godfather II that I ran into Gil Borgst, a kid I knew from high school. He was very happy to find me there, because he needed my help finding a game suitable for his 11-year-old daughter.

Truth be told, I don’t particularly like Gil. He was the school narc – he tipped off the teachers to the cigarette stash in my locker and whenever I skipped shop class he’d remind Mr. Wright that I wasn’t there. If we were in prison together, I would have shanked him in the shower with a sharpened toothbrush.

Time would have eased my hatred if he had not interrupted my afterschool make-out session with Molly Hefner by calling the school nurse to our location behind the bleachers in the gym. Thanks to Gil, a moment that should have been a glorious coming-of-age ceremony turned into an hour-long lecture on STDs. I don’t think I ever forgave Gil for f**king up my one shot with Molly.

He was in my world now. Gil had no idea what he was doing. He was in a store surrounded by boxes covered in space marines, cryptic symbols and androgynous anime characters. I wasn’t surprised that he felt overwhelmed. I imagine it was much the same way I felt that time I stumbled drunkenly into the Oprah Store in Chicago at closing time – except no one was going to pepper-spray him for trying on the Chenille toe socks.

I told Gil the game Dante’s Inferno would appeal to his child. He was dubious at first, but I assured him that it would be a good chance to introduce his daughter to classic literature. Had Gil actually bothered to read the box, he might have noticed the ESRB rating of “M for Mature” and foiled my plans for revenge, but luckily he didn’t. Even better, Gil’s purchase offered enough of a distraction for me to stuff MadWorld into the pocket of my lucky shoplifting cargo pants. 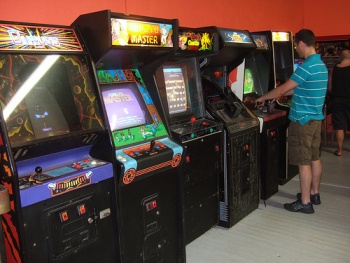 Gil’s excessively lax parenting got me thinking about my own childhood experiences with games. My mother was extremely overprotective, which made it nearly impossible to enjoy gaming. It all started when my sister Mary Anne got knocked-up in the back of some scummy college guy’s Buick. (My mother blamed Satan, but maybe if hadn’t discouraged any sort of discussion about sex Mary Anne would have thought twice before going all the way with a guy whose only qualification as a father was that his Buick was big enough to bone in.) Somehow that failure made her focus more on what I was doing, and what I was doing was mostly playing games.

It wasn’t that my mom was dumb – after all, she had been on the dean’s list in college. It was just she was just easily scared by things she didn’t understand. After an exposé about the dangers of videogames on the local news, Mom outright banned videogames from our house. She was determined to keep her two remaining “innocents” from falling under the influence of what she considered “mind-controlling substance.”

Her over-reaction didn’t stop there. While taking care of Mary’s baby, she would meet with her church group and protest outside the local arcade. Arguably the arcade did more to keep kids off the street than the church’s own youth knitting and gardening programs ever did. After a day of knitting and gardening with my mom, all I wanted to do was run down to the Arcade or stab someone with a knitting needle..

I caught her following me there on numerous occasions. I was usually able to lose her, but eventually I grew complacent and didn’t take my usual precautions; instead, I walked directly from my house to the arcade on a Sunday after church. When she caught me, she literally dragged me out by my ear in front of my friends and gawking passers-by, all the while begging Christ to save her poor son from Satan.

I don’t want you to think my mother was all bad. She had a lot of crap to deal with: A delinquent Mary Anne, a husband who became increasingly interested in Civil War dioramas at the expense of his personal hygiene, two teenagers, a baby and countless other things thing’s that all mothers deal with. But that doesn’t change the fact that her parenting strategies were pretty terrible.

My mother’s plan was to protect her children by doubting their maturity, disallowing them to formulate their own opinions and denying them opportunities to be exposed to the world outside of her own narrow scope of experience. Every time I get drunk and shoplift at a GameStop, I am amazed at how successful her plan was.

Final Fantasy XIII Developers Would Like to Make Sequel