After all that, I find myself left with a strange, double-edged fondness for Remember Me, the same way I think of games like Alone in the Dark and Mirror’s Edge. Games that at the very least try to make the most of some clever ideas, but cock them up adorably. Remember Me is just trying to do too many things: the memory alteration mechanic, the custom combos, and the attempts to meet the standard triple-A model halfway.

I do like the game’s custom combos for reminding me of God Hand, the likes of which I don’t think we’ll ever see again in triple-A. It, too, had customisable combos, but made more of an effort to focus on the concept with a massive variety of punches and kicks and combat challenges. It was also quite a funny game, and knew how to be hilariously over-the-top without being all about ‘ironic’ excessive violence and gore. It was nice back then, wasn’t it, when not every single triple-A release felt like it had to be about the gritty post-apocalypse or the overthrow of tyrannical regimes, and take itself so effing seriously all the bloody time.

Remember Me reminds me (arf) of what my high school gym teacher told us when our PE lesson was taking place in the ‘fitness suite’ where all the weight machines and treadmills were. He said there’s nothing to be gained from wandering around the room going “Ooh I’ll have a quick go on this machine and then on this and then on this.” You need to sit down and commit yourself to a few sets or you’re never going to grow. And that’s Remember Me‘s problem: too many ideas that it toys with a little and then moves onto the next. So the number of different moves you can unlock and combos you can create are severely limited. And the really interesting concept, the ability to edit the memories of other characters, is not explored to the full.

Here’s how it manifests. At a few determined points in the plot, Nilin can do a weird little gesture at the back of a villainous character’s neck and the action shifts to a playback of the event that defined that character and turned them into bitter, hate-filled scumbags (because it’s only ever one shattering moment that does that and never a continuous stream of niggling misfortune or the entirety of a poor upbringing but shut up, just roll with it). The task is to change the memory, and in doing so, make the subject a better person. Essentially we scan back and forth through a rendered cutscene and slightly move the states and positions of small objects in order to cause the event to play out differently.

You do this a total of about four times throughout the game. But I don’t think it’s particularly helpful to say that just making a few more would’ve helped. It doesn’t seem like the sequences would’ve been easy to make. The developers needed to write them, voice them, create assets, animate the assets, and do all that for every possible outcome that can be created from the rearrangement of the interactable bits (many of which are red herrings, which I’m thankful for, because it raises the minigame above the usual unfailable ‘press X to continue’ gameplay that blights gaming culture). While more of these sequences would certainly have been welcome, I still wouldn’t consider the game to have fully explored the premise.

Take a step back and consider where else the ability to rewrite people’s memories could apply to the gameplay. Think more in terms of organic gameplay to be used on the fly, during combat, upon standard enemies, rather than in pre-baked inorganic interludes. Here’s what I came up with. 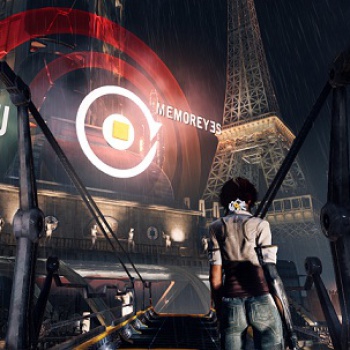 First add a stealth element. I know stealthing as a mechanic is getting rather a lot of airtime in triple-A games lately, but that’s no bad thing. And games embracing nonviolent gameplay still don’t equal the number of ones encouraging it. But anyway, we switch up the gameplay to Nilin trying to avoid confrontation if possible, which makes sense, ‘cos at the start of the game she staggers out of oppressive future prison where she underwent mistreatment to the point that she can barely stand, and you can’t just walk that off.

So, we add stealth, and then like many stealth games we need a distraction mechanic. Most stealth games use something like throwing something noisy to make a guard look the other way, but the concept of memory implantation is tailor made for such a service, as well as for immediately pacifying a guard who has spotted us and is attempting to attack.

We give the player character the ability to make that weird Jedi hand gesture at any random guard, at which point we go into the guard’s recent memories. From the player’s perspective, they and all other entities in the room are moved to wherever they were thirty seconds ago and some kind of filter (black and white, maybe) is added to illustrate that we are no longer in the real world, but the world as the guard remembers it.

At this point, there are many different possibilities. We could, for example, run straight up to the guard and allow them to shoot or beat us to death. Then we cut back to reality, and assuming we aren’t in plain sight by the time the guard recovers from the memory implant, they will remember having killed us, and will go back to being passive and unaware. Alternatively, in the false memory, we could alert the guard and run to some distant location, so that when we return to reality, the guard will go there to find us. Maybe we set up a trap there earlier that the guard will now stumble into. Thirdly, we could simply kill the guard inside their own memories. This leaves them in a temporary state of existential uncertainty, creating the same effect as a stun attack.

We could even have a secondary special ability that allows us to assume the appearance of one of the other guards while inside the false memory, which adds a whole new suite of effects. We start shooting the guard whose memories we’re rewriting, return to reality, and the guard will start pre-emptively shooting their allies. Or we do something that tricks the guard into thinking they killed us, which will leave them stunned and guilt-ridden until they see that their ally is, in fact, still alive. But if we’re really clever perhaps we can sneak around and kill that ally before that happens, and leave the body where the first guard can see it. So the guard assumes they were responsible and shoots themselves.

Now, this all rubs up against the ethical problem with violating people’s minds to destroy their sense of self, the same one that Remember Me toys with and then forgets about as with so many other things, but I guess if we all got over the shooting people to death thing, then it’s a small potato to stomach. You didn’t even bat an eyelid reading that sentence, did you? Why are you such a terrible person?