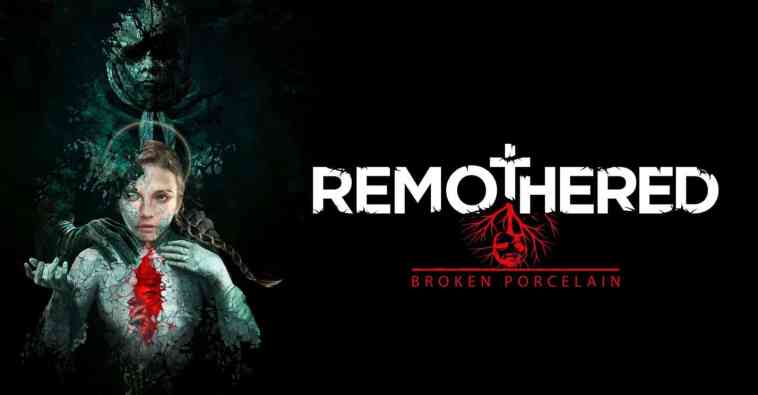 It was just a month ago that I previewed Remothered: Broken Porcelain. A limited hands-on session with the game had left me hopeful that it would feel like the proper kickoff to spooky season. Thus, I consciously forgave some issues I saw at the time, as I understood there was more work to be done and more time to fix things. Unfortunately, at launch, it’s quickly evident that developer Stormind Games could’ve used even more time with this game — it’s not just the porcelain that’s broken here.

Remothered: Broken Porcelain is the direct sequel to 2018’s Remothered: Tormented Fathers and follows closely in its predecessor’s footsteps in several marquee ways. Chief among these similarities is the sequel’s overarching messiness. At launch, Broken Porcelain displays a number of issues ranging from mildly annoying, like an inconsistent audio mix and cutscenes that seem cut off just slightly, to major progress stoppers like faulty enemy AI and a consistent clunkiness in exploration and survival.

Remothered is interesting in that it coalesces two worlds of horror games. From the old school, it tasks players with finding curious objects and a constant stream of keys to advance beyond the many locked doors of Broken Porcelain’s Ashmann Inn. From the more modern genre games, it borrows a nearly defenseless protagonist whose best course of survival is often to run and hide. Unfortunately, keeping a foot in both universes isn’t so well executed across the full game.

Consistently, Remothered: Broken Porcelain is undone by a lack of polish. For instance, you can scavenge for crucial items such as knives or bottles that can be used to distract the game’s “Stalkers” or get you out of a jam should they grapple you. It is left to the player to scavenge but strongly encouraged, sometimes even mandatory if you’re going to defeat some enemies. But the would-be simple act of opening various cabinets and dressers is so clunky. It’s far too easy to open the wrong drawer or close one instead of opening another. Even knowing what you’re picking up once you have a drawer opened is a tricky affair. Making this worse, you can only hold one defensive weapon at a time, and even though you may have upgraded it, picking up a new weapon will cause the one you’ve dropped to disappear. This seems to be a bug, and it’s not alone.

In one mid-game sequence, I needed to defeat the latest Stalker. The chase began in a small room and he had a gun. The game instructed me to get to a fire extinguisher and then gave me control. From there, a bevy of issues flared up across many attempts. Most often, the Stalker would close the distance on me, stun me once with a melee hit, then shoot me several times before I regained control, stuck in a locked animation from the initial blow. When I did get around him, the extinguisher would prove so ineffective that I didn’t understand its utility, so quickly I decided to just exit the room and hide elsewhere. In those tries, he would often know exactly where I was even though he hadn’t seemed to see or hear where I went, or if I did lose him, he would briskly search upstairs so quickly that it seemed much too hard to give chase while crouching to maintain stealth. 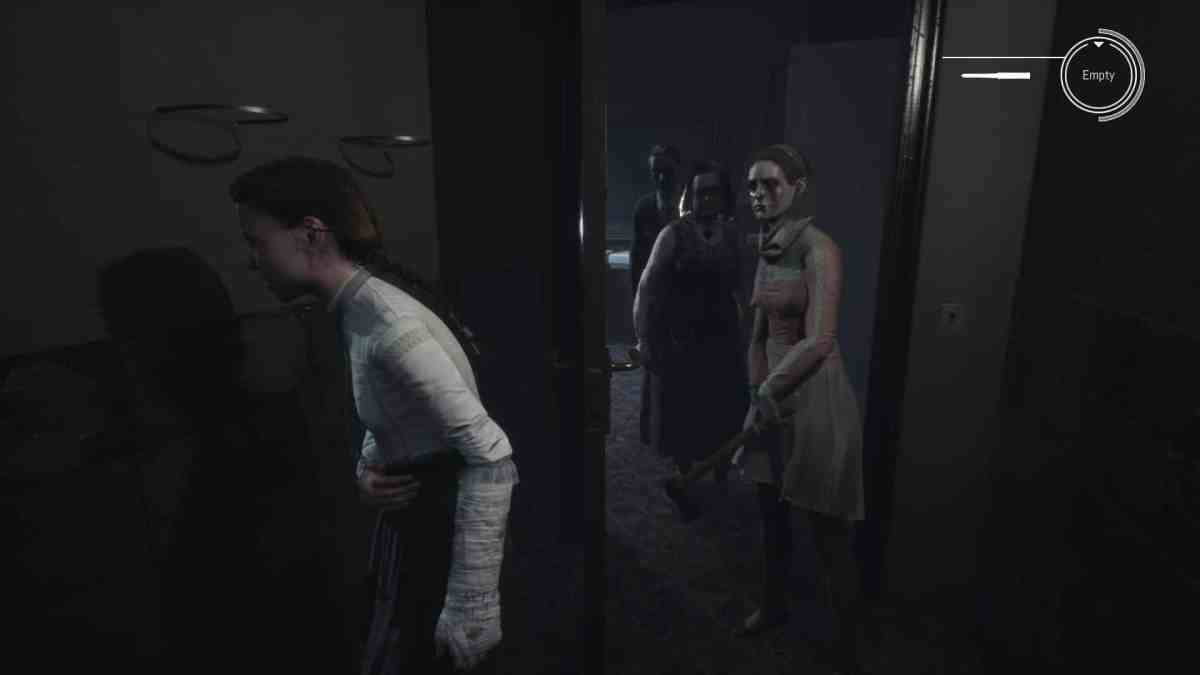 In the most damning of all of these attempts, I got out of the first room and hid successfully, but when I gave chase, a new bug prevented me from standing up. This meant I couldn’t easily scavenge for more items; although, I was also strangely able to crouch at sprinting speed but keep my silent footsteps. This allowed me to finish off the Stalker four times, but he refused to die. Eventually he got the better of me, only for the game to advance to the next cutscene like it was apparently supposed to do several stabbings ago.

The entire game behaves like this, and the one saving grace of these broken sequences is that they aren’t always present. Playing Remothered: Broken Porcelain feels like a coin flip. You can get lucky and have a mosty bug-free session, or you can hit something so game-breaking that you feel your save data is suddenly invalid.

It’s too bad because, like the first game, Broken Porcelain does still shine in its setting, music, and, to a slightly lesser extent, story. The Ashmann Inn feels like a Resident Evil location in many ways, not least of all its decor and mood. Because Stalkers are virtually always present, it’s usually unnerving to try to move quickly through the halls without setting off another chase. There’s a great tension in Remothered‘s best bits, aided by its haunting score that may come away as the game’s only purely good component. 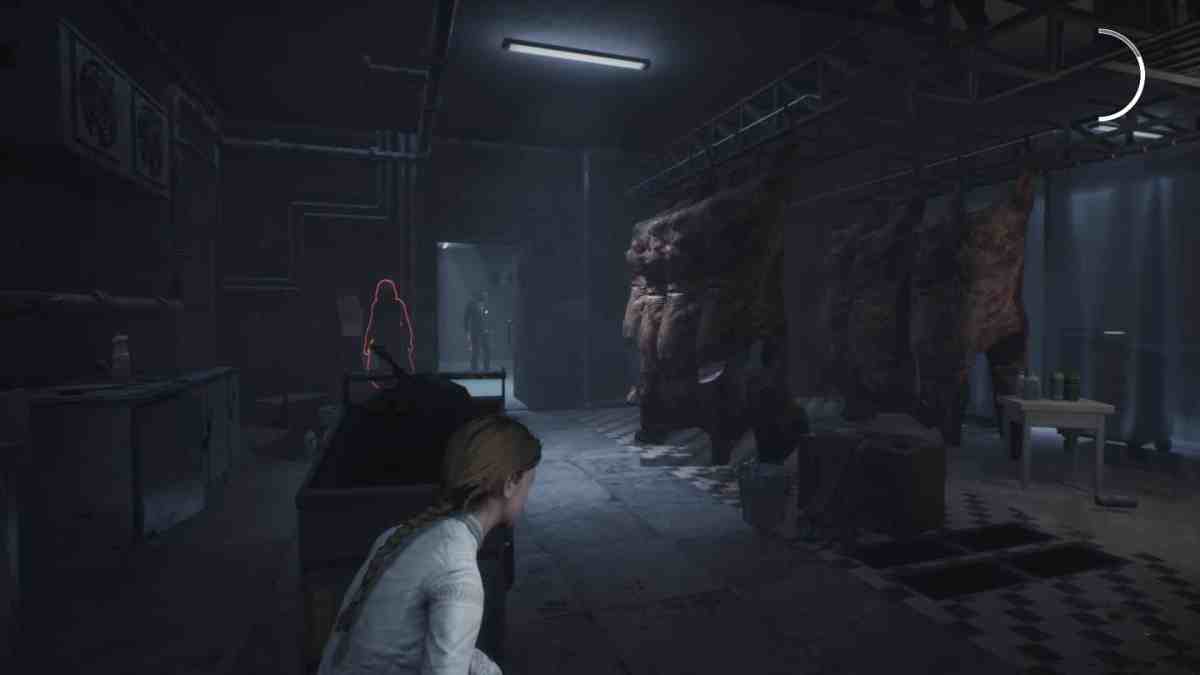 Its story is unlike anything seen in horror games, with plot details that are as messy as in Resident Evil but never as unintentionally comical. Playing as different characters this time around has helped not just continue the great premise of the first game, but push it forward in a satisfying way, even if the gameplay takes steps back due to the bugs. In a few months, Broken Porcelain just might be the fully recommended sequel it teases at being right now.

To the developers’ credit, one major patch has already been released that addresses many issues, but those I’ve described here all came after that patch. I didn’t bother to express what I saw in the unpatched version, which was also frustrating in different ways. It seems moving the game up a week to beat other horror games to the market could realistically hurt Remothered more than the admittedly daunting task of launching day and date with Amnesia: Rebirth like it was once scheduled to.

I don’t blame Stormind Games for sensing that urgency, but it seems obvious now to me, and perhaps to the team, that a more polished Remothered: Broken Porcelain is a better proposition than the version we got, rushed to the store before it was ready. Remothered: Broken Porcelain doesn’t deserve to be your Halloween stream of 2020, but give the team some time and they may be able to piece it back together.