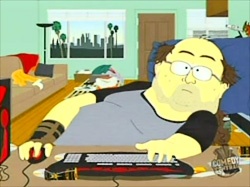 Women comprise 40 percent of gamers in the U.S., a new ESA report found.

The Entertainment Software Association released the report, “The 2008 Essential Facts About the Computer and Video Game Industry,” during E3 last week.

“This new data underscores the fundamental principle that computer and videogames are a mainstream entertainment form, which captures the imagination of every segment of our society,” said Michael D. Gallagher, CEO of the ESA.

The study, based on a survey of 1,200 households with a PC and/or a gaming console, found that two-thirds of households play video or computer games, the average age of a gamer is 35, and that game-playing women over 18 are almost twice as numerous as boys 17 or younger.

In other words, the image of gamers made popular by satires such as those presented in South Park (pictured) are no longer accurate.