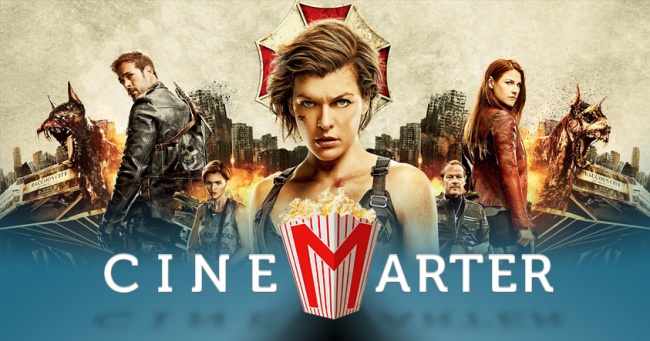 One of my greatest cinematic “sins” – according to “serious” movie people – is probably how much I enjoy the Resident Evil movies. Even the bad ones are still generally entertaining to some degree. The newest one has been subtitled “The Final Chapter,” and has been promoted as being the last one of the series – before the inevitable reboot, of course. If true, it’ll be something about which I’ll be a little sad, honestly. I’m also a little sad that the purported conclusion of the franchise goes out on a low note.

Remember how awesome the final shot of Retribution was? You’ve got these characters all standing in unison, ready to take down a gigantic army of infected creatures – some of whom we’d never before seen. One could reasonably expect the sequel to follow up on that. It does not. We open in DC rubble, everyone but Alice (Milla Jovovich) presumed dead – and she’s pretty close. A couple of lines of dialogue will later explain what happened; we get to see none of it. That huge battle we were promised is something we will never see. I can only assume this was due to The Final Chapter‘s budget getting slashed by $20 million. Curse you, Sony! 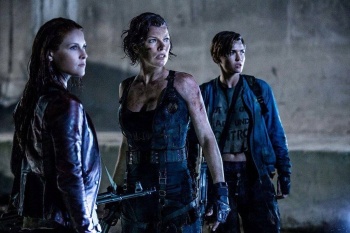 Moving past that, we soon get to the crux of the story. Alice is told that the T-virus – the thing that killed almost everyone, turned the dead into zombies, and mutated other creatures into evil monstrosities – actually (and conveniently) does have a cure. It’s back in Raccoon City, in the Hive from the first movie. She has 48 hours to get it or else what’s left of humanity will be wiped out. How or why? Doesn’t matter. Get to Raccoon City, get the cure, save our species.

Along the way, she’ll encounter a couple of characters from previous movies – Dr. Isaacs (Iain Glen) is back as our main villain; he’s joined by Albert Wesker (Shawn Roberts). Claire Redfield (Ali Larter) also returns. Having sat out the last film, we find her leading a new settlement of people who are here to both help Alice and provide useful cannon fodder whenever we need to feel like the zombies/death traps might be worth caring about.

Basically, we’re going back to Raccoon City to tie up a couple of loose ends – Alice’s history and the Umbrella Corporation’s motivation, primarily – and provide a nostalgia trip for those of you who are very fond of the first movie (for whatever reason). Yeah, that laser room was cool – this is now, I believe, the third film in which it’s been featured. It’s no longer fun. And could we not find a better villain that Dr. Isaacs? He doesn’t even get to mutate in this one; he’s just got that Sherlock Holmes “predict-a-move” fighting ability for some reason.

So, we’ve only got a couple of the protagonists of the previous movies, a story that’s barely relevant, and villains we’ve seen and beaten before. What else does The Final Chapter have to offer us? Well, it’s the most jump startle-filled entry, so there’s that. It also features the poorest editing. It’s so choppy that you will actively struggle to tell what’s going on or who’s doing what to whom for the majority of the action. It doesn’t earn any of the gleeful fun that usually comes from murdering zombies in this semi-serious series. It’s just confusing. Much of it also takes place at night, which means it’s already harder to tell what exactly is happening. Add in the darkness that comes from 3D, and you’ve got a disastrous scenario.

It comes down to Resident Evil: The Final Chapter not being as fun as the previous installments. Is it ever dull? No, not really, although there is a significant amount of exposition as it tries to tie up its loose ends. But the action is headache-inducing, we’ve seen pretty much all there is of these characters – and the more interesting ones aren’t included – and we don’t even get to explore new territory. It’s a necessary entry from a story standpoint and to give the audience a sense of closure on a few points, but it’s not all that enjoyable to watch.

It was 15 years ago that the first Resident Evil graced the screens, and we can now bring the story to a close – kind of. I have no doubt that it’ll be rebooted shortly, as these movies make far too much money to leave the rights on the shelf. This final entry isn’t great – the action is poorly edited, it’s got a lot of exposition, and many of the characters we want to see weren’t brought back – but it is a fitting enough way to end things. Farewell, Resident Evil!

Bottom Line: It fills in a few holes for the audience, but beyond that, the action isn’t very good, it’s filled with jump startles, and it skips over the promise the last film made.