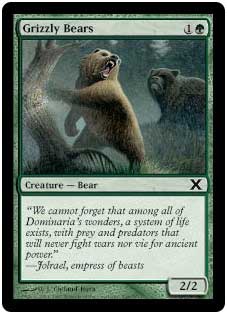 When it comes to playing Magic: the Gathering, resource management is always the name of the game. Whether you’re defending your dwindling life total, counting up your lands to cast a game-changing spell, or wishing that you had a few more cards in hand, you’re dealing in game resources. When you’re still learning to play, the only resource you tend to concern yourself with is Mana. Mana allows you to cast spells and spells allow you to win the game. That seems simple enough. But what happens when you run out of spells? What’s the best way to handle a swarm of attacking creatures?

These other resources tend to be relegated to more advanced play, though I think that’s just to keep things as simple as possible for newcomers. It doesn’t take much more wisdom to play with your Life Total as a resource than just Mana. It’s just one more dynamic to watch during the game!

Life Total
Using your life total as a resource can be intimidating – scary even – as your life total shrinks and you’re left wondering how you can be so close to defeat. It’s simple enough when you think about it, though. An opponent is at 2 life while you sit at 3. They have no cards in hand and are attacking you with a 2/2 Grizzly Bears with no other creatures in play. Do you block and trade with your own Grizzly Bears or do you take the damage? You can survive a hit from the bear. The opponent, however, cannot. It’s folly for them to be attacking here, but it’s a demonstrative scenario, so we’ll let it fly. If you let the bear through, in order to get your own bear through, you’re using your life total as a resource. You have opted to take 2 damage in order to deal damage to the opponent and thus win the game. Of course, if they had a Giant Growth or a Lightning Bolt in hand, the situation would be a little different, but we’ll get to that later.

Some cards look to use your life total more directly. Necropotence, for example, effectively lets you pay life to draw cards. While Channel lets you pay life to add mana to your mana pool. These direct 1 to 1 exchanges are so powerful that both of these cards are banned in the Legacy format. Using Channel, for example, means that you can use your life total to burn your opponent with a Fireball, potentially as early as Turn 1. This does not make for a very interesting game.

Phyrexian Mana is a mechanic in Standard that seeks to use life directly as a resource. Vault Skirge, for example, costs 1 colorless and 1 Phyrexian Black mana which can be paid with either 1 Black mana or 2 life. That means that you can drop it first turn! A 1/1 with Flying and Lifelink is not bad for a virtual 1-drop!

Card Advantage
This is a trickier subject, so I’ll direct you first to the Wikipedia article which details it, in case you’d like a more in-depth analysis. If you’ve read the article, then this should mostly be familiar to you but, in the interest of inclusion, I’ll recap much of what it said. In short, each card you have access to, be it on the Battlefield or in your hand, counts toward card advantage. Each player begins the game on equal footing with 7 cards. That is, of course, unless you’ve Mulliganed, in which case you’re trading card advantage for a new opening hand! If you choose to play first, you’re sacrificing card advantage again for the opportunity to take the first turn.

If you cast a spell that allows you to draw 1 card, like Think Twice, you’re just breaking even (until you cast it again with Flashback, at least!) If you cast a spell that allows you to draw 2 cards, then you’re gaining +1 card advantage. Similarly, if you Doom Blade an opponent’s Craw Wurm, you’re breaking even or ‘trading’. If you cast Day of Judgment when they have two creatures in play, you’re getting a 2-for-1. You’ve destroyed two creatures with a single card from your hand. Finally, and slightly less prevalent, there are discard spells. Spells such as Mind Rot force the opponent to discard two cards, giving +1 card advantage to the caster. Other discard spells, such as Despise, allow you to look at the opponent’s hand and choose what they will discard, which is arguably more powerful even though it merely trades 1-for-1 with an opponent’s card. 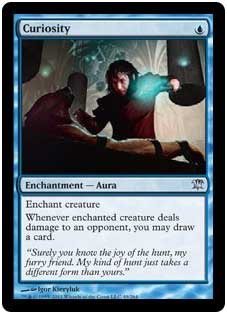 Probably my favorite Card Advantage spell right now is Curiosity. This aura, when cast on an evasive creature like the Unblockable and Hexproof Invisible Stalker, allows you to draw an extra card every time you attack and deal damage to the opponent. This can be incredibly powerful in a deck which seeks to gain the advantage in a longer game. Spells like the aforementioned Think Twice that have Flashback also constitute Card Advantage once they’re in your Graveyard. You can cast the spell straight from your graveyard for its Flashback cost, which basically acts like having that card in your hand again. This also allows spells like Forbidden Alchemy to generate additional card advantage by ‘milling’ you, or putting cards from your Library into your Graveyard. (See Millstone for the origin of that terminology.) Any Flashback spell you mill with Forbidden Alchemy behaves as Card Advantage!

Mana. Always Mana
There is a fine art of managing your mana, to be sure, but that is far too variable from deck to deck and game to game to really allow for thorough treatment here. I would like to take a moment to discuss what it means to manage your mana, however, as I often see people losing matches due to mana management issues.

First off, there’s Blue. If you’re playing Blue and you have a Counterspell of any sort in hand, then it’s usually worthwhile to pass your turn with enough mana to counter the next spell the opponent casts. Mana Leak, for example, is an incredibly efficient counter, and if you aren’t on the ropes already, it’s usually recommended to keep Mana Leak mana available during your opponent’s turn. If you can afford to cast something big on your turn, your opponent can probably afford something just as game-changing on theirs, so it’s advisable to be able to counter it! Of course, this goes both ways. If you’re playing against Blue, and they are leaving 1U available every turn, they’re probably sitting on a Mana Leak, and you should play around it by sitting on your big spell until you can afford the extra 3 mana it will cost when it gets leaked!

Next we’ve got things like Regenerate abilities on creatures. Let’s look at Cudgel Troll here as a simple example. His Regenerate ability costs G to activate, and you’re playing against a Black deck with plenty of removal. Instead of casting him when you hit 4 Forests, you can wait until you’ve got 5 so you have the extra mana to Regenerate through a Doom Blade. That makes him a very poor target for their removal spells and it works for Day of Judgment, too!

On the same token, keep an eye out for Combat Tricks you can cast when attacking or blocking. As with our earlier scenario, if you’re on the losing end of the exchange, but you’ve got a Giant Growth in hand, as long as you leave mana up to cast it, your opponent is forced to block your Grizzly Bear, otherwise you can Giant Growth your bear and win immediately! If they trade bear for bear, then you’ve got the options of either saving your bear with a Giant Growth, or casting a different spell after combat, but by keeping the mana available during your combat step, you forced your opponent to do something they may not have otherwise done. Controlling an opponent’s actions is a sure way to win a game of Magic!

While this covers the most basic of game resources, there are many other factors which can be considered from a resource management perspective. While covered under the umbrella of Card Advantage, Creatures on the Battlefield can be considered another resource, especially for a creature-centric deck like Red Goblins. In some cases, you’ll be happy to attack into larger defenders just to eke a couple extra points of damage through. You can also use them more directly as resources with spells like Goblin Grenade, which lets you sacrifice a Goblin to deal a whopping 5 points of damage, a full quarter of your opponent’s starting health. Being sure to maximize your creature’s value is key to making these plays work, of course, and takes a bit of practice to really get down to a science.

What kind of resources do you focus on? Do you tend to guard your life total at all costs, or do you like to take the hits until it gets down to the wire? Do you play a fast deck that doesn’t care about long-term card advantage, or a late-game strategy that requires a draw engine?