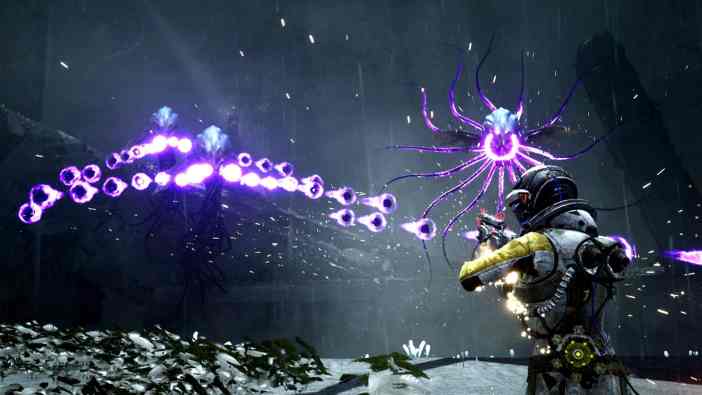 “If at first you don’t succeed, insert coin to continue.” That was the principle behind the vast majority of old-school arcade games. And while Returnal doesn’t actively plunder your wallet, it’s been giving me nostalgia-drenched flashbacks to my youth and to all the pocket money I frittered away at my local arcade.

More than one outlet has picked up on Returnal’s arcade influences, with developer Housemarque’s own Mikael Haveri remarking that the time-looping shooter is “true to our arcade roots.” Certainly, the first commercial release from Bloodhouse, who’d later become half of Housemarque, was Stardust, a (then) visually striking update of Atari’s Asteroids.

But Returnal is truer to arcade gaming than even Stardust. According to Wiktionary, an arcade game is one “that shares traits of coin-operated video games, such as short levels, simple and intuitive controls, and rapidly increasing difficulty.” That’s a reasonable definition, but it overlooks the overriding purpose of arcade machines. Arcade machines were, first and foremost, money-makers.

My local arcade was no different. I’d head out at lunchtime and make a beeline for my town’s solitary amusement arcade. The sneaky thing about arcade machines was that the owner usually had the ability to alter a machine’s difficulty. If players were turning their nose up at a machine, the owner could make it easier so it’d be more palatable for those who walked in clutching their precious pocket money. Or if people were coasting through a particular game, they could make it a little trickier. 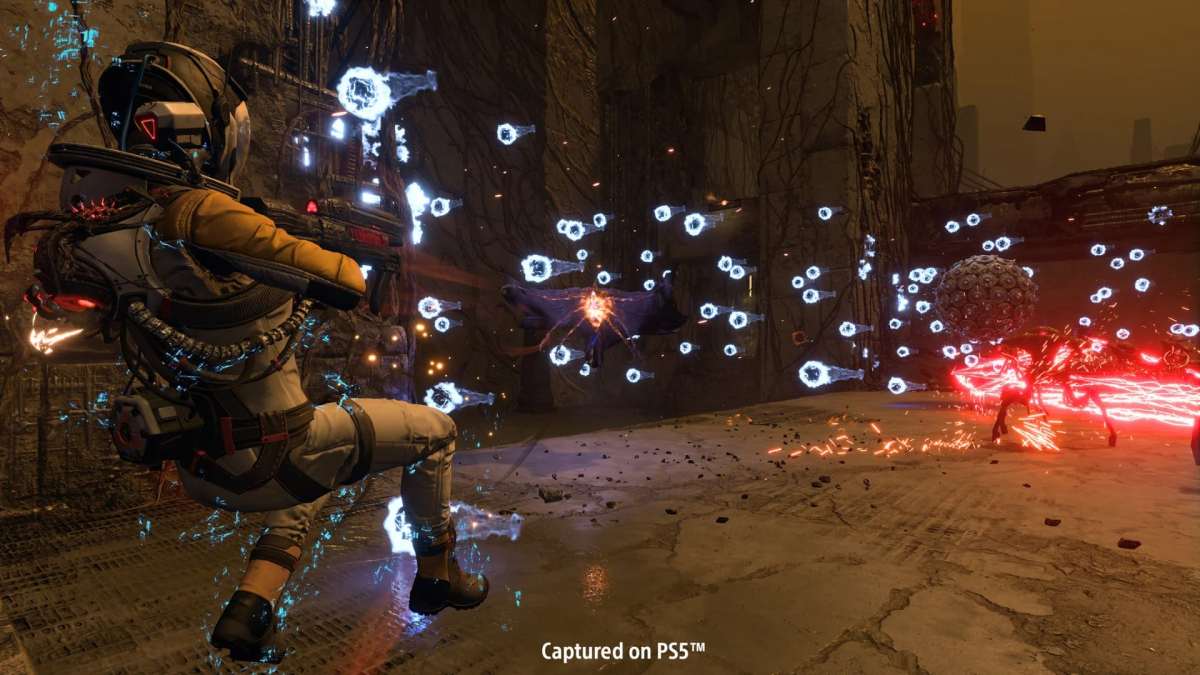 It was entirely possible to come back the next day and discover a game you were playing yesterday was suddenly harder. Ultimately, though, it was all about finding a machine where you felt like you were slowly making progress, that you learned a little from each playthrough and that just one more go wasn’t a waste of money. So whenever I entered that arcade, crossing the uncomfortably sticky floor, I’d home in on whichever machine scratched that itch.

Returnal likewise hits that sweet spot, fostering the notion you’re not wasting your time diving back in again and again. I know that, if there were a coin slot on the side of my PlayStation 5, I’d have emptied three piggy banks’ worth of loose change by now. In fact, I can almost detect the faint whiff of cigarette smoke that was my childhood haunt’s trademark.

Returnal has also taken me back to my bad old habit of looking over other players’ shoulders, the kind of behavior that would get me the occasional glare back in the day. Not literally, this time around, but my desire to see Returnal through has led me to many a YouTube video. Once again, I’m watching other people play, in the belief that there’s some secret wisdom I can absorb.

Then there are the bosses, my God, the bosses. No matter how many times Dark Souls’ boss monsters might steamroller you, there’s one small consolation: Once that energy bar is empty, your nemesis is dead. Returnal makes use of a feature that, while it crops up every now and then, was commonplace in the heyday of the arcade — multiple energy bars. You might be having your backside kicked by the secret lovechild of Cthulhu and Jabba the Hutt, but when they’re down to half a bar, you can at least pretend you’re in the home stretch. Returnal’s multiple energy bars make it very clear that victory’s not yet within your reach. 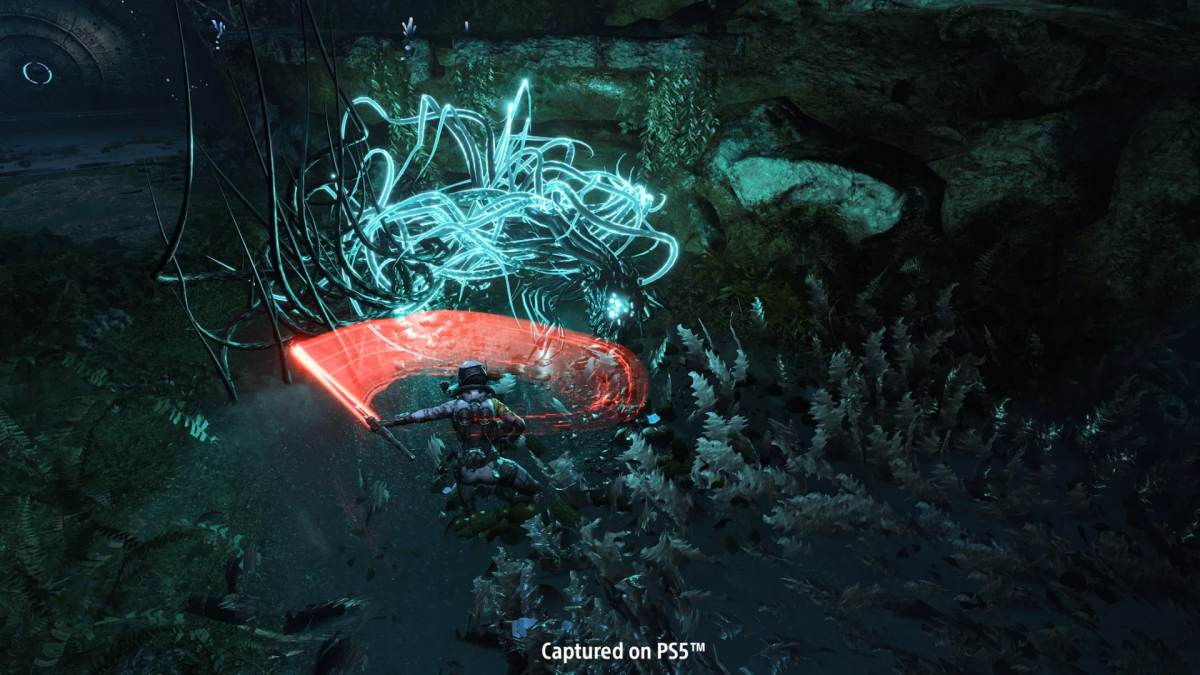 But you know what can speed you to victory? The right weapon. In Assassin’s Creed Odyssey, I never cared about what weapon was in a chest because I knew there’d be an equivalent within reach. Returnal, on the other hand, makes weapon drops precious enough that it gives me flashbacks to blasting my way through Metal Slug. Each level I’d cross my fingers that the last drop before the boss gave me homing missiles or something to at least make the upcoming fight a little less challenging.

Returnal has that same kind of gnawing tension; each time I crack open a chest I’m praying for a Tachyomatic Carbine, rather than the middling Spitmaw Blaster. This element of chance, commonplace in rogue-lites but with its roots firmly in the coin-op world, feeds into the desire to keep returning to Returnal. What if — just, what if — you got really lucky this time? What if you ended up with the “extra life” parasite and a level 2 carbine? It’s got to be worth a shot, right? The lack of a save option and the way that it’s built for bite-sized runs (which reward you with more lore) add up to a game that feels like it belongs in an arcade cabinet.

Despite being a showcase for a new console generation, Returnal has much, much more in common with the arcade coin-ops of old. Is it going to kick-start an arcade renaissance? Not a chance — for the most part, amusement arcades are as dead as protagonist Selene’s many, many corpses. She may be lost in space, but my having grown up with those challenging coin-guzzlers, Returnal’s big arcade energy feels a lot like going home.