“You say that the difficulty when you unlock ‘The Tiger’ is a big flaw. But maybe that was part of the point. I think the game is meant to make you feel like an unstoppable warrior of death by the end, a bit like Kill-Bill.”
– yellowhead

You make a point I was intending to address in this column; well done. Because I sort of agree. It is fun to be an invincible whirling cloud of stabs and murder (case studies: Prototype and Just Cause 2), especially when you began in a vulnerable position. As much as my relationship with them has fluctuated lately, games with upgrade systems have a fairly clear advantage over games that don’t, and that’s giving a sense of skill development. Or to put that another way: Nothing is more satisfying than beating up your former bullies.

Maybe it’s just because I have a fondness for revenge stories. I list my all-time favorite book as The Count of Monte Cristo. I know it’s a bit smug and literature-wanker to cite anything more than 100 years old as an absolute favorite, but it’s worth remembering that Dumas was the populist pulp writer of his time and Cristo is full of juicy swordfights and prison breaks to keep the peasants interested. I love to see a hero brought down by casual prejudice, only to rise from the abyss and bring a spectacular retribution, preferably in the form of a juicy swordfight.

In a game, being able to go back to starting enemies that were very troublesome at the time and bring fully upgraded fiery conflagration to them and their flimsy homes is always a highlight of any game with RPG elements. It’s good game design, too – gives the player a sense of how far they’ve come. It was a smart move on World of Warcraft’s part to put all the major cities right next to starting areas, ‘cos you have to revisit them constantly and every time you do, you can reduce the local wildlife to increasingly flatter piles of raspberry jam. This was the problem with Oblivion – the enemies all leveled up parallel to you. First rule of mathematics, people: when you add something to both sides of an equation and nothing changes, you might as well not have bothered.

Red Steel 2 (incidentally, a game with no shortage of juicy swordfights) does the revenge thing quite well. The starting baddies are suitably difficult at first and talk a suitable amount of smack, and from a certain point onwards you’re suitably powerful enough to pound them right into the floor. Unfortunately, the “revenge moment” lasts from around the mid-point to the end of the game. Revenge is fun, but it’s a little ancillary fun. The bulk of the fun in playing games comes from being challenged. This is why they had to introduce that kryptonite stuff to the Superman mythos: It’s just boring otherwise.

I’m certain I’ve mentioned this before: A game should constantly introduce stronger enemies, then unlock stronger player attacks, otherwise you lose the all-important difficulty curve. Enemies in RS2 do get stronger, but the weaker enemies are still everywhere and your best attacks are unlocked early and work on everyone. Right up to the end of the game I was still getting ambushed by groups of first-tier baddies. Throw about fifty of them at me and then maybe I’ll break a sweat, Red Steel 2. Or my wrist. Fucking wiimote. 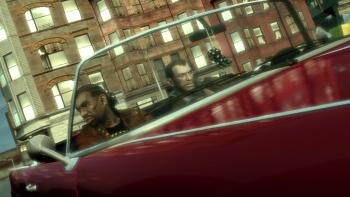 “Three weeks and no updates on Fun Space Game: The Game in Extra Punctuation? Mana Bar keeping you busy? I am really enjoying reading the thought process behind game design.”
– Joseph McCain, via email

I kind of hoped everyone would stop caring, but since you ask; yes, I’ve been too busy to do much work on FSG:TG. I’m also getting a little bit bogged down in creating the model of the first Wheel ship. Probably because I’ll have to do some more programming once it’s finished, and nothing good ever comes of that.

But I have been thinking ahead, specifically about the protagonist and how to characterize him. Once again, the things we already know about him from the gameplay choices can fill in a few blanks. We know he’s a pilot who makes a living salvaging junk from crash sites, so he doesn’t exactly have a stable income and he’s not too proud to be a bottom feeder. And we know that at some point he’ll be willing to antagonize a huge, resourceful organization of armed fanatics despite having only a tiny salvage vessel to his name. So this all paints a picture of a man who has perhaps fallen from grace and no longer gives a shit whether he lives or dies.

What I’m reminded of at this point is Niko Bellic. Regardless of my opinion on GTA4 as a whole, Niko is one of my favorite game characters of all time. The GTA games have always had to walk a bit of a tightrope with their protagonists. Since there is a 100% certainty of players acting like psychotic dickburgers, the main character’s personality has to contain the possibility of suddenly flipping out and putting a rear bumper through an old lady’s pelvis. In all the previous games they took fairly easy routes: In GTA3, they just went with a silent protagonist. In Vice City, Tommy Vercetti was just an angry lunatic. In San Andreas, CJ was a fairly normal bloke trying to help his fellow man, and that rang most falsely of all as swath after swath of pedestrians fell ‘neath his iron steed.

But in IV, they managed to create a very human, very relatable character who could still believably lose his mind. A cynical veteran; so jaded, so completely broken by all the horrors he’d both witnessed and executed that absolutely nothing could shock him anymore, not even his own actions. That really spoke to something in me. Either that or his sexy accent.